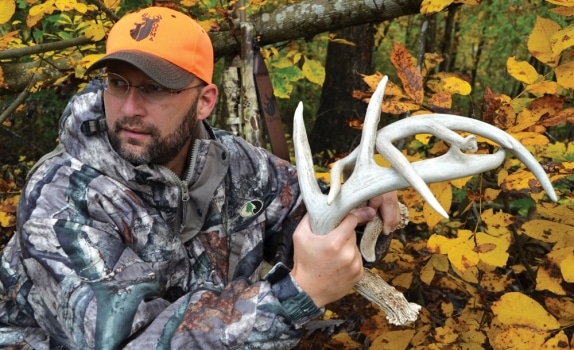 It’s November, and over the next few weeks millions of deer hunters will be hitting the woods in hopes of taking home a giant. Many will attempt rattling but will fail to see any response except squirrels scattering and chattering at the imaginary buck fight from 15 feet up — leading them to think, “Why in the world does this work on outdoor television and not for me?!”

Sound familiar? That’s where QDMA comes in, delivering science-based information about deer to its members since 1988.

Several years ago, deer biologist and avid hunter Dr. Mickey Hellickson of Texas set forth on a three-year research project to learn what type of rattling sequence attracts the most bucks. Two-man teams rattled loudly and softly, in both short and long bouts. They broke branches and scraped the ground.  They did it at all times of the day and throughout the hunting season, specifically during the months of November and December. They even had some radio collars on bucks so they could locate them, approach, rattle, and monitor the response. I studied their results and compiled it into 10 tips that will vastly improve your response rate when clanging ivory this fall.

2. On Cool, Cloudy Days with Light to No Wind. Researchers found that buck responses increased as temperature and wind decreased, but as cloud cover increased. Obviously, wind speeds directly impact a buck’s ability to hear the mock antler battle you’re creating. It’s unknown why cloud cover impacted the response rate, but it did, particularly when it was above 75 percent. Perhaps the increased visibility from less glare and/or low barometric ceiling increased the bucks’ ability to locate or hear the origin of the sound. That, and cooler temperatures, all added up to ideal conditions for rattling.

3. During Peak Rut, or Start of the Post Rut. Simply put, to see the most bucks from your rattling efforts, do it during the peak of the rut. Hellickson and crew saw greater than one buck per attempt (108 percent) during the breeding season, though this included bucks of all age groups. However, to increase your chance at rattling in a mature buck, break out those antlers just as the rut seems to be quieting down. Though the response was lower (55 percent) compared to the rut, the majority (69 percent) of bucks that did respond during this later period were 3½ or older. It’s at that time when most mature bucks are likely done tending or chasing receptive does and will be on the prowl to locate any “leftover” does that have yet to be bred.

4. From Up High. The two-man teams in this study consisted of a person on the ground rattling, directly upwind from a person in a 30-foot observation tower. Both were in full camo. Amazingly, of responses where the observer spotted a buck making a move, the researcher on the ground failed to see 57 percent of them. Granted this study was performed in South Texas where ground visibility can be limited, but it begs the question, how many times have you rattled in a buck and simply didn’t see it? So, climb up high or at least rattle where you can see a long way. This will improve your view and help the sound travel further.

5. Looking Downwind, But So You Can See/Shoot Everywhere. Although its wise to be able to observe and shoot safely in multiple directions, researchers in this study found that 60 percent of all bucks responded initially to the downwind side of the rattling sound. However, when the researchers were rattling downwind of radio-collared bucks, the majority of these deer moved directly downwind to investigate before moving back upwind of their original location. So, be at the ready on your downwind side, but keep your eyes peeled because you never know what can happen.

6. Loudly. Very, Very Loudly. Perhaps the most telling statistic from the entire project, loud rattling sequences resulted in nearly three times more responses than those done quietly. Hellickson suggests to start softly with your first sequence to avoid alerting any deer hidden close by, but after that to rattle as hard and loud as possible to maximize the distance of the sound and the number of bucks that hear it.

7. Like You Mean It. Being aggressive isn’t just for cheerleaders. Try to make as much “natural” noise as possible during the rattling session by breaking branches and kicking dirt and brush. When bucks fight, they aren’t afraid to hit their knuckles. Also, because researchers were able to get their hands on some bucks in this study to collar them, they looked at the response of big-antlered bucks versus those that scored lower. They found the higher-scoring bucks responded more often (67 percent) than smaller bucks (50 percent).

8. Length Doesn’t Matter. There was no difference between the response rate when Hellickson divvied up the episodes by long and short rattling bouts. However, he also advises to not go longer than two or three minutes before stopping for about seven or eight minutes. This offers you the chance to look for movement, make additional, softer mock sounds like grunting or rubbing a shed antler on nearby saplings or brush, and pick up your bow or gun. That will minimize the chance of any responding buck spotting you, and it will also allow you to be ready when it all comes together.

9. Don’t Move. It’s worth staying put once you commit to rattling in any particular location. Although performing three, consecutive, 10-minute rattle sequences as described above resulted in gradually decreasing response rates (44, 34 and 22 percent, respectively), it’s likely still worth sticking it out because any response at all could be the buck of your dreams. Case in point, Hellickson and his team located and rattled to 11 different collared bucks multiple times. Four of the bucks didn’t react to the first sequence but approached the second time around.  What’s more, seven of the collared bucks moved closer every time they were within earshot, suggesting that bucks will continue responding to rattling even if they had been called in before.

10. Practice Quality Deer Management. Overall, Hellickson saw a 65 percent response rate (and 73 percent for collared bucks) when rattling during this study, suggesting at least two of every three attempts at rattling (and possibly three of every four bucks) should result in a positive response, at least when the buck age structure is balanced like where this research was performed. When you protect yearling bucks and increase numbers of older bucks in the population, you get much higher response rates with grunting and rattling. Of course, the deer population at the study area was also moderate to high because the habitat was properly managed, and the buck:doe ratio was fairly balanced as well. These are all goals of QDM. So if you want to increase your success with rattling and calling, and enjoy more exciting hunts, start by learning more about QDM and the QDMA.

Unfortunately, there is a lot of misinformation on the Internet about how to improve your deer hunting, including tips on how to rattle in more bucks. I’m sorry to say that all too often these scripts are based on opinion rather than science.

Do yourself a favor and join QDMA today. Then sign up all your hunting buddies.  We make hunting more fun and we will make you a more successful deer hunter.

Now go forth and rattle.