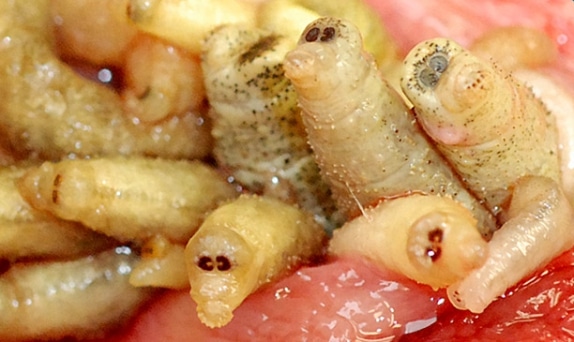 You may not want to know what I’m about to tell you: Whitetails are virtual school buses for parasites. They are packed from nose to tail with mucus-covered lifeforms.

The good news is these parasites are all completely harmless to people, and if you’d like to remain happily ignorant of their existence, I suggest you stop reading now.

On the other hand, if you are fascinated by the diversity of life on planet Earth and have a strong stomach, keep reading, because the whitetail is an ecosystem unto itself. You may be able to locate and recognize some of these charming parasites the next time you are field-dressing a deer.

Let me repeat: None of the parasites I am about to describe can infect or harm people. In most cases, they don’t even harm the deer. All deer carry parasites like these, and some of them are even vital, like the micro-organisms that live in a deer’s gut and help it digest food. However, deer living in unhealthy conditions where there are too many deer for the habitat to support usually host more parasites, because their weakened state of health makes them less able to fight off invasion. Deer hunters can help keep parasite problems to a minimum simply by maintaining balance between deer numbers and available nutrition.

In extreme cases, individual deer can become weakened and sick as a result of hosting too many parasites, and secondary infections can result. It’s never a good idea to eat any deer that appeared sick or emaciated when it was killed. Otherwise, if you find any of the following parasites in a healthy deer, don’t worry: The venison is perfectly safe to eat.

With special thanks to the Southeastern Cooperative Wildlife Disease Study at the University of Georgia for supplying the photos, let us begin our internal tour. Hold on to your lunch! 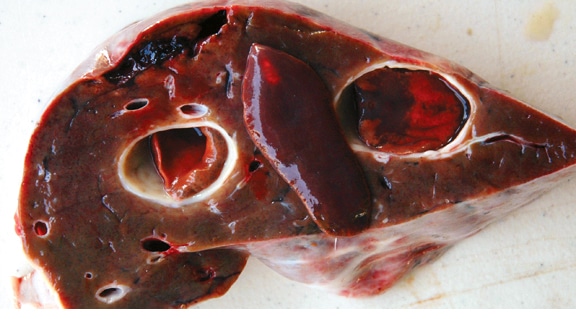 This beast will give pause to any hunter who enjoys deer liver ‘n onions. The 1- to 3-inch long, leech-like fluke is the adult stage of this parasite, and it resides in capsules inside a deer’s liver and feeds on blood. The photo above shows a sliced liver, revealing capsules containing adult flukes, and another adult fluke is seen lying on top of the slice. Eggs from the adult are passed out in deer scat, and the larvae infect certain species of aquatic snails. Later, another life stage emerges from snails and climbs up aquatic vegetation, where it waits for a deer to eat the plant and complete the cycle. 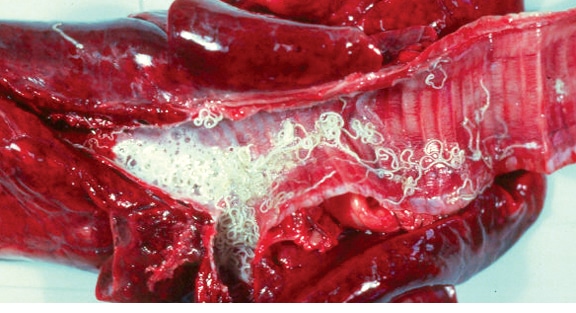 f you cut into a deer’s windpipe or lung passages and see long, spaghetti-like nematodes slithering around, you are looking at the adult lungworm. Larvae from this parasite crawl up the windpipe, become swallowed, pass out in scat, mature, then climb up vegetation to be consumed by other deer. They then migrate from the stomach to the lungs to mature into adults. This parasite is one of the first to become a problem when deer are over-populated, and they can become so abundant in each deer that “lungworm pneumonia” makes it difficult for deer to breathe and thrive. 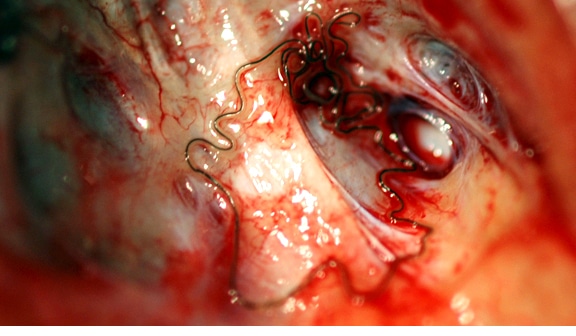 s an adult, this nematode lives in the meninges, which is the sac or tissue layer surrounding the brain. In heavy infestations, they can cause neurological and behavioral problems. Like liver flukes, meningeal worms rely on snails and slugs for part of their life cycle, except deer must actually eat infected snails or slugs accidentally while browsing on forage to become infected. Larvae work their way from the digestive tract to the spinal cord of deer and eventually to the brain. Meningeal worms can infect and cause neurological disease and death in a a number of species, including elk, moose, and exotic deer. It is one of the big concerns with legal and illegal movements of captive deer and elk, because this parasite can be introduced to new areas and affect wild deer, elk and moose populations, as well as some domestic livestock species. 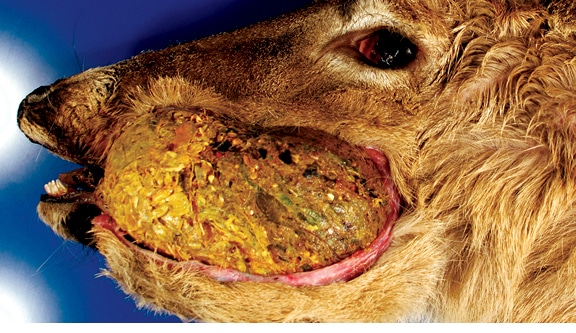 Ever see a deer that appeared to have a very large chaw of tobacco in its cheek? This deer likely is the victim of a parasite called an arterial worm, because the adult lives in the carotid arteries in the necks of whitetails. When enough worms are present, they can reduce blood flow to the muscles of the jaw, interfering with the deer’s ability to chew and swallow, so food builds up in the cheek or under the tongue (in the photo, a dead deer’s cheek has been sliced open to reveal the impacted food). This affects the ability to acquire adequate nutrition and can lead to emaciation as well as secondary infection at the site of the food impaction. The parasite uses a horsefly for its life cycle. Larvae are siphoned up by horseflies that bite and feed on the blood of infected deer. They mature, migrate back to the horsefly’s mouth parts, and are transmitted back to the next deer bitten by the fly. The larvae spend time first in a deer’s brain before migrating to the carotid artery to become adults. 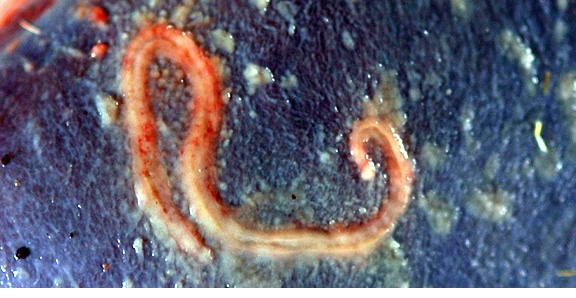 This strange worm lives freely in the abdominal cavity of deer among (not inside) the organs, so they may be seen by hunters when field-dressing their kill. The adults look like thin, white noodles. Larvae live in deer blood and are sucked up by mosquitos. They develop inside the mosquito and are then injected into other deer that the mosquito feeds upon. Sometimes, dead abdominal worms are found encapsulated on the surface of a deer’s liver, as shown in this photo. 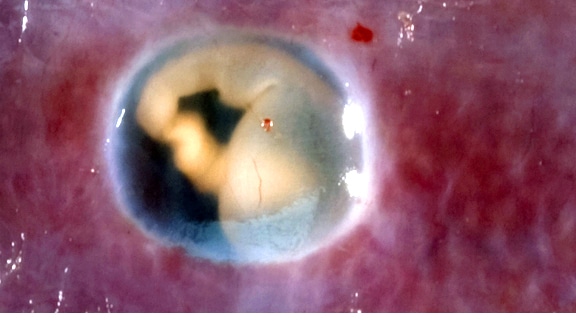 Deer host this interesting parasite only in its larval form, which is found in small cysts on the surface of a deer’s liver. The cysts look like small bumps about the size of an aspirin tablet (the photo shows one slightly enlarged). When a deer dies, if the liver is eaten by a canine (like coyotes, dogs or foxes) or a feline (like a bobcat), the larvae develops into an adult tapeworm in the intestines of the predator. Eggs are shed in the scat of the canines or felines, larvae are picked up by deer feeding on vegetation, and the process starts over. Cooking a deer’s liver will kill any larval tapeworms, but even if you somehow ate raw deer liver with tapeworm larvae, you would not be affected. This species of adult tapeworm affects only dogs and cats. 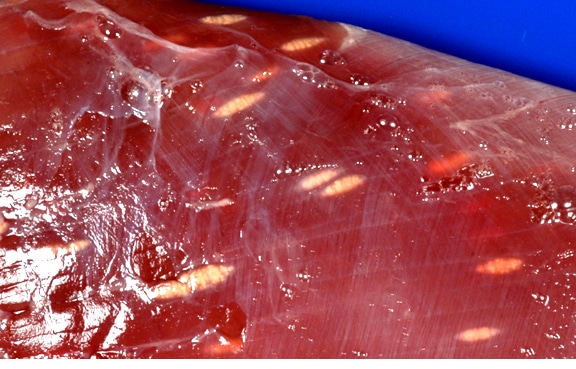 This parasite is a protozoa (single-celled animal) that has a two-stage life cycle involving deer and their predators. Deer consume the protozoa accidentally when eating or drinking. The parasite migrates to muscles, where it develops and forms visible cysts (seen in this photo of deer hindquarter muscles). If canine or feline predators consume this muscle, the next stage of the parasite develops harmlessly in their digestive tracts before being passed into the environment again, where deer can encounter it. One species of this parasite infects ducks and is known among waterfowlers as “rice breast disease” because the cysts in the breast muscle look like rice grains. 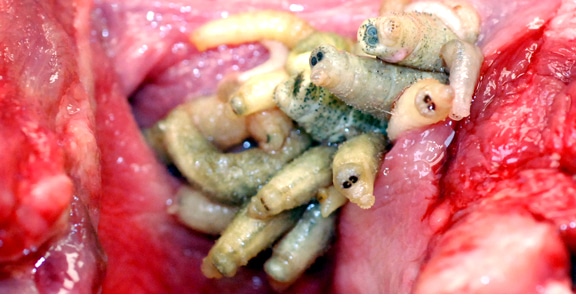 Few horror movies have ever achieved the shock value of actually witnessing a giant maggot crawl out of a deer’s nostril. I’ve seen hunters refuse to touch their deer again after seeing a nasal bot maggot emerge at the skinning pole, and some wanted to dump the entire deer without saving any meat. If we discarded the meat of every deer that carried nasal bot larvae, few of us would ever enjoy backstraps on the grill. These revolting grub-like worms are the larvae of a bot fly, which lays its eggs in the nostrils of whitetails. The eggs hatch, and the larvae enter the nasal passages, where they mature deep inside the sinuses of a deer’s head. When they are ready for their next life stage, they crawl out of the deer’s nose and drop to the ground, where they morph into adult bot flies. Probably not a fun experience for the deer, but completely harmless to them, and to people.

But wait, there’s more! Though we were unable to track down decent photos of these last two, you might also encounter:

If you’ve ever cut into the backstraps of a deer and found thin, 1- to 3-inch-long worms threaded through the meat, you’ve seen muscle worms. Unfortunately, they tend to favor the muscles that we like most to eat! Luckily they are rare, and even if you see them, there’s no need to toss out good backstrap. The worms are harmless to people, other than being completely disgusting. Remove any visible worms, cook thoroughly, and enjoy the bonus protein!

Much like the lungworm, the large stomach worm survives on a relatively simple life cycle that only involves deer. Eggs pass out of the deer’s digestive system, larvae crawl onto low-growing vegetation and are consumed by other deer, and adult worms develop in the abomasum (fourth chamber of a deer’s stomach). Also like lungworms, stomach worms are a common sight in deer living in over-browsed habitat in high-density herds.

The truth is, we’re only scratching the surface. There are louse flies (or “keds”) that are often mistaken for ticks that live on deer hides, and there are multiple species of lice that inhabit deer fur. Even deer ears are habitat for ear mites.

Yes, maybe it’s best if you don’t take a magnifying lens to the next deer you kill.