Because our messages and mission are founded on proven science, QDMA has built a reputation over 31 years for knowledge and credibility – which means, among other things, that our members turn to us when they encounter something they can’t explain. We could almost staff a full-time Department of Mysteries just to respond to queries about weird whitetails, unexplained deer behavior and other phenomena. Sometimes we have an answer for these queries, but many times we can only provide guesses. Diagnosing injuries, diseases and deformities from photos is often impossible. Meanwhile, we have a growing file folder of weird whitetails. Here are some recent additions to the menagerie and a few older photos from the vault that we’ve never shared before. 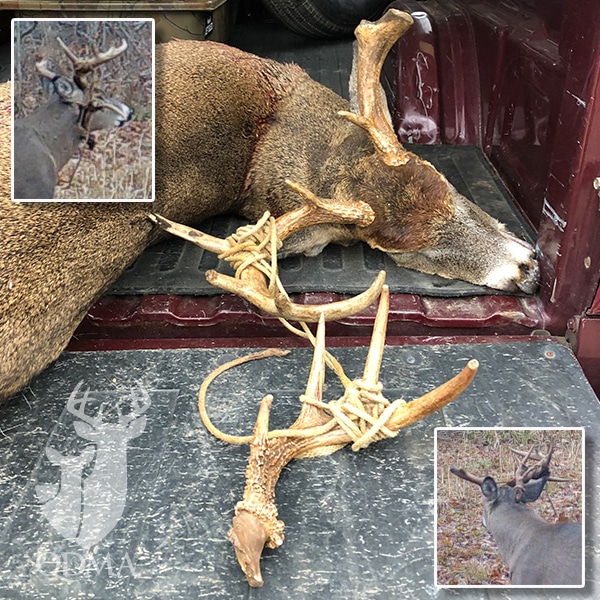 This buck was killed in 2018 on hunting land belonging to Denny Doren of Michigan. Hunters were surprised to find a length of old rope tangled around the buck’s antler, but more than that – another buck’s antler was also tangled in the rope and dangling from the buck’s head! When Denny checked his trail-cameras, he found photos of the buck walking around over several days with the dangling antler. As you can see in the photo, the other buck’s antler was more than just a shed: it was still attached to a sizable chunk of skull. One of the bucks must have become tangled in the rope somewhere, and when it fought another buck they both became entagled. Then, one buck was able to use the unnatural leverage to literally snatch off the other buck’s antler. Though Denny never found the other buck or learned its fate, chances are very good the injury caused by losing this much skull plate was fatal. 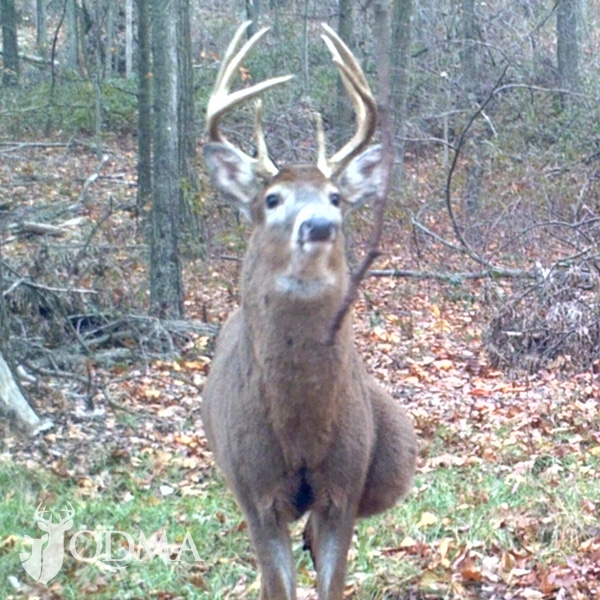 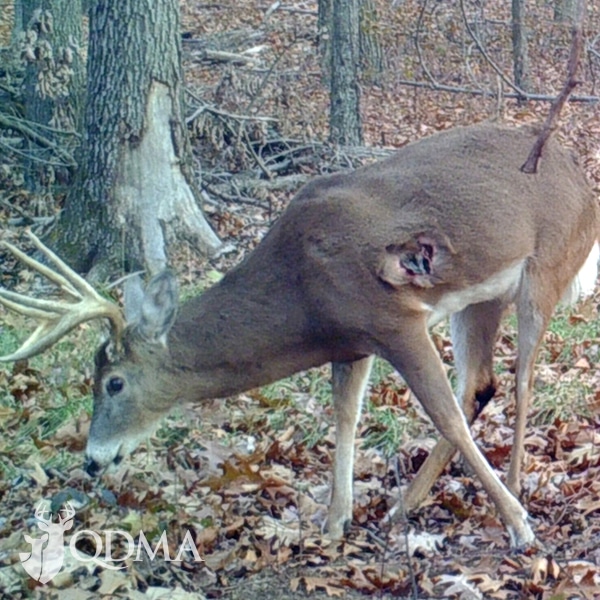 We often see photos of deer with various unpleasant-looking swellings, bulges and growths. The list of potential explanations in these cases is long: tumors, cysts, hernias, abscesses, boils and more. Just like people, deer can be afflicted with all of these. But without the deer to examine up close, diagnosing them accurately is often difficult. So, we aren’t sure what’s going on with this buck sent to us by Derek Schoffstall of Pennsylvania. Derek had been following this buck on camera, and then the huge growth on its side showed up all of a sudden in October 2017. By the end of November, it had burst. Derek then killed the buck in December and the wound was on its way to healing.

But then Derek saw another buck with a similar cyst. And another! In the last two years, Derek said he has seen four different bucks with cysts, but he had never noticed a cyst before that. Is this just coincidence? We don’t know of any disease or other cause of cysts like this that could lead to a local upsurge in frequency, but we’ll be staying in touch with Derek to see what develops. For now, it doesn’t appear these cysts are causing a decline in overall health of these bucks. 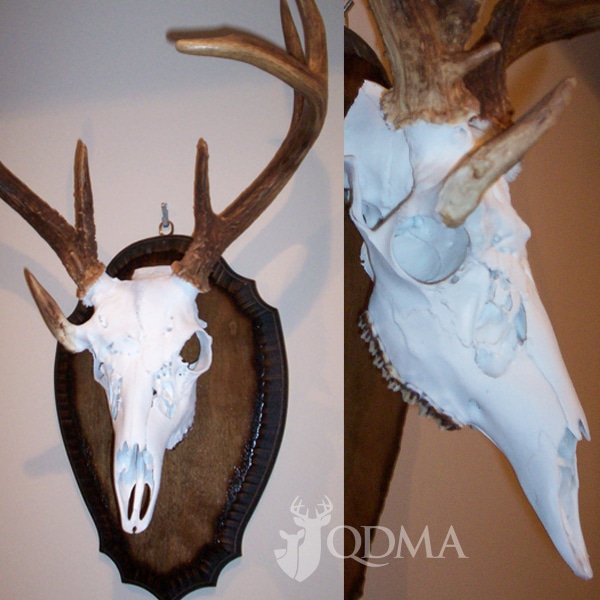 Back in 2012, QDMA member and volunteer Pete von Lehe of South Carolina killed a weird buck with a third antler base originating at the top of its eye socket. It’s rare but not unheard of for accessory or “bonus” antlers to arise from unusual areas of a buck’s skull. In fact, the bone covering most of the top of a buck’s skull from the back to just in front of the eyes has the capability, when properly stimulated, to grow antlers (scientists can even produce antlers on other parts of a deer’s body by grafting this special skull material onto other bones, such as leg bones). Minor skull injuries in bucks are common from fighting other bucks, but in rare circumstances these injuries can stimulate the special cells that produce antler, and a new antler base is the result. We’ve seen these appear between the normal antler pedicles or just in front of them, but this buck’s eye-socket antler is one of the weirdest we’ve ever encountered! 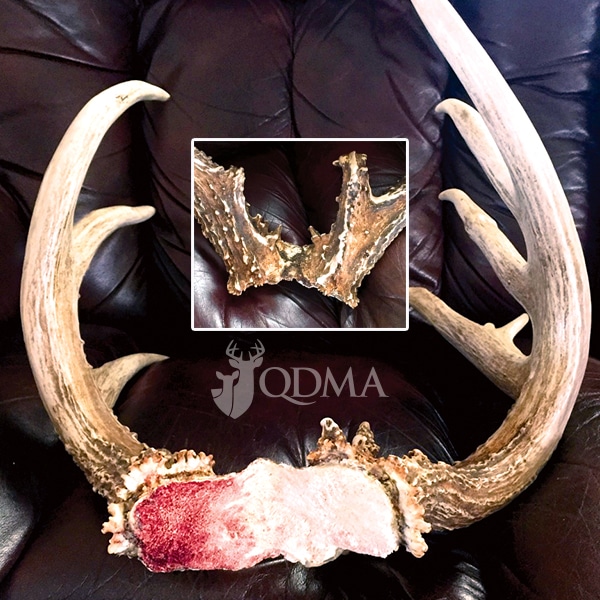 These are the weirdest shed antlers we’ve seen! Jim Bowker and Jay Hartley found this set of sheds in Kansas. The right and left antlers share a single pedicle and were shed together as one unit. David Osborn, deer research coordinator at the UGA Deer Lab, told us he had seen this once before. It was caused when a skull injury between the antlers caused the pedicles to fuse together. This is likely related to the issues that led the Devil Buck’s antler (above). 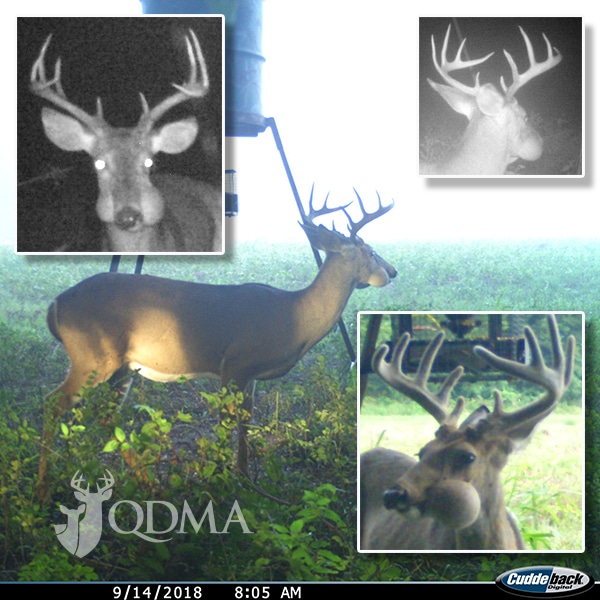 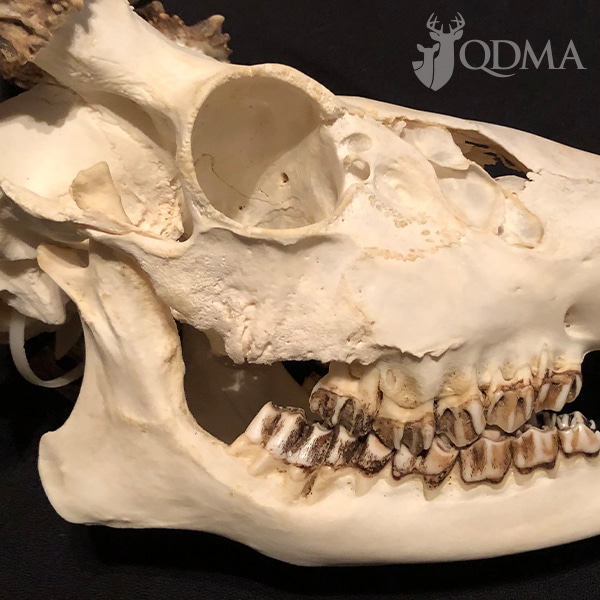 As you might guess, when decaying food accumulates in a deer’s cheek, things can get nasty. The rotting food can lead to bacterial infections. This buck was harvested by a member of Tim’s lease, and evidence on the skull indicates that infection had set in. Enzymes from the infection had severely eroded the bone around the buck’s teeth, on the lower jaw and on the upper skull (see the damage in the photo of the skull above). In fact, the rear upper molar was missing and had apparently fallen out as a result of bone erosion. Once again, this is a testament to the extreme toughness of whitetails, which seem to be able to endure incredible physical challenges. 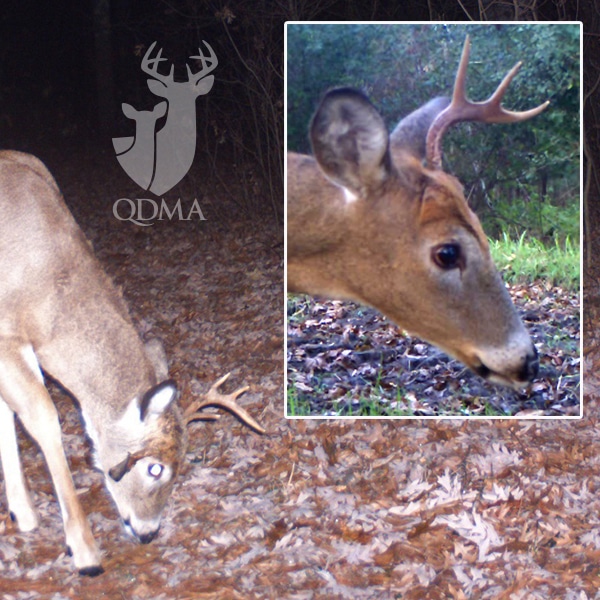 QDMA member Todd Reabe of Wisconsin captured a yearling buck in October 2017 with one odd antler (left, above). It appeared that the buck broke its antler base or even the skull around the pedicle, and the antler was leaning or dangling to the side of its head. This injury may have occurred while the antler was growing, since the dangling antler still had velvet attached in October. The next year, Todd got a brief video of a buck in the same area with no antler at all – not even a visible pedicle or button – on the right side (a screen capture from the video is shown as an inset). Was it the same buck? Todd doesn’t know for sure, and neither do we. If it’s the same buck, the antler on the left side didn’t grow much from one year to the next. But it sure seems to make sense that it’s the same deer. 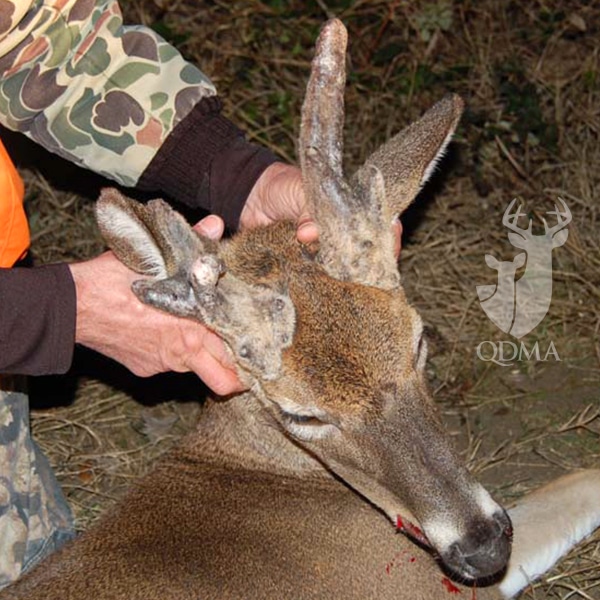 QDMA member Allen Dykes of Georgia killed this strange deer a few years ago and sent us photos. Killed in December, the deer had antlers that were still in velvet – and it appeared to be a doe! It had an udder and teats, but when it was gutted, it did not appear to have the normal internal reproductive tract of a doe. However, it did not have obvious testicles either. Many types of deformities can lead to a condition like this, and Joe Hamilton discusses some of them in a separate article. 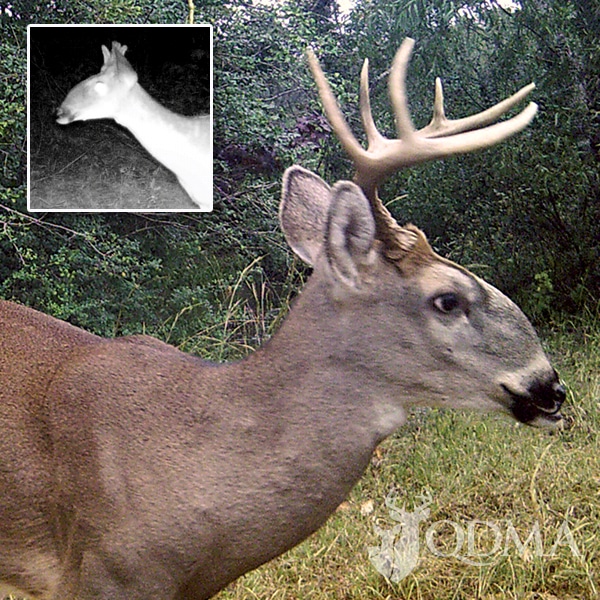 This Arkansas buck has been walking around hunting land belonging to QDMA member Luke Moore for the past two years, and Luke has appropriately named him “Snubnose.” The odd-shaped nose is likely a birth defect, and we’ve seen deer before with either an over- or underbite condition. The defect doesn’t seem to be affecting Snubnose’s ability to eat or thrive. Genetic defects like this crop up sometimes in any deer population, but there’s nothing hunters can do to remove them or prevent them, since we cannot manage genetics in wild deer with harvest decisions.

And while we’ve seen underbites and overbites before, we’ve only seen one deer nose like this one! New York hunter George D. Utley III shot a unique whitetail buck in the Adirondacks last deer season. It wasn’t until George approached the downed buck that he noticed the deer’s crooked nose. George assumed the buck had broken it’s nose, possibly while running off after the shot. After getting the deer dressed and the skull cleaned, it became apparent this was not a break but that the skull had simply grown that way, probably from a birth defect. The jawbone points to the buck having been 3½ years old, so it was obviously surviving just fine despite the unfortunate affliction. 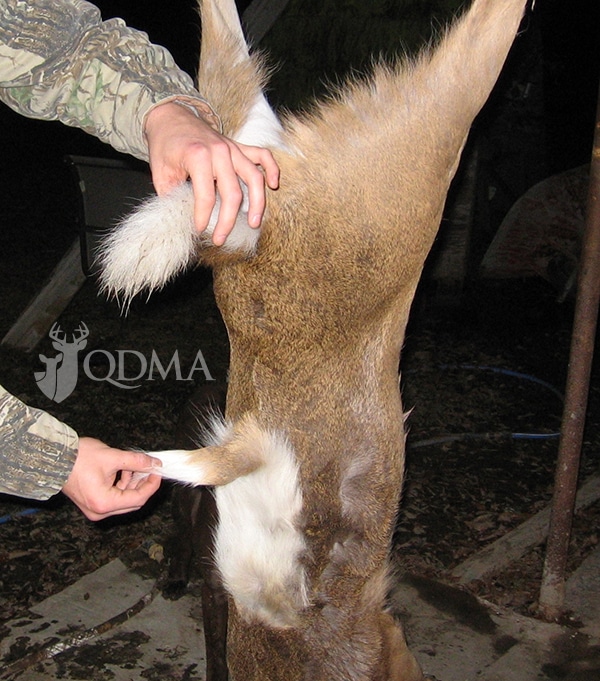 This weird deer was taken several years ago in Louisiana and submitted to us by Cory Callegan. Cory’s uncle killed the deer, and the hunters were surprised to find what appeared to be an extra tail growing out of the middle of the deer’s back. Again, we’ve seen deformities similar to this, like a buck that had a fifth leg growing out of its back. As in that case, the Louisiana deer is probably displaying what’s known as a “parasitic twin.” In the womb, two embryos formed but did not completely separate. From there, one of them stopped developing normally but left remnant cells that tried to become a bonus tail. A very rare genetic defect that again is not a problem on the population level.

This is a good place to share a reminder about sick deer you might encounter out there. If you witness a deer that is alive but clearly behaving weirdly, such as walking in circles, failing to flee from danger, drooling excessively, or otherwise appearing seriously ill, contact your state wildlife agency immediately! If someone from the agency is able to respond, stay in sight of the deer until they arrive. With chronic wasting disease (CWD), it is critical for agencies to discover new outbreaks of the disease as soon as possible before the disease can take root in the local herd. You can help with this effort by being the eyes and ears of your state’s professional deer managers. Thank you!

Got questions about weird deer or anything else deer related? We’ll do our best to help! Use Ask QDMA to contact us. And consider helping us expand our hunter education efforts even further by becoming a supporting member of QDMA today.