White-tailed deer antlers are amazing appendages, aren’t they? Through the centuries, they’ve adorned walls of caves, huts, barns, camps and literally millions of homes across North America. Their mystique fills the minds of countless hunters every year. They’re also commonly used as a reasoning to kill.

Sure, most hunters aim to harvest an antlered deer when heading afield come fall. Too often misshapen or malformed antlers are cited as the reason to “cull” or “remove bad genes” from the herd. However, most of the time odd-shaped antlers are the result of an injury, not genetics, and, if given time, the buck in question may grow a larger, symmetrical rack down the road.

Bucks can injure themselves in a lot of ways throughout their life – let’s face it they are male, they do dumb things, and most hunters are targeting them. We also know that injuries to different places on a buck result in varying degrees of permanence. Three such paths of injury include:

To the antler pedicle, or the general region where the antler originates from the skull. This will almost always be permanent and the injured antler(s) will forever grow in a non-typical fashion

To the soft, growing, velvet-covered antler. This will only affect antler shape and symmetry for the current year. The earlier it happens, the more abnormal the growth.

To the body. This will likely affect antler growth for at least one year. If the wound is severe enough it may lead to permanent damage. But, it may not. The effect can also be delayed. Why or how this happens is poorly understood. We do know that injuries to a rear leg often impact antler growth on the opposite side of a buck’s body, while injuries to the front leg can affect either side

However, none of these causes are genetic in nature; so, removing a buck that has been injured and has abnormal antlers will do absolutely nothing to change the gene flow within your local deer herd; regardless of the fact that science has proven it can’t be done.

Below are three examples of deer that have sustained an injury at some point in their lives, grew abnormal antlers as a result, and subsequently grew a symmetrical rack later on:

A pen-raised research deer at the University of Georgia Deer Lab, Buck 1 injured his soft velvet-covered antlers at 3½ years of age when attempting to avoid a nasal bot-fly, causing him to damage both (antler) sides on a chain-link fence. He grew symmetrical antlers the following year and had a 21-inch inside spread, 10 points and gross scored 145 inches B&C.

Buck 2 was a free-ranging deer from New York state that was wounded by a hunter as a yearling buck, sustaining a gunshot in his right shoulder. The injury helped identify him throughout his life, and led to an abnormal left antler at 2½ (you can also see the wound in the photo below). However, by 3½ he returned to a typical main-frame 10-pointer, eventually being legally harvested as an 11-point, 160-inch gross B&C 4½-year-old.

Another wild New York deer, Buck 3 was injured around his second birthday. He showed typical growth as a hard-antlered yearling but displayed an abnormal right antler and obvious wound to his front left hoof the following year. It’s reported that he favored his right foot most of 2010. His right antler was stunted in growth that summer and held on to velvet much longer than the left side, eventually shedding mid-fall. Buck 3 grew into a 10-point, 154-inch gross B&C buck by 4½, and was unique because he had a double-throat patch – which allowed the hunter that eventually killed him to document his life. 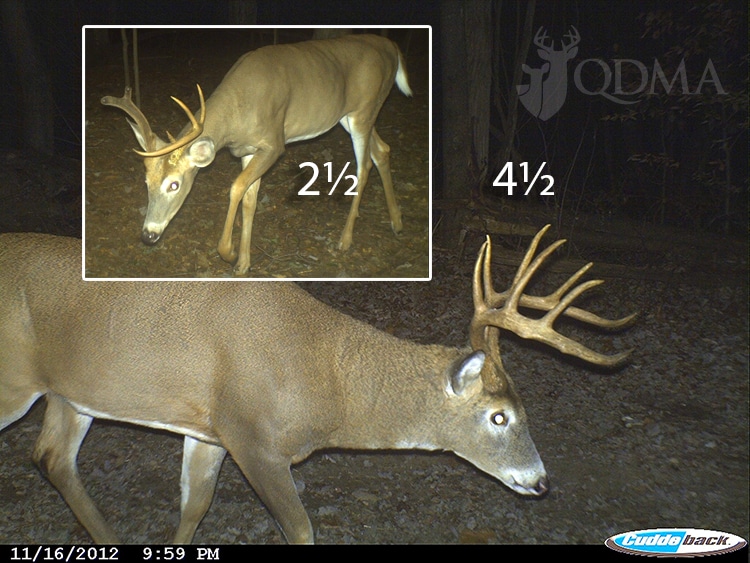 I present these examples to help support what QDMA believes is the ideal harvest criteria for bucks: his age. If your harvest goals are set under this standard and this one alone, you can take and adapt it anywhere you go in life as a deer hunter. Whether you hunt on public or private land. Whether you’re a novice or a veteran. Or, whether a buck’s antlers are symmetrical, or they are not.

I suspect the vast majority of antler deformity causes out there are injury-based. And, we know it amounts to zero change in future antler growing potential of local bucks when you remove one of the few that may be genetically influenced. So, why limit yourself? Set a target harvest age for bucks depending on your experience level in hunting and goals of the individual program. Then, if you see a buck that meets it, kill him – it’s that simple.

Then go hang him on your man-cave wall.