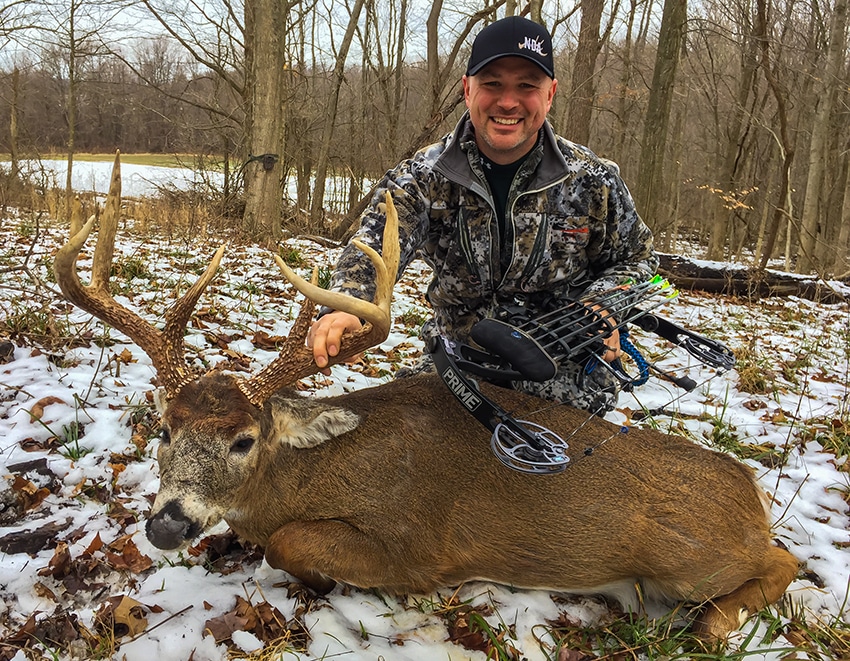 My heart sank as the snow crushed loudly under my boots when I was approaching my stand. The temperature was supposed to rise into the low 40s overnight, and I expected melting snow to soften my entry to the edge of a bedding area I planned to hunt. Instead, I might as well have been walking and eating from a noisy bag of potato chips, which would have caused an equal disturbance. I was already on edge because I knew I wouldn’t get far making mistakes when hunting the end of a long season, and I worried my chance for success was doomed before daylight. Not one to give up easily, I shook it off and continued to my stand, which I had just set 48 hours earlier in a driving snow storm with the hope of getting close to a mature buck I had been targeting for months.

The early archery season and firearms season had come and gone, and despite a few close calls, I couldn’t seem to close the deal on a heavy-racked eight pointer I had a couple years of history with. I watched him get out of his bed one evening while archery hunting during the rut, but he skirted my location probably having watched me enter my stand. That same week I watched helplessly as he had a doe corralled on a field edge, giving me no options to get close. I saw him with a group of does in a field during the firearms season and did my best to stalk to within range, but he retreated to cover upon catching me up to no good at the last moment. Now I faced the prospect of getting close to a buck in January that I knew to be five years old. On top of being naturally weary and experienced, he was now highly educated to my presence.

My three keys to filling a tag during the winter months likely won’t be anything you haven’t heard before. Very simply, 1) find the preferred food source, 2) determine which deer are using it and when, and 3) set ambush locations that keep the wind in your favor. While these tactics may seem like common sense, it’s executing on them that is often the challenge. Knowing what to do is half the battle, but being willing to put in the time after what has likely already been a long season is what often separates those who are able to punch a tag from those who don’t. It’s unlikely the deer you’ve been hunting are following the same routine they were in October or November, so obtaining the most recent information is critical.

I knew based on observations and trail-camera photos that the mature buck I was after was primarily feeding in a cut soybean field to the north and a winter wheat field to the south of an area of bedding cover (see the map below). Normally I’d focus my time this time of year hunting in the evenings, but the buck didn’t seem to be less active in the mornings, likely driven by his need to feed. It was a cold winter, and the buck had clearly lost a lot of weight during the rut. Starting around mid-December he became very willing to move during daylight hours, so I felt confident I’d at least lay eyes on him again.

I watched the weather closely and saw that, after a harsh cold spell when temperatures didn’t get above freezing, there was a warmup expected that would make hunting conditions more comfortable. Despite being tired and mentally drained, I forced myself to set two stands in freezing weather with one being focused on the soybean field and the other along a ribbon of cover that led to the winter wheat field. My plan was to check the wind direction when I arrived at the farm and then hunt the appropriate stand. Since the wind was east-southeast, I opted for the stand between the two fields.

In addition to the few deer I inadvertently chased off on my way in, I saw several deer during the first hour of the hunt including two immature bucks sparring to the east of my location. After about another hour, there was a lull in the action, and I was starting to think the hunt was done when I spotted a couple deer more than 100 yards away coming through a neighbor’s field. I thought I could see antlers, and when I lifted my binoculars it was immediately confirmed. Not only was it a buck, but it was the mature 8-point, and he was headed in my direction following a young doe. I felt confident he was headed to the cover behind me, and with every step he took in my direction the discomfort of numb fingers and toes slipped further from my mind. I tried to control my breathing and focused on how I would execute the shot if given the opportunity.

When the young doe followed the trail right through my preferred shooting lane, I knew the old buck would follow, so I drew my bow well in advance of his arrival. When he entered the opening, I released the arrow and watched as it buried into his ribcage, causing him to bolt down the hill like a freight train. Even though he ran out of sight, I could see a clear blood trail in the snow from my stand, and I was confident the search was going to be an easy one. After waiting about an hour for some help to arrive, I slowly followed the trail, and it wasn’t long before I had my hands around the buck’s massive rack. It was a tough journey to that moment filled with highs and lows, but by following the three basic keys to successful winter deer hunting I was able to put my tag on a great buck in mid-January.

Through putting in a few extra hours of scouting time, I was able to identify the buck’s preferred food sources and bedding area. With the help of a few trail cameras, I learned the deer was just as willing to move during the morning hours as he was during the evening, meaning I didn’t have to only focus on evening hunts. Finally, being willing to hang a couple stands in lousy weather when I really didn’t feel like doing it, I gave myself two viable options to hunt the deer when the weather was right. Knowing what to do was one thing, but being willing to do it is what led to finally catching up to a deer that I was beginning to think had my number.

Some of the best hunts I ever had happened in the winter months when most people had already given up. I’ve seen several mature bucks moving during daylight hours during this time, and I’ve also filled a few doe tags along the way. If you can find the right food source, which can be anything from agricultural fields to leftover acorns and even browse, you’ll likely find deer to be more patternable during the winter than any other time of year. If you still have a tag in your pocket, I encourage you to find the food source, hang a few trail cameras, get the wind in your face, and don’t give up until the season ends. After all, your next opportunity won’t come until the next season begins, which is anywhere from eight to 10 months from now depending on where you hunt.