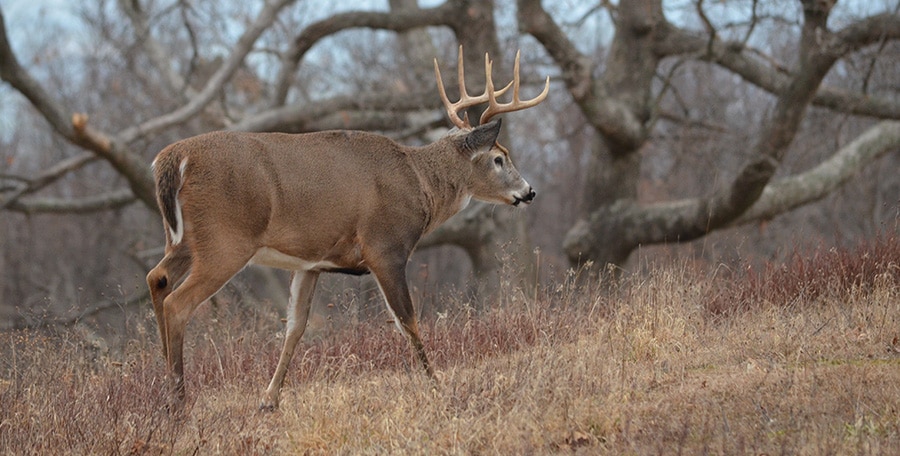 Do you believe the list of attributes a buck must possess to be a successful breeder is long or short? Does it change depending on where you are in the whitetail’s range? Much research has gone into this topic, and we now have some definitive answers on what leads to specific bucks winning the right to breed.

A word of caution before you continue: Throw the old wives’ tales from deer camp out the window right now.

Johnny on the Spot

Research has shown there are three main attributes leading to successful breeding.

The first is for a buck to simply be in the vicinity of an estrous doe. Deer managers used to believe large mature bucks dominated the breeding in deer herds similar to the way bull elk do. The idea was that the largest individuals successfully defended all estrous does from other would-be suitors. This idea seemed plausible, and it wasn’t until the advent of genetic testing that paternity assessments could be done. Research during the past several years has revealed a much different picture of what actually happens in the whitetail’s breeding world.

White-tailed deer have a different breeding ecology than elk. Elk form harems of cows that are guarded and bred by a single bull. The identity of the specific bull may change during the breeding season, but the individual bull in charge at the time when cows are receptive gets to breed the entire harem. This strategy allows a small number of bulls to breed a large number of cows.

Whitetails don’t form harems. Instead, bucks search for individual receptive does. It is not uncommon for a buck to court a doe for up to a day prior to her being receptive and then breed her repeatedly during the 24 to 36 hours she is in estrous. The buck then searches for another doe and repeats the process. Therefore, bucks that successfully breed may spend as much as 24 to 48 hours with a single doe before looking for another. Due to the time spent with an individual doe, and because the majority of does are bred over a relatively short time frame, this strategy doesn’t allow an individual buck to monopolize the breeding.

Dr. Randy DeYoung’s research at the Noble Foundation in south-central Oklahoma documented that breeding is done by bucks of all age classes, irrespective of the herd’s age structure. Yearling and 2½-year-old bucks sired a third of the fawns in his study, even though about a third of the bucks in the population were 3½ years of age or older. Randy’s research also showed bucks that successfully breed do not sire many fawns. The most prolific buck in his studies only sired six fawns in a single year, while nearly 70 percent of bucks only sired a single fawn annually.

Hence, many bucks – young and old, small and large – get to breed simply because they are in the right place at the right time. They don’t have to be the biggest, baddest buck in the woods. They simply need to be the one with the doe when she is in estrous.

Dominant bucks don’t monopolize the breeding, and they don’t even sire all of the fawns from each doe they breed. Black bear biologists have known for years that a litter of cubs could easily have more than one father, but “multiple paternity” in whitetails is relatively new information. Randy and his colleagues were the first to report on this. Their study of captive deer revealed multiple paternity occurred in about 24 percent of compound litters. Approximately one in four sets of twins or triplets had two fathers! This means does are breeding with multiple bucks, which further emphasizes that individual whitetail bucks do not monopolize breeding.

Anna Bess Sorin then documented the first cases of multiple paternity in free-ranging whitetails in Michigan. She reported multiple paternity in 22 percent of twins, a percentage similar to Randy’s findings. She also noted bucks that jointly sired twins appeared to be at least one year apart in age. There are several explanations for the joint siring. Remember, bucks will repeatedly breed does during the 24 to 36 hours they are in estrous. It is plausible in cases of multiple paternity that a buck breeds a receptive doe and then gets displaced or run off by a larger, older or more aggressive buck while the doe is still receptive. The larger/older/more aggressive buck then breeds the doe, and the doe can have fawns sired by each of the bucks. The initial breeder may have been a young buck who was in the right place at the right time before getting displaced by an older buck, or he may have been the most dominant buck in the area but was “run down” from prior breeding activity and was displaced by a more aggressive animal. It is also possible for the doe to breed with other bucks. Behavioral observations combined with genetic studies clearly show all breeding sequences do not result in conception.

Hence, many bucks – young and old, small and large – get to breed simply because they are in the right place at the right time. They don’t have to be the biggest, baddest buck in the woods. They simply need to be the one with the doe when she is in estrous.

Estrous does don’t stay lonely for long so the next most important attribute is body size. Chad Newbolt and his colleagues at Auburn University measured physical characteristics and collected genetic samples from 262 different bucks from 2007 to 2014 at Auburn’s deer research facility. Then they assigned paternity to 143 known-age bucks. Their research showed there was not a significant relationship between the number of fawns sired and buck age or antler size. Rather, they found body size was most important. Regardless of age or antler size, larger-bodied bucks won the right to breed most often.

Antler size has to count for something, right? Yes it does, and Daniel Morina and his colleagues at Mississippi State University conducted one of the coolest research projects I’ve seen at the University’s deer research facility. They manipulated antler size on bucks while controlling for body size and age by designing a system to be able to switch antlers on bucks. They tested each buck’s ability to attract estrous does while wearing small and large sets of antlers. This was super cool! Their research showed when body size and age were comparable, and competition between the bucks was controlled (they were in separate fenced areas with a doe in between them), does preferentially chose bucks with larger antlers.

The necessary attributes for a white-tailed buck to win breeding rights is pretty short. That’s why culling programs to increase antler size fail in free-ranging situations. It’s also a good safeguard against mismanagement on our part, and it’s nice to know that large, mature bucks do the majority of breeding. However, we all root for the underdog, so it’s nice to know the little guys get in on the action, too.

Good luck in the woods this fall!