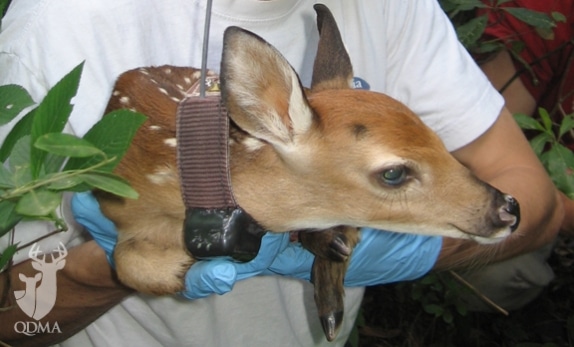 Each year, QDMA attends the meeting of the Southeast Deer Study Group, a subcommittee of The Wildlife Society (an association of professional wildlife biologists), that has been gathering for 35 years to share and discuss the latest results of their ongoing deer research. Even though it’s named “Southeast,” speakers and researchers from all over North America contribute. We’ve compiled some of the most interesting findings overheard at the four most recent meetings, 2011 to 2014, and they included the following statistical snapshots:

907 Acres – Average fall home range size of mature bucks in a University of Georgia GPS-collar study in unfragmented hardwood forest in northern Pennsylvania. The average core area size, or the area where a buck spends at least half of its time, was only 142 acres.

4½ – Average age at which whitetail skeletal dimensions reach their lifetime maximum. Tim Neuman at Auburn University was taking the measurements to see if breeding success among deer is related to age or body size. He didn’t find evidence that either factor is related to successful fawn production. 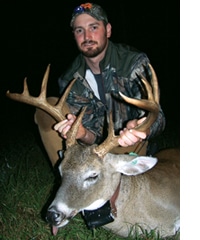 55 Yards – Increase in the average distance adult bucks traveled away from hunting stand sites from the beginning of hunting season until the end. Auburn University researcher Clint McCoy (shown with one of his captured research bucks) based this finding on GPS location data from 37 bucks across three hunting seasons in South Carolina.

11 Days – Longest duration of a spring-time excursion by bucks in GPS-collar studies in Georgia, Louisiana and Pennsylvania (an “excursion” is when a deer temporarily leaves its home range). Nearly half of all bucks in these University of Georgia studies made at least one spring excursion, with trip distances ranging from 1 to 8 miles. So far, researchers do not have a reliable explanation for why bucks make spring excursions.

1% – Portion of Maryland deer hunters who claimed in a survey to have stopped deer hunting since CWD was discovered in Maryland in 2011. However, researchers with the University of Delaware and Maryland DNR checked the harvest registry and found that 47 percent of these same hunters continued to harvest and register deer anyway. 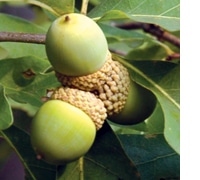 $180 per acre  – Annual amount spent fertilizing white oak trees based on soil-test results to see if acorn production could be increased, in a University of Tennessee study that has been ongoing since 2006. The answer? So far, no benefit has been found compared to non-fertilized trees at study sites. However, selectively thinning white oak stands has been found to work, and it has the secondary benefit of increasing understory forage and cover for deer.

84% – The percentage of the total population of coyotes identified by DNA markers from thousands of scats collected in Virginia that only appeared once in the collection. Dana Morin of Virginia Polytechnic and State University said this supports other evidence that coyote populations in Virginia include a high percentage of widely traveling individuals and experience high turnover rates – both of which suggest that shooting coyotes does little to control populations.

14% – Increase in bait consumption by deer inside four, 100-acre, coyote-free exclosures compared to outside the exclosures (fences are low enough for deer to come and go freely but not coyotes). This, combined with analysis of “vigilance” in trail-camera photos, demonstrated that the mere presence of coyotes affects the amount of time deer must be on alert, reducing time for foraging and thus deer nutritional health, according to Mike Cherry of the University of Georgia.

$115,000 – The estimated cost to produce a 1-inch increase in average Boone & Crockett score among a localized population of free-ranging bucks by releasing pen-raised deer to improve genetics. Dr. Steve Demarais of Mississippi State University conducted the computer-model study (using existing data on natural dispersal and immigration, breeding success, recruitment, and survival, plus the costs of buying pen-raised deer) in response to recent suggestions by deer breeders that this practice would be beneficial. Most biologists laughed at the idea, but they had little data to stand on. Now they do. 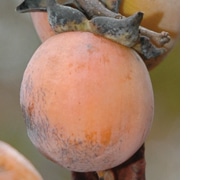 Cotton Rats & Persimmons – The two most common food items found in 353 coyote scats collected on two public hunting areas in Georgia. Despite the diversity of food items found, scats indicated that coyotes on one of the WMAs switched almost exclusively to eating fawns during the fawning season (study conducted by the University of Georgia and Georgia DNR).

12 Hours  – The duration of a rendezvous between a buck and doe that were both wearing GPS collars and being tracked by University of Tennessee researcher Seth Basinger on the 39,000-acre Arnold Air Force Base. Interestingly, both deer were on excursions outside their normal home ranges when they hooked up, and they returned to their respective home ranges afterward.

1 to 10 p.m. – Peak hours for fawn births to occur among 147 pregnant does studied by Dr. John Kilgo and others with the USDA Forest Service Southern Research Station. Though fawns were born around the clock, 63% of births were concentrated in only 37% of an average day: afternoon and early evening.

7.8 to 9.4 – Increase in average crude protein levels in natural forage species from 2011, a drought year, to the following year when rainfall was normal. University of Georgia researcher Levi Horrell found, at one site, that protein in American beautyberry jumped from 9 to 14% corresponding to increased rainfall. This illustrates how drought can reduce carrying capacity and deer health factors, like fawn recruitment and antler growth.

The Justin Beiber Theory – Auburn University researcher Pete Acker’s theory explaining his finding that a small percentage of bucks under 1 year of age (button bucks) successfully fathered fawns each year in a six-year study. Conducted in Auburn’s 430-acre high-fence research facility, the study found breeding success distributed across bucks of many ages, even as the buck age structure changed to represent more older bucks in the population.

6.75 – The number of hours per day a healthy buck can switch over from foraging to finding does during the rut, if he enters the rut in good condition. “Good condition” can mean 25% body fat, which is 44 pounds of fat on a 175-lb. buck. Dr. Dave Hewitt of Texas A&M-Kingsville predicts bucks that acquire large fat reserves before the rut are more likely to breed successfully because they can afford to spend more time getting the job done. 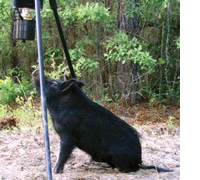 80% – Increase in deer detection rates at trail-camera bait sites after feral hogs were trapped and lethally removed from the surrounding area, in a study by Chad Newbolt of Auburn University that took place on Fort Benning, Georgia. The study results strongly suggest that deer actively avoid hogs, so hogs can essentially exclude deer from food sources with their presence.

June 22 to April 18 – Range from the earliest date a doe was bred by a buck (June 22) to the latest date (April 18) in a study of more than 300 hunter-harvested does examined by the Florida Fish & Wildlife Commission. The rut peak varies from July in south Florida to late February in northwest Florida, which is likely the widest variation in the timing of the rut peak found in a single state.

18 Inches – Average difference in gross antler score between bucks given supplemental pelleted feed compared to those eating only natural forage (all of them were in 200-acre high-fenced research enclosures). Dawson Lilly of Texas A&M-Kingsville said antler size dropped for all bucks in drought years, even those on pelleted feed, because natural forage is always important and cannot be replaced by supplemental feed.

93% – Proportion of Mexico inhabited by whitetails, according to the Caesar Kleberg Wildlife Research Institute at Texas A&M-Kingsville. Their range extends from the U.S. border to the tropical jungles of Central America and includes 14 recognized sub-species. Some of the smaller, native sub-species may be disappearing, replaced by another sub-species – the Texas whitetail – being imported from the north by ranchers. 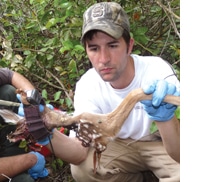 4 – Number of pregnant does out of 28 (14 percent) being tracked by North Carolina State researchers that were found dead at the site where tracking devices indicated they were giving birth. Evidence suggested all four were killed by coyotes, which may have taken advantage of the does’ vulnerable state during birth, killing both the mother and fawn. The study took place at Fort Bragg Military Installation and also found that 55 percent of collared fawns were killed by coyotes or bobcats.

50% – Average change in buck neck circumference during the rut. The University of Delaware found this while studying more effective designs for expandable collars used in tracking deer for research purposes.

20x – Number of times deer vision is more sensitive to blue wavelengths of light than human vision, based on University of Georgia research.

98 to 128 – Range of average adult doe body weights (live) in Mississippi from the sandy soils of the Lower Coastal Plain (smallest weight) to the “Delta” region, known for the most fertile soils in the state (study by Mississippi State University).

30% – Proportion of 487 antler sheds studied by Auburn University that were broken in some way. The main beam and G-2 were the least likely to break among antlers in the collection. 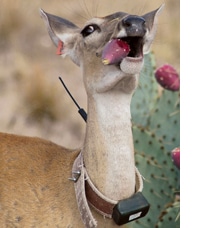 24% – Reported decrease in hunting-lease values in Texas as a result of problems associated with feral hogs. Reported by: Dr. Billy Higginbotham of Texas AgriLife Extension.

80% – Increase in fawn survival from 2009 to 2010 in an Auburn University study; 2010 was the first year trapping of predators was extended throughout the fawning season at the study site.

3 – Number of unique bucks responsible for siring a set of triplet fawns born at Auburn University’s Deer Lab, a 430-acre research enclosure in Alabama (each fawn in the set had a different father). “Multiple paternity” has been reported numerous times in twins, and two unique sires were reported for a set of triplets, but this is the first report of three sires for a set of triplets, according to Stephanie Irvin. 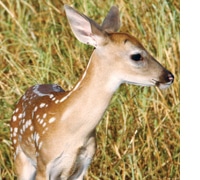 69% – Proportion of 23 “multiple paternity” cases in a Texas A&M-Kingsville study that involved at least one sire 2½ years or younger. Since mature bucks were present in the age structure, Aaron Foley suggested that young bucks were able to breed by sneaking an opportunity with an estrous doe just before or just after a mature buck was on the scene.

43 yards – Average distance on the ground between the satellite-reported location of GPS tracking collars and the actual, known locations of the collars, in a study testing GPS collar accuracy.  Accuracy varied for certain conditions but, overall, was adequate for measuring home-range size and shape. Reported by: Blair Smyth, University of Arkansas at Monticello.

$500,000 – The amount of funding QDMA directed to support deer research projects with the potential to produce useful information for deer hunters, from 2006 to 2013. You can help us do even more to support practical deer research by becoming a QDMA member today. Thank you for your support!