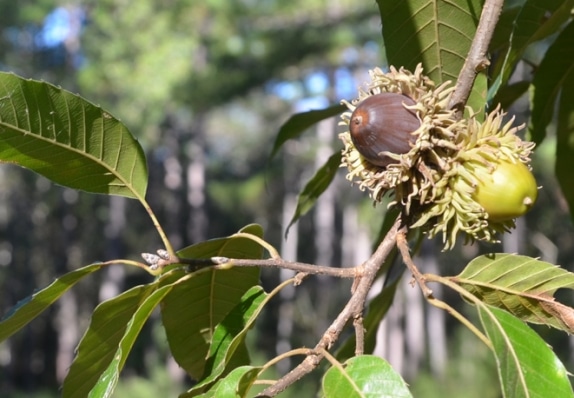 Sawtooth oak is a native of Asia that was introduced to North America in the 1920s. It was little known to hunters until the 1960s and 70s, when wildlife researchers began reporting the results of their use of the tree as a wildlife planting in the Southeast. Wildlife professionals began to talk to landowners and land managers about the tree’s features – fast growth, early acorn production, consistent and abundant crops, and high preference by deer. Nurseries began to produce seedlings, and hunters began planting them. My Dad was among them. Each winter starting about 1980 he ordered bags full of tree seedlings and presented them to my brother Rans and me, along with post-hole diggers, plastic tree tubes, and other tools we needed. Not even teenagers yet, Rans and I dreaded seeing those bags of seedlings show up, and as we trudged off to do the work, we grumbled about how those dinky seedlings were never going to do any good for deer. We no longer grumble as we climb into stands with our bows each season to hunt the travel patterns that center on those trees we planted (Of course, after we grew up and left home, Dad bought a PTO-driven auger to replace the post-hole diggers!).

True to what we heard, the sawtooths grew fast, started producing acorns at an early age, and consistently produce amazing acorn crops. But we also learned other traits that weren’t advertised.

The acorns fall early (mid-September) and they fall fast. Hunting opportunity around sawtooth oaks includes a few early days of archery season, and the nutritional output is very “vertical” – tall in quantity, narrow in time. Our sawtooths also appear to conform to a pattern displayed by many plants and animals: faster growth equals shorter lifespan. Our oldest sawtooths maxed out at a height of about 40 feet at 20 years of age, and now, approaching 30 years, a few are already showing signs of dying back.

There is even a growing murmur about sawtooths reproducing and “escaping.” The sawtooths in our woods aren’t escaping fast because deer are waiting on each acorn to fall, but other trees were planted in the yard of the farmhouse, and seedlings can now be found throughout the yard (the photo in the Gallery below is of a seedling my son Jake pulled out of the ground in the farmhouse yard).

Luckily, the trees we planted over the years were not all sawtooths. The rest were natives like swamp chestnut oak, white oak, live oak, nuttall oak, crabapples and persimmons. We planted them in full sunlight and we controlled competition annually, which allowed all species to exceed expectations by producing mast early. Because of this diversity in mast species, combined with diverse food plots and diverse habitat, the short nutritional output of the sawtooths is of no concern. Something else is filling in the rest of the calendar with quality deer food.

But, because of the hype surrounding sawtooths, some other hunters I know planted only sawtooths, believing them to be the ultimate tree for deer. They also are discovering the limitations of this species. We didn’t know any better than they did. We just happen to admire a variety of tree species and wanted to include many of them on our land.

So, what are the QDM lessons I learned?

If it sounds too good to be true. Never invest too heavily in one aspect of QDM to the detriment of others, or one technique or plant species, especially if it is reported to have nothing but fantastic benefits.

Be careful with non-natives. Some non-natives bring benefits, as sawtooth oaks certainly do, but most of them also carry risks. There are many good native trees and shrubs that deserve consideration first.

Diversity is the key. You can sum up the Habitat Cornerstone of QDM with the word “diversity.” Sawtooth oaks can’t do it all. Ladino clover can’t do it all. Native warm-season grasses… timber management… sanctuaries… prescribed fire  – none of these alone can produce QDM success. In a diverse QDM program, strengths and weaknesses of plant species or management techniques overlap across time, filling in the holes.

QDM success takes time. As I wore out a set of post-hole diggers, I doubted I would see any return for my sweat, but as years pass the payback grows. This is true of most aspects of QDM, whether you are building buck age structure or building neighborhood cooperation. Stop grumbling and keep planting!