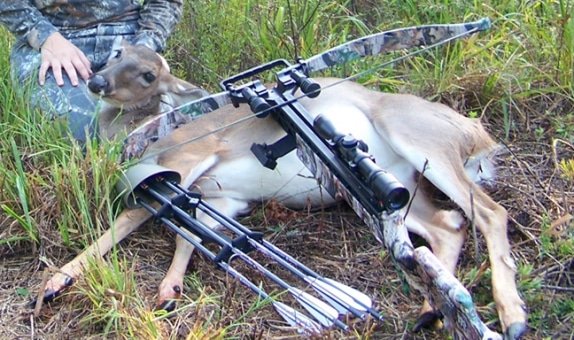 When the density of deer where you hunt exceeds the ability of the habitat to support those deer in healthy condition, it’s time to take an appropriate number of does to bring balance (and balance is reached faster if you increase habitat quality at the same time). Lots of questions usually follow this statement, and one of the most common is: Do I shoot does early or late in the season?

For several reasons, the QDMA’s answer is: shoot them as early in the season as possible. When there is a doe-harvest goal to be met, don’t delay. Use any opportunity to kill does early, including archery and muzzleloader seasons. Here are five good reasons why.

Early in the season, all deer, including does, are feeling less pressure than after big crowds have hit the woods for opening day of gun season and the rut. By late season, does may be as wary as bucks, and just when you are ready to start shooting them, you don’t see any.

Early in the season, hunter enthusiasm and attendance is high. As the season fades, fewer hunters show up. If you put off doe harvest until after the rut, you’ll have less help to get the job done. Also, early in the season there’s no looming deadline to influence judgement when it comes to trigger-control. If  you’re hurrying to meet your doe-harvest goal before the season ends, you’re more likely to mistake button bucks for does.

Taking does before the rut arrives will change the buck:doe ratio and can help intensify rut competition that same year because there are closer to equal numbers of does and bucks. This means bucks have to be more active to compete for breeding opportunities, so they are more visible, and rut behaviors like chasing and fighting are more common.

An adult doe requires about 2% of its body weight in forage every day, or 2 pounds of forage (dry weight) for a 100-lb. doe. The sooner you achieve your doe-harvest goal each season, the sooner you move the scale toward balance between deer numbers and available food.

What About Spooking Bucks?

The number one reason that many hunters delay harvesting does is because we fear that if we shoot a doe with our bow or gun, the imaginary buck that might be following will vanish. Many hunters can tell stories of seeing or harvesting mature bucks while a doe is already down near their stand, but the more important consideration is the long-term effect on your buck-harvest opportunities. Over the long haul, balancing the population with the habitat will increase resources for the young bucks that you pass, including food and cover, allowing them to better express their body and antler potential. Also, balancing the sex ratio will intensify breeding competition, making these healthier bucks more visible during the rut. These long-term benefits far outweigh any short-term disadvantage like spooking bucks, even if it really happens.

Consider the case of a group of hunters I know in Greene County, Georgia. They had been successful at bringing the population closer into balance with local resources on their 1,600-acre hunting lease. Deer body weights increased as a result, and efforts at passing up young bucks resulted in more bucks being sighted from deer stands. However, because reproductive rates and fawn survival were increasing along with herd health, doe harvest was still important.

One season, the hunters decided as a group to delay doe harvest until after Thanksgiving to avoid spooking bucks before the rut. December came around, hunting enthusiasm cooled along with the rut, and folks were busy with holiday functions. Soon the end of the season on New Year’s Day was looming, and the club was far short of meeting their doe-harvest goal. The members scrambled at the last minute to organize a hurried doe-hunting effort, but after nearly four months of archery and gun-hunting activity on the club, even the does were difficult targets. Worse, in the last-minute rush to kill does, the hunters mistakenly shot four button bucks and a spike!

When hunting season ended, a winter trail-camera survey produced an estimated adult sex ratio of four does for every buck. The decision to delay the doe harvest was a costly one: much of the progress of previous seasons was erased, and the club had to work hard in following season to get caught up again.

So, even if the gunshot that drops a doe also spooks a theoretical buck that you might have killed, don’t worry. Meeting your doe-harvest goal early each year will result in better hunting for bucks down the road.

Now, on to another common question about doe harvest: How many does should I shoot?