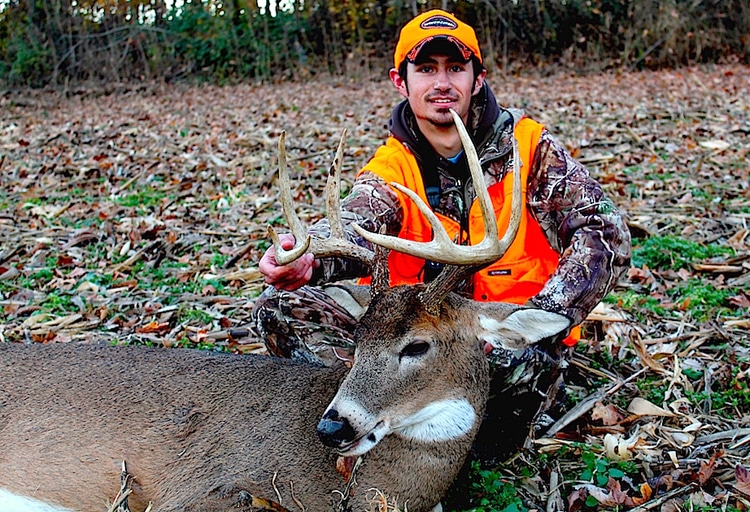 Most of the places I hunt are either public land or small, heavily pressured pockets of private land. Mature bucks (3½ to 4½ years old and older) aren’t making many daylight appearances in these areas — even during the rut. And when they do, it’s generally not going to be in the middle of a wide-open field. To consistently find and kill mature bucks in these situations, you have to think unconventionally. Here are five outside-the-box approaches.

Public lands and heavily hunted private property get hit hard, even during the rut. Because of this, I typically avoid traditional rut stand locations (especially those identifiable via aerial maps) from Friday to Monday. In many cases, other hunters will hit those areas on weekends. Also, give those spots a day or two to rest after the weekend swarm.

If the area isn’t too pressured, I choose to hunt what I refer to as “typical rut stands” from Tuesday to Thursday. They aren’t as apt to get hunted during the week, and deer have had time to relax a bit after the weekend rush. These locations include (but aren’t limited to) pinch-points, saddles, ditch crossings, creek crossings, etc.

Deer seem to gravitate to marshes and swamps. For one, few hunters are willing to trek into the depths of the watery abyss. Secondly, even fewer hunters know how to effectively pursue deer in such terrain. Just getting into position can prove difficult.

There are several key methods for hunting in these locations. However, the best way is to target high points and dry spots out in these wetlands. You’ll often find strategically-placed beds in these spots. Bucks — especially mature ones — tend to position themselves within these near-impenetrable fortresses of water. Hang a stand on or close to these islands of dryness that have beds and wait for the deer to slip up.

I believe that “CRP” is one of the best things that ever happened to whitetails. Deer rely on and thrive in this type of early successional growth. It’s amazing bedding cover for deer.

If it’s available, deer will spend the majority of daylight hours out in it, even unpressured deer. Because of this, it can be very difficult to bowhunt in places with vast amounts of early successional cover. But don’t worry, there are tactical moves you can make to score in these seas of grass.

First, locate all of the drainages and ditches you can by using aerial and topo maps. Deer will bed down in this areas, making them great places to set up. Also, scan the area for isolated pockets of trees and brush. Deer gravitate to these areas. Another thing to look for are fencerows or any terrain features that funnel deer movement in big CRP fields. Deer use these as highways. Lastly, find any water sources located within these areas, as deer will surely use them due to added comfort and security.

Big sanctuaries are ideal for killing mature deer. Big bucks will seek out the thickest, nastiest, most impenetrable cover they can find. This makes really thick areas sanctuaries to deer. They love the security provided by the brush and brambles.

Recent studies show that few hunters are willing to walk more than 1/3 of a mile from their truck to the treestand. Furthermore, these studies show that hunters even greatly overestimate how far they’ve walked. Because of this, if you’re willing to hike in at least half a mile (880 yards) to these sanctuaries, you’re basically hunting unpressured deer with virtually zero competition.

Deer — especially mature bucks — tend to have patterned deer hunters by the time the rut rolls around. They may learn that most hunters don’t hunt from 10 a.m. to 2 p.m.

Hunting on the downwind sides of doe bedding areas is a great way to capitalize on these deer. Hunt these spots all day if you wish, but definitely hunt them during the middle hours of the day. That’s when the big boys will be most likely to stroll through in search of an estrus doe.

Josh Honeycutt is an avid deer hunter. He's hunted deer from South Carolina to South Dakota but spends most of his time hunting in Kentucky. Honeycutt is the associate editor and deer hunting editor for Realtree.com, and his work has appeared in more than 50 publications including North American Whitetail, Whitetail Journal, Field & Stream, Outdoor Life, Game & Fish, Fur-Fish-Game, Modern Pioneer and more.