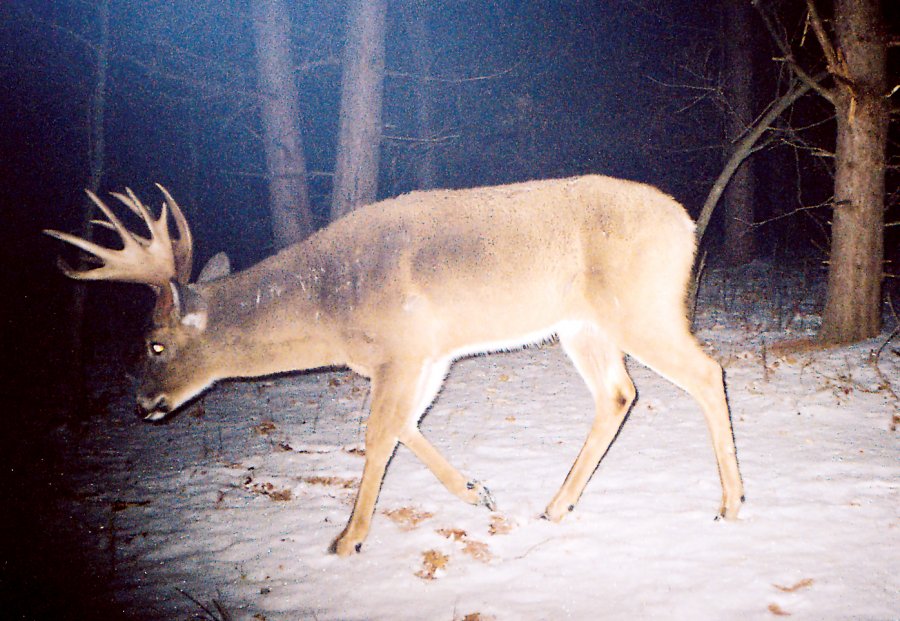 A number of trail-camera images in QDMA’s book, Deer Cameras: The Science of Scouting, belong to Todd Reabe of Brillion, Wisconsin. Todd is a QDMA member who, over many years, has shared numerous trail-camera photos with QDMA. His collection is noteworthy because it includes a noticeably high number of mature bucks on trails or using scrapes, many of them photographed in broad daylight.

Todd’s family farm is 156 acres and part of a 5,000-acre QDM Cooperative involving more than 30 properties. The Cooperative’s success at protecting young bucks is part of the reason for Todd’s ability to photograph mature bucks – there are simply more mature bucks available (like the palmated buck Todd photographed, shown above). However, the Cooperative is located near the chronic wasting disease (CWD) eradication zone in Wisconsin, and baiting has been banned in that region for a number of years. Because he cannot use bait to create camera sites, Todd had to learn different techniques for scouting mature buck activity using a trail-camera.

Todd follows basic guidelines for good lighting and quality images that are described throughout QDMA’s book. Here are his other tips and techniques for capturing mature bucks, especially in daylight:

1. Trails in thick funnels or bottlenecks between bedding areas and food sources are Todd’s best bet for mature bucks. He especially loves to find trails  like this leading to soybean fields in late summer.

2. Todd says some trails produce lots of does, young bucks and other wildlife, but few mature bucks. Meanwhile, other trails produce fewer photos overall, but more mature bucks. These trails are almost always the ones with heavier cover, but there are exceptions to this rule. Spending time monitoring different trails is the only way to find the most productive sites.

3. Todd has found that scrapes on the edges of fields and open areas most often produce yearling-buck photos. He focuses on scrape sites located in or near thick cover and densely vegetated travel corridors. These more often produce mature buck photos.

4. On good trails for mature bucks, Todd has noted that photos come in waves, with quiet weeks followed by weeks with lots of photos, and vice versa. In most cases, the cause seems to be shifting availability of food sources.

5. In all cases, Todd practices extreme scent-control techniques to minimize disturbance around his camera sites.