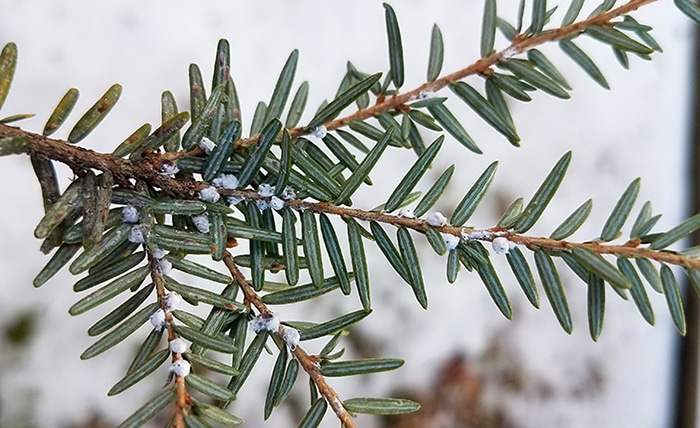 In its Northeast and Appalachian Mountain range, eastern hemlock (Tsuga canadensis) offers fairly preferable winter browse, becoming a more important part of deer diets when most hardwoods have lost their leaves and broadleaf forbs are not available. In the northern climate, where overwintering areas are a critical part of whitetail habitat, few tree species compare closely with eastern hemlock in its ability to hold a snow load, which helps create covered bedding shelter in winter. Found around lowland swamps and on dry upland sites, occurring both in pure stands and mixed in with northern hardwood forests, hemlock trees are so pervasive a member of our eastern woodlands that it becomes easy to take them for granted.

But a threat is looming. For more than half a century, the hemlock woolly adelgid (HWA) has been crawling its way through the Appalachian Mountains and beyond. This tiny insect sucks the sap from hemlock twigs, causing crown dieback and eventually death. Today, this invasive pest covers about half of the range of eastern hemlock from Georgia to New England, and it isn’t stopping. It’s ability to clone itself thousands of times results in the decimation of large stands of hemlock.

There are a number of control measures that are being used or tested. Natural predators (other insects) have been imported and are currently being cultivated for release. The hope is that these insects will fill the role they did within their natural range and potentially keep HWA populations below damaging levels. There are also “systemic” insecticides available for individual infested hemlock trees. These essentially make the tree poisonous to the insect. These treatments can be expensive, and they may only prove effective for a few years.

There are, however, five simple things you can do:

If you have hemlock, continually check on the known distribution of this pest to be prepared when it is near. Know how to identify HWA, looking for clumps of white, wooly wax on the underside of the needles in fall, winter, or spring. In summer, the tiny black insect is small — less than a millimeter — but visible. If you see it, report it to someone from your state’s wildlife or forestry agency. The affected hemlock branch in the photo accompanying this article was found, unfortunately, on my father’s property.

Removing isolated hemlock trees that have become infested can help to prevent HWA from spreading once it’s identified.

The U.S. Forest Service suggests keeping bird feeders away from hemlocks may help to prevent HWA from being carried to new sites. If you have hemlocks in your backyard, don’t place bird feeders close to the hemlocks.

Take note of where you have hemlocks, and what values, like thermal cover, are offered by hemlocks. If HWA is in your area or nearby, this may help you to “shop” for another species of tree that is well suited to the site and would offer similar values. Not many species offer the same unique benefit of winter cover that hemlocks do, but some come close. They include, in order starting with the best, northern white cedar, balsam fir, white spruce, and red or blue spruce.

Work with native plants from the range you are in. This won’t help stop HWA, but it will help to prevent future pest problems. HWA, like many other forest pests, was imported unknowingly. In the case of HWA, it is thought to have come to the United States on nursery stock from Japan. We have a diverse list of native species that are well worth planting. Let’s keep it that way!