When you’re practicing QDM, the most effective way to select bucks for harvest is by setting a minimum age, so throughout its history the National Deer Association has helped hunters learn to estimate the ages of live bucks. The advent of trail-cameras brought this conversation to the forefront of deer hunting, since now we could capture, study and discuss images of live bucks at our leisure and even plan our harvest choices long before we ever encounter these bucks in the woods.

But the advancing technology of trail-cameras, and the use of the Internet for sharing and discussing the images they produce, hasn’t changed this fact: Estimating the age of live bucks is not an exact science. It’s an individual skill that is improved through practice, experience, and follow-through. Put two hunters together in the same room with a trail-camera photo of a buck, and the question of age is going to come up – so NDA will continue to provide information to help them get better at aging. In these discussions, we see a lot of the same basic mistakes. Here are seven of the big ones you should avoid, and by doing so, you will become better at estimating buck age.

Sin 1: Use Sketchy Photos for Estimates.

Estimating buck age requires you to study body characteristics and physical proportions in areas like the stomach, chest, neck, hindquarters and legs – and to compare these parts to each other in the same photo. The ideal photo angle meets these criteria: 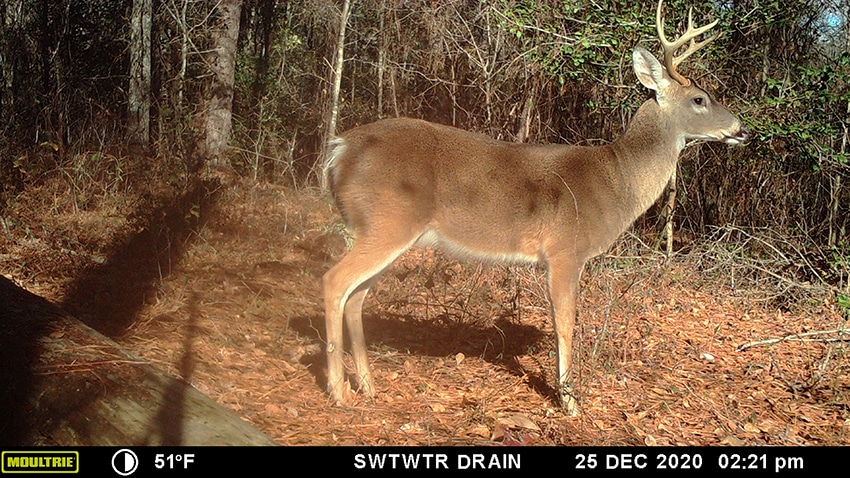 If the photo is sketchy, your age estimate will be, too. I’ve seen people try to estimate the ages of bucks in photos where they are walking directly toward or away from the camera, when major parts of the buck are chopped off by the photo frame or hidden by vegetation, when the buck is too far from the camera to be clearly visible, or when it’s in the middle of some athletic stunt like running or jumping.

Yes, I know. Capturing the ideal photo is not easy. On trail set-ups, bucks are usually walking, running, or holding their noses to the ground to follow scent. On scrapes, they often flex, bend and torque their bodies like yoga masters. In food plots, they can drift in from anywhere, and your odds of getting a broadside shot are slim. Bait sites can be good, because the deer usually stands around eating and taking selfies for a few minutes, and a few of those selfies may be snapped when his head is up and not down in the bait – but not everyone can legally place bait for cameras.

To overcome the difficulty of capturing good aging photos, work to capture as many photos as you can. And with that, I present: Sin 2.

Even in the ideal broadside, head-up, standing-still photo, there can be variables that will influence your age estimate. For example, a buck might be posturing to show his aggression toward another buck you can’t see. This might include bristling (standing the hair on end), which makes the buck look bigger to potential competitors but also can make him look older than he really is. I’ve even seen sequences in which a buck is breathing heavily, making his stomach rise and fall dramatically from one photo to the next.

To compensate for these one-off factors, study as many photos of the same buck as you can before settling on an estimate. Set your trail-cameras to take bursts, or multiple shots for every trigger, to make sure you get multiples of any one deer. And create photo storage files for recognizable bucks, where you save and can refer back to shots from last week, last month, or last season.

The body characteristics you need to study are most evident when a buck’s annual testosterone cycle is near its peak, which is during the pre-rut and the rut peak. At other times of year, you can get conflicting signals, with different parts of a buck’s body suggesting wildly different ages. This is particularly true during spring and summer. Almost all summer bucks have thin necks, which makes them look younger.

Do not attempt to estimate age from late winter through late summer. It’s a good rule to wait at least until the velvet is off the antlers, and even then be cautious. The closer you are to the rut, the better. If you’re watching a particular summer buck, keep trying to get more photos of him as the rut approaches.

Sin 4: Gawk at the Antlers.

Use your thumb, a Post-It note, duct tape, or any other handy object to cover them up if you need to, but whatever you do, don’t look at the antlers first. As we’ve said many times before, every age class of bucks will include some deer with below- and above-average antlers, and these deer can fool you badly if you look at antlers first. You can make mistakes like killing young bucks with great antlers or passing mature bucks with small antlers.

Study the body first. Make your age estimate. Then, if you are still torn between two ages and you really need a tie-breaker, consider the antlers. Longer beams, heavier mass and wider spread argue for the older age – and vice versa. That’s the only time we recommend antler proportions being considered in an aging discussion. There’s just too much overlap in antler size across age classes to take this risk.

Body characteristics are critical for aging bucks, and we know that body sizes vary from region to region. While the comparative differences in body characteristics that point to age are usually apparent regardless of overall body size, there can be exceptions. I’ve noticed that bucks in lower-quality soil regions, like the Lower Coastal Plain of Georgia where I hunt, display less obvious growth in muscle mass over time when compared to bucks in better habitat. This requires me to consider my location and develop a finer, local set of clues I look for when estimating age.

How do you refine your local eye for age? Avoid Sin 6!

Whether you are swinging a golf club, shooting a bow, or aging a buck, “follow-through” is important. With aging, this means pulling a jawbone or extracting an incisor tooth any time you manage to kill a buck that you previously aged in a trail-camera photo. Send that tooth off to a lab, or estimate the jawbone age, and then compare the pre- and post-harvest age estimates. Were you way off? If so, go back and study those photos in the light of new information and see how you can improve your aging technique. The more you follow-through on your age estimates, the closer you’ll hit to the target when aging future local bucks.

Case in point for Sins 5 and 6: I photographed the buck below during the peak rut in the relatively low-quality habitat of the Coastal Plain of Georgia. This particular photo does not present a strong case for full maturity, but after he was killed, the buck’s jawbone plainly showed he was likely at least 5 1/2 years old. This is the kind of follow-through that will help you improve your local buck-aging skills.

In every issue of Quality Whitetails, we offer you the chance to estimate the age of three different member-submitted bucks before you read what five expert panelists had to say about the same deer. Additionally, in our free weekly e-newsletter, we include a buck photo along with a chance to vote for your estimate in a reader poll. We provide feedback in the next newsletter. These interactive features help you sharpen your aging skills and learn the characteristics to look for even without trail-camera photos of your own to study. So, join NDA today to start receiving the magazine, and sign up for our free e-newsletter now.

To help you learn more about aging bucks on the hoof, NDA produced a comprehensive buck aging poster you can display where you hunt that uses color photos and a complete list of aging characteristics. You can also read this article for more information.