My wife Tes and I began our Quality Deer Management journey over 15 years ago with the purchase of a small farm in east-central Alabama. It had been in her family for over 20 years, and much had been done to improve it for native wildlife.

When we took the reins we decided to implement the Four Cornerstones of QDM with the end goal being more mature whitetail bucks. Life had taught us that the best way to accomplish a goal was to have a plan. Our plan was not created in one day or a simple discussion. Like the land we manage, our plan is a living, breathing, ever-evolving strategy.

First, we had to decide what a mature buck was and the odds of growing and holding them on a small property. After much debate, we decided to adopt the formula used for determining “shooter” bucks at Tara Wildlife, one of the South’s premier bowhunting destinations. That formula is:

Tara had proven most bucks that checked at least three of these five boxes were at least 3½ years old.

Another part of our plan addressed habitat. In our opinion, 60 acres of bahia grass pasture offered little benefit to deer or other wildlife. The other 155 acres consisted of hardwood ridges and draws, tupelo and oak swamp, and 25 acres of loblolly pine planted in 1995. By 2000, these planted pines provided excellent bedding for deer.

Time after time I received the familiar text, Big buck just appeared, I may shoot. My reply was always the same… YC, the shortcut for “Your call.”

In 2001 we began converting pasture land into habitat beneficial to wildlife. By 2005 we had planted an additional 20 acres of loblolly pine in two plantations. The remaining pasture land was allowed to revert to native vegetation and managed with fire and mowing. The old food plots (8 acres) were planted in the fall with a standard blend of cereal grains, clover and brassicas. We devoted 4 more acres of food plots and 10 acres to corn.

It would be three years before we shot a buck on the farm. Those were difficult years because we were not seeing the improvement in buck quality we expected. We used trail-cameras extensively, and in 2008, when it seemed our plan was failing, a trail-camera captured a mature velvet-antlered buck we named Stickers. He was no doubt a shooter. Our spirits soared.

We never saw Stickers in daylight, but trail-cameras continued to capture images of him at night. The end of the 2008-2009 deer season marked the third year we didn’t take a buck, but those photos were the inspiration to give the plan another year.

New texting shortcuts became useful. IHP (I hear pigs). PIF (pigs in field). DP (dead piggy). But it was apparent we were losing the war.

Summer and fall of 2009 proved unequivocally our plan was finally working. In November, Tes shot the Island Buck, a 215-lb. 8-point, with her muzzleloader. In December she shot the buck we had named Non-Typ, and in January she shot the buck nicknamed Hoss. Non-Typ and Hoss each tipped the scales at 225 pounds, and all three bucks were at least 4½ years old.

After the 2009-2010 season we adjusted our harvest formula to reflect what we thought was a 4½-year-old or older buck:

In the summer of 2010, a trail-camera photo revealed a bachelor group of four mature bucks. We named them Shorty, Lops, Oops and Flop and designated them all as shooters. That year also brought more changes. Tes and I discovered texting, and in these messages we described deer movement and sightings of deer, especially bucks and hogs.

These messages became added entertainment to our hunts. We encouraged each other on what to shoot and how long to stay on stand. Tes developed the habit of sending a message like… A really nice buck just appeared, I may shoot him.

My reply was always… Your call.

Once my reply was sent, I waited to hear the shot that seldom came.

In late January 2012, a trail-camera captured an image of a huge buck we named Niner. We did not see him in daylight that year but captured several more trail-camera images of him. In July, we began getting regular images of him in velvet. He was going to be big. In December he strolled into a food plot where I sat. Tagging Niner was worth all the work and proved we were on track. He weighed 240 pounds, sported a 21-inch inside spread and 9 points.

Bucks that call our farm home no doubt venture onto adjoining properties, especially during the rut, and may be tagged there. That’s not a bad thing when everyone is working to achieve the same goals.

In late January 2014, a freak snow storm dumped 6 inches of snow on the farm. Needless to say we were excited to hunt in these rare conditions. Daylight found us in stands on opposite sides of the farm. To my surprise, neither of us had seen a deer by 8 a.m. A text from Tes stated her surprise and hopes the deer would get on their feet later in the morning. At 8:45, I heard her shoot.

Just rattled in and shot a really nice buck. You should try it, she texted.

As I reached into my pack for my rattle bag, I snickered to myself and thought “What the heck?” Five minutes later, Shorty was standing 50 yards in front of my stand, searching for the buck fight.

Shorty got his name from the short tines on his 20-inch wide rack. He weighed over 200 pounds. Both bucks were estimated at 5½ years of age. Our QDM journey was paying huge dividends.

There were other mature bucks using the farm. Handle Bars, Tall Ten, Popeye and Hightower come to mind.

In 2006, the first feral hogs, a sow and her small pigs, appeared on the farm. Tes killed the sow, but the pigs disappeared. By 2014 the hog problem had blossomed into a full-fledged onslaught. We worked with one neighbor to build traps and began removing large numbers of hogs, but the invasion was overwhelming. In 2010, after losing our entire corn crop, we knew our plan had to change. That was the last year we planted corn, chufa, milo or any grain. Our focus shifted to planting summer clovers in hopes the pigs would ignore them.

I sat in grateful silence and reflected on how “Trespasser” represented the QDM journey. How we and our like-minded QDM-practicing neighbors share the rewards in fulfilling NDA’s Four Cornerstones for success.

New texting shortcuts became useful. IHP (I hear pigs). PIF (pigs in field). DP (dead piggy). But it was apparent we were losing the war. In 2016, we created a cooperative with two neighbors, and each of us purchased Jager Pro® traps with cameras and began removing entire sounders of hogs at a time. Despite the effort, native wildlife continued to be affected, especially the deer. Over the next three seasons, only two bucks were shot on our farm. Both were estimated to be 5½ years old and weighed less than 190 pounds.

Throughout this time, Tes kept her powder dry. She shot hogs and does but let buck after buck walk. Time after time I received the familiar text, Big buck just appeared, I may shoot. My reply was always the same… YC, the shortcut for “Your call.” After each message I anxiously awaited a shot that never came.

The 2018-2019 deer season marked three years since Tes had tagged a buck and two for me. We were seeing mature bucks but nothing we wanted to shoot. In truth, we were both hunting a buck that appeared in trail-camera photos the two previous Octobers. He was an Alabama giant named Stickers because of his heavy 15-point rack. He was and is a ghost and has never been seen on the farm after mid-October.

January 16, 2019 was like any other day for Tes and me. The morning hunt was non-eventful even though the rut was in full swing. We headed back out in the afternoon. Our stands were a quarter mile apart and took advantage of a cool north wind. At 4:40 p.m., my phone buzzed.

Big buck just appeared checking does in field, I may shoot.

I read the message and chuckled to myself. I thumbed YC and hit send.

I could hardly believe the message had time to reach her before the shot! In reality, the buck had entered the field a couple minutes before Tes sent her text. Always the photographer, she had taken time to observe his behavior and enjoy the moment while capturing live photos of the newcomer buck (including the photo at the top of this post). Within seconds of the shot, my phone buzzed again. I answered the call and a breathless Tes said, “He’s down! What a rack! Must be more than 20 inches wide. We’ve never seen this buck before, in trail-camera photos or live. I’m calling him Trespasser! Can you come?” 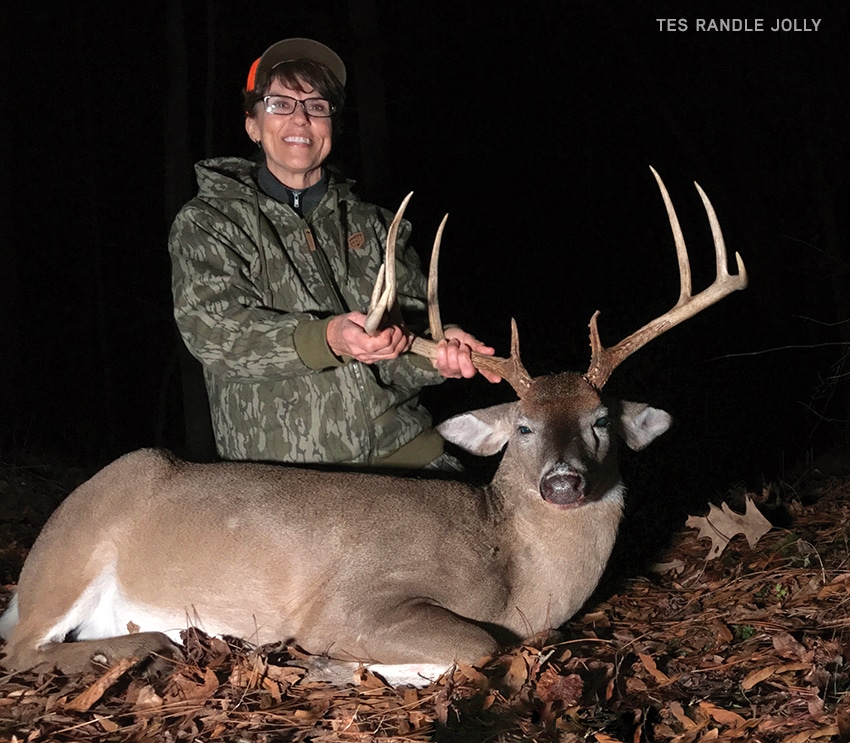 After hearing Tes excitedly recount her hunt, I agreed to head her way. When the call disconnected, I sat in grateful silence and reflected on how “Trespasser” represented the QDM journey. How we and our like-minded QDM-practicing neighbors share the rewards in fulfilling NDA’s Four Cornerstones for success. Trespasser’s core range was likely on one of our neighbor’s land. Bucks that call our farm home no doubt venture onto adjoining properties, especially during the rut, and may be tagged there. That’s not a bad thing when everyone is working to achieve the same goals. Most importantly, it’s for the good of whitetails, where our passions lie.

In that moment I realized what an incredible journey we were on. I whispered a prayer of thanks, gathered my gear and thumbed OMW. On my way!

About the Author: Ron Jolly is an NDA member and award-winning outdoor videographer and writer from Alabama. As Executive Producer for Alabama’s Department of Conservation, Ron created the Outdoor Alabama TV show, and he has shot, written and produced videos for Primos and many other outdoor companies. His wife Tes is an award-winning wildlife photographer and outdoor writer whose images have graced many covers of NDA’s Quality Whitetails magazine.