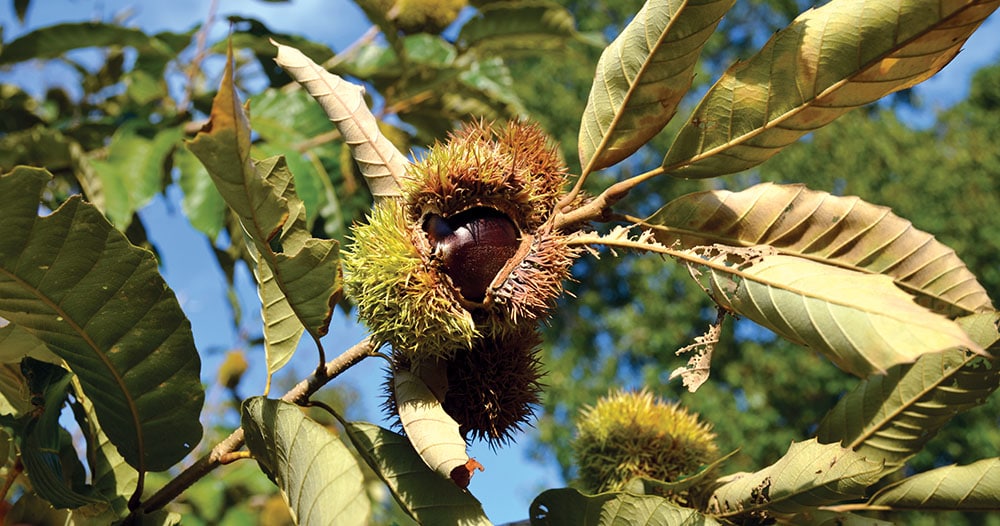 Forest researchers in New York may have found a way to restore the once-dominant American chestnut that doesn’t involve non-native chestnut genes. You can help.

Apple. Persimmon. Jujube. Pawpaw. Pear. Sawtooth oak. In the never-ending pursuit of the ultimate hunting property, mast production is common to the conversation. Spend just a little time around die-hard QDM’ers and chestnuts are likely to enter the discussion.

In days past, the American chestnut was among the most common trees on the landscape. From Maine to Mississippi, chestnut trees spanned the Appalachian Mountains and beyond, offering to wildlife an abundance of nuts with more digestible protein than acorns or beech nuts. Some estimate that American Chestnut comprised a quarter of the standing timber in the eastern United States prior to its downfall. In the wake of the infamous chestnut blight, caused by the invasive Cryphonectria parasitica fungus, naturally occurring American chestnut trees have become increasingly rare within their historic range.

Today, hunters seeking to offer local whitetails this highly preferred food source have options including Chinese chestnut trees and hybrids which include genes from both the Chinese and American chestnut. As many deer managers would tell you, establishing these on your hunting grounds can make whitetails feel right at home. However, concern over the loss of the native American chestnut and its unique characteristics has been the cause for research into restoring the species.

Those words come from Dr. William Powell of the State University of New York’s College of Environmental Science and Forestry (SUNY-ESF) in Syracuse, New York, who has invested decades into restoration of the species.

“I have nothing against hybrid chestnuts, which can be a good source of hard mast,” said Dr. Powell. “However, these won’t grow up into the canopy of a forest, so they won’t become common in our forests as American chestnuts once were.”

After decades of research and careful genetic testing, a new hope is on the horizon.

Dr. Powell, along with Dr. Charles Maynard, who is now retired from SUNY-ESF, have created an American chestnut tree that will resist the fatal blight. This is not a hybrid tree – it is not a cross between different species. Rather, true American chestnut trees have been genetically altered to help them defend against the fungal parasite. All of their genes are American chestnut genes except one, which has been borrowed from wheat. By including this gene, Dr. Powell and Dr. Maynard have created a transgenic chestnut which produces a special enzyme called oxalate oxidase. This enzyme does not harm the fungus but breaks down the damaging oxalic acid produced by the fungus so it cannot harm the tree’s cambium.

Time to start the restoration? Not so fast. Before debuting their transgenic trees, the chestnut team at SUNY-ESF has left no stone unturned in ensuring their handiwork comes without unintended consequences. The genetically modified chestnut trees have been tested for their interactions with soil microbes. The nuts have been subject to chemical analysis. Leaf decomposition was examined, as well as the effects the leaf litter would have on fish and aquatic insects. There were even trials that involved feeding the leaves to caterpillars to ensure that the new food is safe for the little guys. There are regulations from the USDA, the FDA and the EPA to ensure that genetically modified organisms are adequately studied prior to release. These requirements are currently being met, and, if all goes well, we can expect reestablishment at USDA test sites to begin in 2020.

In the meantime, there is still work to be done on the ground. In anticipation of the blight-resistant American chestnut trees, landowners are encouraged to establish “mother trees” on their properties. These are plain old American chestnut trees without blight resistance. Chestnut trees typically produce pollen before they are mature enough to produce chestnuts. Because it takes time for a fungal spore to find each tree, many of these mother trees will survive long enough to produce viable flowers. This will offer a head start to the restoration effort, as there will be American chestnut trees capable of receiving pollen from their transgenic counterparts once those trees are capable of producing it. This can be done by directly applying pollen to mother trees or allowing recombination to happen the old fashioned way. Some of the resulting offspring will not carry the gene protecting them from blight, but about half will, aiding in the gradual resurgence of the species.

One of the most important ways hunters and habitat managers can contribute is to help identify wild populations where they still exist. In places where American chestnut was once common, stump sprouts can sometimes be found, if only in the understory. And, just because these vestigial shoots are susceptible to the blight does not preclude their genes from being maintained in the next generation of trees. Like any species that covers a vast geography, there is variability in the genetic makeup of American chestnut, and these variations result from their provenance. That is, local populations are better suited to that area than individuals of the same species which are transplanted from afar. This should come as no surprise to any NDA Deer Steward graduate. In this regard, trees aren’t so different from whitetails.

“Larger whitetails may be more desirable to a deer manager,” said Allen Nichols, President of the American Chestnut Foundation’s New York Chapter, “but the heavy-bodied deer from northern climates are not suited to the hot environment of Florida. The same species may be native there, but the genetics of local herds result in animals better suited to surviving in that region. It is like that with chestnut trees. The chestnut trees from your area may have genes that are not found anywhere else.”

Allen has American chestnut nuts available to establish mother trees for interested landowners and land managers. If you are interested in establishing a mother tree yourself, contact him at this email address.

The ESF American Chestnut Project at the State University of New York (SUNY) has developed a blight-tolerant American chestnut tree and is working to restore this iconic and valuable cultural symbol to the forest ecosystems of the eastern United States. For more information about the project, visit www.esf.edu/chestnut or write to Kaitlin Breda.