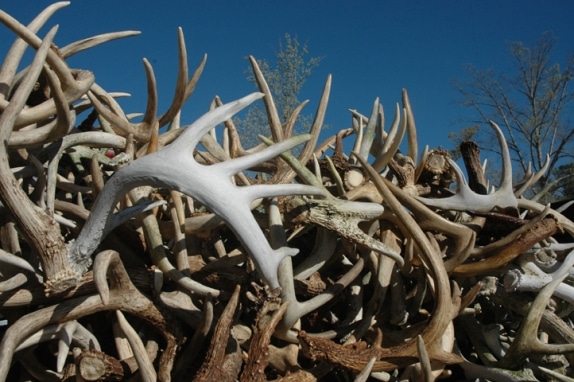 There’s a simple rule underlying antler development in whitetail bucks that all hunters should understand. Awareness of this rule provides a bridge over many of the false expectations, myths, mistakes and frustrations that lie waiting along your path to QDM success.

The rule is this: If you could know all the gross antler scores for every buck a local population could potentially produce, the scores for each age class will form a bell-shaped curve when plotted on a graph. I know this sounds an awful lot like geometry or algebra, but bear with me. It’s easier than it sounds, and it’s worth your time. The antler-growth bell curve has significant implications for your QDM efforts.

 The peak of a bell-shaped curve represents the average of the data plotted on the graph, and the slopes on either side of the peak are the “outliers,” the individuals that deviate from the average, either below or above.

From region to region, the span of the bell curve will change positions along the X-axis. Regions with better habitat and better soils will have a higher maximum range and a higher minimum range. Pick any random location in Wisconsin, for example, and the extreme upper end of the bell curve for 5 1/2-year-olds is probably somewhere over 200 inches gross. Do the same thing on a coastal barrier island in my home state of Georgia and the extreme upper end may not break 100. But no matter where you put your finger on the map, you find a bell-shaped curve in every buck age class. If you chart each age class on the same piece of paper, you find the bell curves overlap significantly. You may find bucks of three, four or more age groups with the same gross score. Rare high-scoring young bucks match average-scoring middle-aged bucks and rare low-scoring mature bucks.

One of the best examples of this I ever saw was in South Texas. I was lucky to get to participate in a day of deer research, Texas-style. Tagging along with researchers from Texas A&M-Kingsville, I watched helicopters fire rocket nets to capture more than 75 antlered bucks in one day. Each deer was tagged, measured, poked, prodded and released. This was in the so-called Golden Triangle, the famous land of el Muy Grande, so you might think I got to see a lot of gargantuan bucks. Actually, not even one. Out of dozens of mature bucks captured and handled that day, the best I saw might have approached 150 inches gross, and he far out-scored the rest. A pile of mature bucks in the 110s and 120s were seen that day. That’s the bell-curve in action. Most mature bucks, even in famous areas like South Texas, are in that peak in the middle of the bell curve. So how is South Texas so well known for los Muy Grandes? Statistics! Crank out sheer numbers of bucks in older age classes and you increase the occurrence of those rare top-performers. This requires vast acreages under private control with very light hunting pressure, especially on bucks, until they are fully mature, and South Texas has these conditions. Back east, those rare top-performers that might break into the 170s and 180s at 6 1/2 years of age are often shot long before that.

For a visual of this, see the graphs above. You can see real data from three different soil-quality regions of Mississippi, expressed in some very eye-opening illustrations first published in Quality Whitetails by Drs. Steve Demarais and Bronson Strickland of Mississippi State University.

Sound research has shown we can’t make measurable changes in genetics in free-roaming whitetails through selective harvest. In other words, you can’t change the bell curve’s shape. However, in a QDM program, you can shift the entire bell curve to the right (increasing antler-score potential in each age class) by improving habitat, sex ratios, herd health and other factors. The highest-scoring and lowest-scoring bucks in each age class will still be rare compared to those with average scores, but their actual score potential will be higher.

Here are just a few of the important lessons we can learn from the antler-growth bell curve:

Let’s get past this idea of “inferior” deer. There’s nothing wrong with bucks in the far left slope of the bell curve for their age, any more than there’s something right with bucks at the other extreme. That these models are part of the bell curve at all indicates they are all models that work under existing survival pressures – the inferior models are extinct. If a whitetail with 400 inches of antler was a viable model in the wild, it would have a place in the bell curve. But whitetails of this size exist only where they are created and cared for by deer breeders. Outside the fence where survival must be earned, a 400-inch whitetail is the inferior deer.

Select Bucks for Harvest Based on Age

If you ultimately want to increase the numbers of mature bucks in the high-scoring end of the bell curve, you must avoid shooting them when they are immature. The problem is, these uncommon bucks have large antlers at an earlier age, often meeting antler-based harvest rules such as spread and point restrictions before they are middle-aged.

Judging age is not as easy as judging antler spread or number of points, but it can be done. It’s a matter of getting to know the physical characteristics of your local deer, practicing your skills in the field and with trail-camera photos, and then checking your estimates (using jawbone or cementum annuli aging) to refine your skills whenever a buck is harvested. Yes, accuracy requires practice, but the alternative is to continue removing high-scoring bucks before they’ve had a chance to show you their bell-curve potential.

Age means something, so measure your achievements by age. Regardless of antler size, a mature buck is a significant achievement for any hunter. To make it to maturity, a buck has to run a gauntlet of death in many forms. Those that are easy for hunters to see and kill seldom make it through. Those that are hard to see and kill fall victim to other things like hemmorhagic disease, infections of the skull and brain caused by fighting injuries, automobiles, rut exertion followed by winter stress, and more. What’s left are the truly uncommon survivors, and their numbers decline every year. Charted by age class, these numbers present a different kind of shape on a graph: a steep slope declining to a vanishing point. Kill a buck whose age is near the very bottom of the slope, just before the line crashes into the X-axis, and you have killed the rarest of bucks in the population. When you are starting out managing deer, a 3 1/2-year-old may be a rare veteran that represents a great achievement. After success building age structure, reaching 5 1/2 might be a remarkable milestone for a buck where you hunt.

I look forward to the day when no shoulder mount of a buck displays the full accomplishment without the jawbone, or a cementum annuli lab report, mounted nearby for all to see.