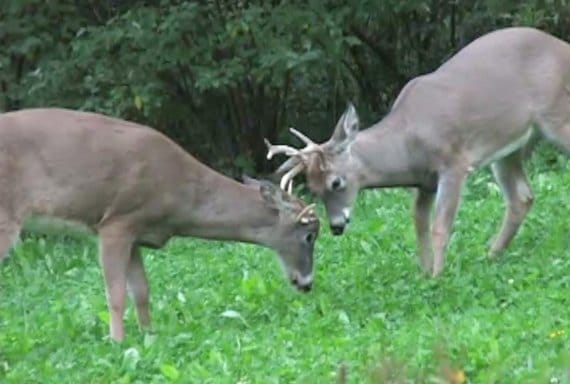 Editor’s Note: Hunters in Michigan and other states are currently debating the pros and cons of mandatory antler point restrictions (APRs). QDMA, as a national organization, does not propose or promote APRs, though if asked to review them we will support specific APRs if they meet a three-part test. Some opponents of APRs in Michigan have unleashed lots of misinformation in recent weeks in an effort to stop proposed regulations, some of it about QDMA. Jim Brauker, a QDMA member from Michigan, was once an opponent of APRs. He now supports them, and in this article he makes the case for why he changed his mind using facts and information available publicly from Michigan DNR.

Many Michigan hunters are skeptical about the idea of antler point restrictions (APRs). Some who have never hunted in a region with mandatory APRs express the fear that they will see fewer deer and have less success if they are not able to harvest every buck they see. Others say that hunters will get frustrated and move to new locations or leave the sport.

I used to be strongly opposed to mandatory APRs. I expressed my concerns on the Michigan Sportsman’s Forum on January 10th, 2010: “If I were a regulator in today’s situation, there is no way I would try to impose [APRs] on the state’s hunters, because most do not want them…You cannot force it on people who either don’t understand it or don’t want it.”

I soon came to believe I was wrong about that. I had been a traditional hunter from the time I was a teenager growing up in the Coldwater, Michigan area in the 1960s. My first two bucks were killed in the state forest in northern Clare County when I was in my 20s. I lived out of state from the mid 1980s until 2006. Whenever I could, I would come back to hunt the firearms season on my wife’s family farm in Lenawee County. We hunted opening day of gun season and sometimes (every few years) got a buck, which was our goal at the time. Hunting season was exciting but we did not see very many bucks after opening morning because our hunting techniques were so poor. We had poor scent control, poor stand placement and hunted the same stands too often.

My first introduction to the concept of passing young bucks and changing my hunting habits came around 2006. My hunting experience rapidly evolved to the point that I was seeing numerous bucks every season on the same ground I had hunted with frustration in earlier years. I helped to start a local QDM Cooperative in 2009 and really believed that through a grassroots movement the idea of passing young bucks and harvesting them when they were older would take root, and I did not like the idea of mandatory APRs.

My thinking started to change after I heard about a unique experiment that had been tried in Leelanau County, Michigan (Deer Management Unit 045), starting in 2003. A countywide APR was put in place requiring that a buck must have at least three points on one antler. After five years under this regulation, hunters were asked in a survey if they wanted to continue the regulations, and a whopping 72 percent responded in support.

Upon further investigation, I found there had been several areas where mandatory APRs had been tried, and in every case, the majority of hunters were in favor of them when surveyed several years later (refer to the table below).

APRs were not continued in all these regions because permanent APRs were put in place only if 66 percent of hunters and landowners were supportive when surveyed. In every case the majority was supportive, but in some cases the required 66 percent super-majority was not achieved.

Leelanau County changed dramatically from the three pre-APR years of 2000-2002 (refer to the charts below). Back then, 67% of the bucks brought in to check stations were yearlings (1½ years old with their first set of antlers). During the last three seasons, that number has dropped to an average of 23%. Over the same period, harvest of 3½-year-old and older bucks went from 13% to 50%. The rest of the Lower Peninsula has improved, but only slightly. Yearling harvest went from an average of 70% to 62%, and harvest of bucks 3½ years old and older rose from 10% to 16%. So improvement is coming, probably because of voluntary APRs, but it is slow. Very slow. 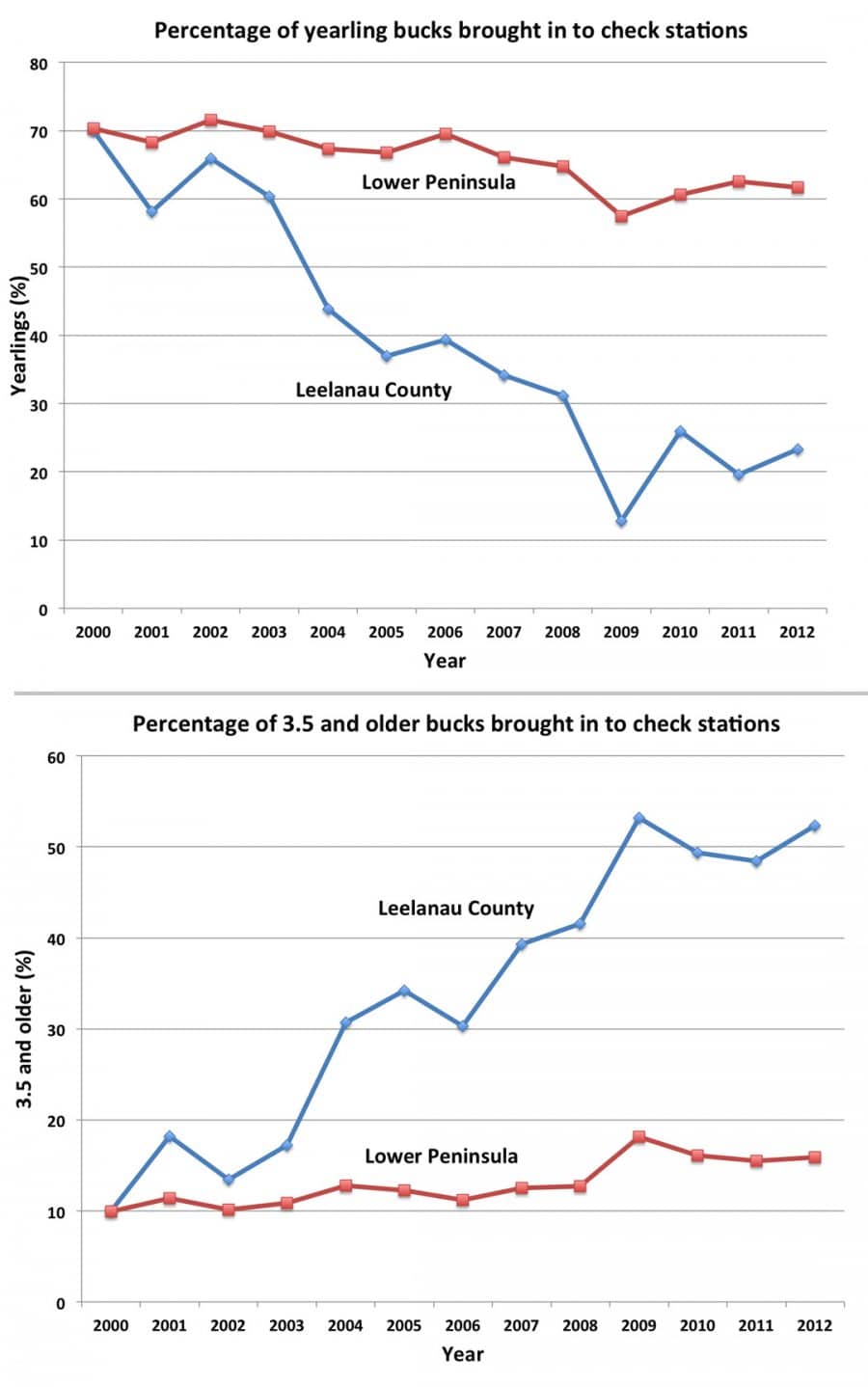 The APRs in Leelanau County have led to an astounding level of change in the age structure of bucks, but it came at a cost. During the first year of APRs (2003) the buck harvest success rate fell from around 22% to 15% (refer to the chart below). So that first year, fewer hunters harvested a buck. But by year two of the experiment, harvest rates were back up to 21%, and remained at or above pre-APR levels in eight of nine seasons (19% to 38% harvest success). So hunters there had to sacrifice one year while passing the younger bucks and letting them grow, but after that, harvest rates averaged 26% and the deer they were killing were older and bigger than before APRs. 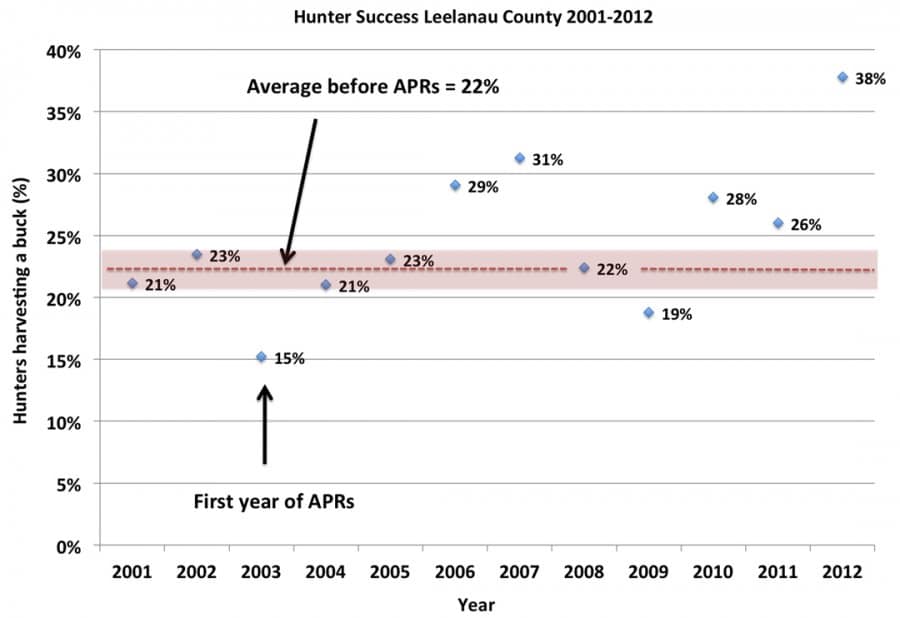 Leelanau County leads the state in the percentage of 8-point and larger bucks in the harvest. Before APRs, they averaged 34% 8-point bucks. Over the 5 years from 2007-11, the average had been 61%, compared to only 25% in the rest of the Northern Lower Peninsula, and 36% in the Southern Lower.

Recently, the DNR sent out a survey to hunters in 12 adjacent counties around Leelanau County asking if they wished to also begin a 3-point-on-a-side APR. A stunning 68.5% were supportive of the new regulations. It is a bit perplexing that hunters seem to want mandatory APRs, yet they could achieve the same goals through voluntary APRs, but voluntary APRs do not seem to move the bar very quickly. Why doesn’t everybody who wants an older age structure simply start passing bucks so that everybody would be happy? The answer lies in the science of “Game Theory.”

A principle of Game Theory called the “Nash Equilibrium” predicts that if a bunch of hunters are sitting in the woods and each of them knows that all the others hunters are likely to shoot a young buck, even though each hunter knows they would all collectively benefit from doing otherwise, most will choose to shoot young bucks. In its simplest terms it is explained by the often-heard comment, “If I don’t shoot it, the next guy will.”

Why is it that most hunters want to continue under mandatory APRs once they have experienced them? Most hunters do not get a buck every year. In fact, in Leelanau County, only about one in four hunters get a buck in any given year. Why is it then that 72% of hunters were in favor of continuing APRs there when given the option of voting against them? This puzzled me for a long time. But then I saw a video of a young lady hunting with her dad. Lisa Vanderveen was only 15 when the video was made. It shows her in a pop-up tent with her dad, Randy. Randy does not own his own hunting property, so they were sitting in a small wooded area where they have permission to hunt. A young buck came into a clearing within 30 yards, Randy turned the video camera toward Lisa, and you can see a big smile on her face. Pretty soon another buck came out. They started nuzzling, then lightly sparring. Later, one of them laid down only a short distance from Lisa, who turned to her dad and said “That is so cool.” She ended the day shooting a fat groundhog with her compound bow. Lisa preferred to wait for a fat doe rather than shooting a young buck.

This scene led me to think about my own experiences in the woods and how much different it might have been. I hunted for over three decades in Michigan without ever seeing bucks play or spar or lay down near my stand. Why? I would have shot that first buck when he walked into the clearing, which would have disrupted the area and caused me to miss everything else that would have gone on. In that regard, I think I am like many other hunters in Michigan. I missed much of what was most exciting in the woods, including the opportunity to see more deer and to see other wildlife and to watch the day unfold without disrupting the scene.

I wonder, would Lisa’s experience have been better if she shot that first buck she saw in the morning, or was it better to spend the entire day with her dad enjoying nature? I think the answer for her and for most hunters is that killing something, especially a trophy, is not the most important thing. The most important things is the experience of being in the woods.

Getting meat and taking a trophy were two of the lowest rated items. “Excitement of seeing deer” was rated very high. I have come to believe that the reason people like mandatory APRs so much, once they have experienced them, is the quality of the hunt is dramatically improved. Hunters not only see more bucks, but they get to see them doing behaviors that they would not be seeing if they shot the first buck they saw.

Please take a really close look at the chart showing the yearling harvest from check station data in Leelanau County. Notice that it starts out with 58-70% yearling harvest in the first three years. Then notice it falls off to near 40% in year two of the APRs (2004), after which the harvest hovers between 30 and 40%. By this time, the full affect of APRs is being felt. And then something amazing happens. Over the four years from 2009-12, the yearling harvest drops further to between 13 and 26%.

What caused this change? It is not explainable based on the regulation alone. Far more yearling bucks are being spared the last few years than can be explained by a regulation. I believe that this shows that hunters evolve under APRs and begin to change their criteria for buck harvest. Years of observing the behavior of young bucks has perhaps led them to be able to distinguish young bucks from older ones, and they have begun to recognize that a young 8-point is no different than a young spike or 4-point, and they then may have begun to pass legal bucks based on new thinking and new criteria. In fact, it appears that mandatory APRs may foster voluntary APRs.

Most people who have hunted under mandatory APRs want to continue them. I submit that the reason has to do not so much with shooting bucks with bigger antlers, since most hunters do not even get a buck, and most don’t rate getting meat or a trophy very high, but that it has more to do with the changed quality of their experience in the woods. It is really about the “excitement of seeing deer,” one of the things hunters rank way above harvesting a deer.

About the Author: Dr. Jim Brauker of Michigan is a QDMA member and co-founder/Director of Whitetail Ambush Secrets, an educational website devoted to teaching land management techniques for small property owners. He is a Level 2 QDMA Deer Steward.