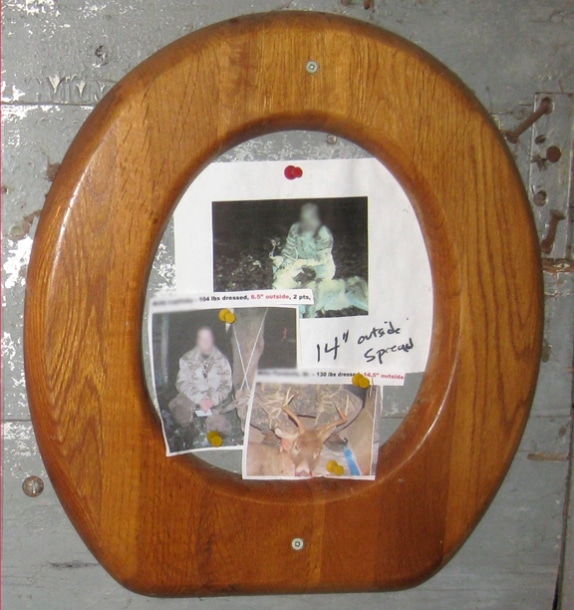 It’s going to happen in every hunting club, QDM Cooperative, or any other group that hunts deer together: Someone is going to shoot a deer the other hunters didn’t want shot. It might be a button buck. It might be that yearling with 8 or more points that is going to be great one day and is on the Absolutely-Do-Not-Shoot-This-Deer-Are-You-Nuts list. It might be a doe if you’re trying to build herd density. Whatever it is, group leaders must now decide the consequences. And I just encountered a new consequence: Drop that hunter in the toilet.

You can choose heavy monetary fines. You can assign grueling chores. You can kick people out of the club. You can take other steps that amount to humiliating punishment to make sure people follow the rules in the future. But it’s my opinion that these steps tend not to produce compliance so much as anger, frustration and resentment – especially if exceptions are made for group leaders or their closest friends or family. These situations can break down a group, ruin friendships, and spoil the fun for some or all group members. In deer hunting, the death of the wrong deer is a small bump in the road, but the death of fun is the end of the road.

The better alternative is to reward the rule-followers. Create incentives or rewards for people who show up on food plot work day. Give special honors to those who kill bucks on the group’s hit list. And there’s one other idea: Create “punishments” that are painless and also hilarious. Kind of like the old tradition of cutting a chunk out of the shirt tail of a hunter who has missed a deer – an embarrassing rite of passage that is still in the spirit of good fun.

Thus, the toilet bowl. A friend sent me this photo and explained that whenever someone kills a buck that is too young to be on the Hit List, their face goes in the toilet. That is, their photo is pinned up in the middle of a toilet seat that has been bolted to the wall of the hunt camp, and it stays there for one year. That’s it. No fines, no swirlies, no cleaning of actual toilets, no being shown the door. I laughed out loud when my friend told me about the toilet seat, and that’s the point – it is funny. Everybody gets a laugh out of it at the hunt camp, including those whose faces are floating in the bowl. But it’s also just uncomfortable enough that you will do your best to miss the toilet.

For those who have no qualms about landing in the crapper, this camp also has a rule that if you make the toilet bowl three times, you are then out of the club. This leads me into a quick list of tips for managing rules and infractions among a group of hunters:

What ideas do you have for fun ways to “enforce” the rules? Please share them in the comments section below.

And yes, you CAN get a toilet seat in Mossy Oak.