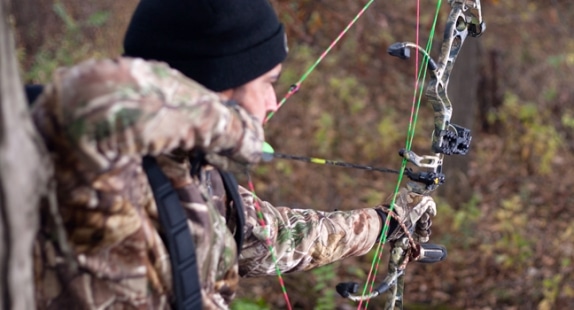 Understanding the fine movements of wind at your stand location can give you an advantage over mature bucks, as I explained in my article on revealing the wind. A big part of this strategy involves awareness of thermals.

A thermal is a column or stream of rising air created by temperature differences between air at ground level and air higher in the atmosphere. In the morning, as the sun heats the ground, air at ground level rises. The opposite occurs when the sun is setting and the earth starts to cool down. Air cools and settles back toward the ground, pulling your scent along with it. This situation in the late afternoon can become very problematic. I don’t want to say I don’t hunt in the evenings because of falling air currents, but I will say 85 percent of my hunting is done in the mornings through mid-day.

Let’s say you’re hunting a ridgetop food source to your south, with a known thicket and bedding area in the bottom to your north. You have a slight breeze of around 5 mph out of the north. About half to three quarters of the way up the hill is a natural drainage/seepage coming out of the hill forcing deer movement to funnel around the top of it. Perfect! Deer will emerge from the bedding area in the bottom and meet you at the funnel point! You’ll be forced to shoot your way out, right? Except, when you use your smoke bombs in the off-season to check your wind, you will find, on an evening with a slight breeze of say less than 10 mph, as the air cools and drops, your scent is going to end up in the lowest spot around you – the bedding area. Just as fog and frost settle in the lowest ground, so does your scent as the day cools toward dark.

As you start to pay attention to rising thermals and falling currents, you’ll find you can get pretty good at feeling when the change occurs. As the sun starts to set you can actually feel the moisture building and the air cooling. Soon after, your scent will start to pool in the lower areas with the cool air. 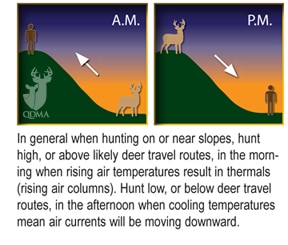 The general rule of thumb to avoid trouble with thermals is to hunt high in the mornings and low in the evenings, as shown in the graphic on the right. Of course, as with anything there are always a few exceptions.

This actually happened to me. I was hunting a great ridge for buck movement in the rut. The ridge ran west to east. To the north and northeast were two very well-known doe bedding areas. Entering the stand from the south, I was positioned about a quarter of the way down from the top where a seepage and an old fencerow created a natural interior edge that forced deer down the edge around the top of the seepage. With the wind out of the north to the northeast, on a morning with rising thermals, a buck coming from the west could take advantage of the conditions to scent-check those bedding areas for receptive does. With my stand placed about 16 yards on the south side of that natural funnel, I should be set, right?

The first time I had a cold, high-pressure morning with the winds out of the north, I couldn’t wait to climb into that stand. I think I even called my taxidermist to tell him to get ready, it’s a no-brainer. Man, was I surprised. As day was breaking, I kept checking the wind. With a slight breeze out of the northeast, I was extremely concerned to learn my scent was actually drifting north and down the hill, right where the deer were going to be coming from!

What? It couldn’t be. Everything was right. The sun was out, not a cloud in the sky. Slight breeze out of the north. So why was this happening? I actually stayed there checking the wind constantly to see if it was going to change. I didn’t want to leave, but I knew if it didn’t change soon I would have no choice but to get down and get out of there. Then, all of a sudden, things started to change. The wind was starting to move like it was supposed to. I went on to see 11 bucks that morning, 10 of which were within 18 yards! (I like to get ’em close.)

It didn’t dawn on me until later what was happening. Everything was perfect, except I failed to consider that a north-facing slope takes longer to catch the morning sunlight, especially in the late fall and into winter. Given I was a quarter of the way down the hill, the sun was shining on top of the ridge but it hadn’t yet warmed the air or the ground down where I was, so that air was cooler and falling, like in the evening. Once the sun reached a point where it was high enough to warm the ground and the air above it, thermals started to rise and everything was back to normal.

Now when I hunt that area on a north wind and a high-pressure day, I actually hunt a stand in the bottom to the north of those bedding areas, trying to catch a buck at first light. Once the sun gets high enough to warm the hillside, I immediately get down, make a big loop around, come in from the south, and climb back in the original stand.

Yes, I have had days where I had bucks cruising within shooting distance of each stand, taking advantage of both the falling and rising air currents within a few hours.

The wind can totally ruin your hunt, or it can bring success if you play it right. Awareness of thermals is one key to ensuring that success.