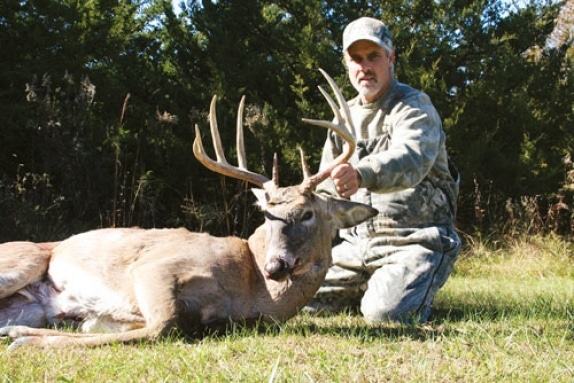 Years ago, a friend who was a very successful bowhunter told me, “If you want to kill big bucks, you have to hunt where big bucks live, and then you have to bottle em’ up!” The first part seemed obvious, but back then I was still learning, and he could see by the puzzled look on my face he needed to explain further. He unrolled a stack of topo maps and pointed to a place where the lines ran close together, explaining that this indicated the natural lay of the land was steep and narrow, creating a bottleneck. He was successful at taking mature whitetails because he searched out natural funnels that connected large areas of timber, thereby increasing his odds of an encounter with rutting bucks on the move.

All of that made sense, but my own farm didn’t have the same natural bottlenecks he had access too. I worked hard to improve my habitat so it did indeed become a place where “big bucks lived,” but I remained frustrated watching them travel by, often only yards out of range. However, I also watched as they changed their travel patterns due to something as simple as a wind-fallen tree, and that inspired me to create my own bottlenecks.

Whitetails don’t expend energy if they don’t have to, and if they can, they travel from bedding areas to food sources using routes that allow them to take advantage of any available cover. By identifying routes in areas that were naturally somewhat narrow and making those routes more narrow, I bottled the bucks.

Just as my friend did for me many years ago, I am sharing with you some real examples of what I have done on my own property in Iowa. Diagrams of four sites are shown on these pages.

Many of the problems we encounter while hunting can be eliminated altogether by turning natural travel corridors into narrow bottlenecks. For example, hinging trees to create a living fence in the area downwind of the stand or blind can prevent bucks from attempting to circle downwind when you are calling or rattling. You must be careful to leave yourself an entrance to the stand site that doesn’t cross the deer travel corridor or create a path through heavy cover that deer may also use. Leaving a few trees in my path that I have to step on or over usually discourages any attempt by deer to use the same path.

While enhanced bottlenecks are primarily used as an effective and efficient method of viewing and harvesting mature whitetail bucks, they also make fantastic sites for  trail-camera monitoring. The resulting photos give me confidence to hunt the stands that I assumed had little overall deer movement.

I’m going to share four examples of stand sites where I’ve bottled bucks. The first is included here. In the examples, most of the enhancement has been done with a chainsaw, but I’ve also gotten creative, and you should too. Old fencing, used pallets and other such scavenged items can be used to create funnels.

Here’s the first of four set-ups we’re going to discuss on QDMA.com. I hope you’ll take advantage of these ideas to begin bottling bucks this fall!

Bottled Bucks No. 1
Here in southern Iowa, our hilly ground is defined by small but steep ravines that fork off from larger drainages leading into ponds, creeks or rivers. Whitetails tend to use these ravines as travel corridors. In the setup below, I capitalized on this natural tendency and created a bottleneck that brought not just some deer by my stand but all of them. The wooded area is just over 100 yards wide, but it might as well be a mile when you’re bowhunting! There were multiple trails and runways used by deer, and it was impossible to be certain deer would not get downwind of me, so I went to work with my chainsaw. The wooded area consisted primarily of shingle oak (a less desirable tree species in this area) and a few scattered red oaks, so I hinge-cut anything that wasn’t a potential crop tree and formed an impenetrable barrier in two main areas. I left the most commonly used runway open, and I left a pathway along the fence to funnel deer to the main runway. The effect was to shuttle deer within effective bow range of my stand while keeping them from getting downwind of me. 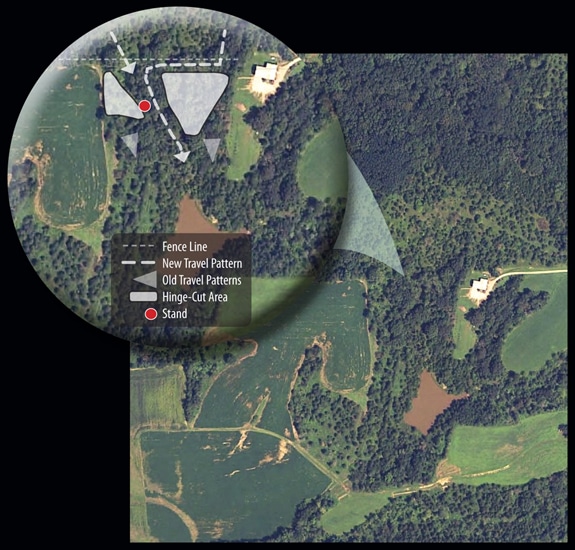