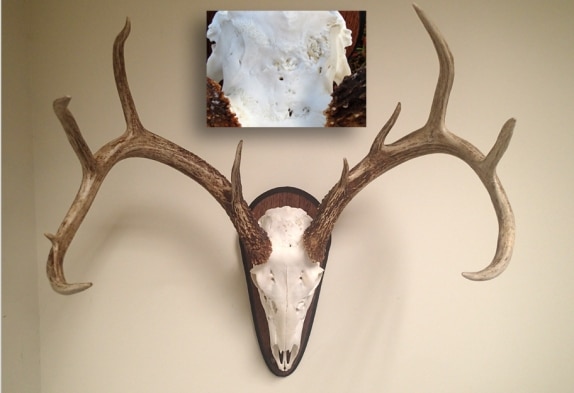 As a graduate student currently studying white-tailed deer at the University of Georgia Deer Lab, I am amazed at how many opportunities I get to learn something new from colleagues, coworkers and friends who are all interested in deer. You may remember from my previous articles that my graduate project involves looking at the effects of coyotes on fawns at the Joseph W. Jones Ecological Research Center, which is a private research facility in southwest Georgia. I am still in the not-so-exciting data analysis phase of my research, so to take a break I spent a great deal of time this past season deer hunting on the property as well as helping collect biological data and aging deer at our check station.

We had some impressive bucks come into the check station, and one in particular surprised me. This buck came in earlier in the season a bit before peak rut in southwest Georgia, weighing in at 240 pounds live weight, with an estimated age of 5 1/2 and a typical green score of 141 inches. The proud hunter who brought in this buck had just begun hunting this season and had decided to take on the task of turning it into a European mount. Upon creating the mount, he immediately noticed some unusual pitting around the skull. He asked our conservation wildlife biologist for advice, which raised the question of whether or not this buck had been suffering from a cranial abscess.

Although I knew that the majority of cranial and brain abscess cases in mature bucks result in non-typical antler growth and odd behavior (none of which this buck was exhibiting), I could not claim to be an expert on the topic. Therefore, I decided to enlist the help of Emily Belser and Bradley Cohen, who are also graduate researchers at the University of Georgia studying the prevalence and cause of cranial abscesses in deer. Upon hearing the facts and looking at the photographs I sent them (which you can see close-up by clicking on them in the Gallery below), this is what they had to say:

At one time, this buck surely had developed an abscess. Pitting of the skull is very characteristic of intracranial abscessation, or IA for short. Because he was exhibiting no outward signs of an abscess, and there was no pus at the site of the pitting, this buck probably had an abscess at one time in his life, but was able to recover from it. White-tailed deer are extremely tough and resilient animals.

Intracranial abscessation is just a fancy term for a bacterial infection of the head. The term encompasses any or all of the stages of the disease. A cranial abscess, or the first stage, is an infection that often develops around the antler pedicle, or base of the antler. The infection begins when bacteria (most often Trueperella pyogenes) invade a cut or abrasion that occurs from rut-related behavior, such as sparring or antler rubbing. These “risky” activities are probably why a buck is 7 times more likely to develop IA than a doe. The infection can heal at this point, or the infection may begin to erode bone and cause pitting in the skull, like the buck mentioned in this article. Still, the infection can heal, as was probably the case for our buck, or the infection can progress into the skull cavity. Once the infection breaks through the meninges, or the protective linings that surround the brain, the cranial abscess now becomes a brain abscess. The disease is surely fatal once it reaches this final stage. This stage is when a deer will exhibit odd behavior, such as walking in circles, paralysis, or losing fear of humans.

The prevalence of IA seems to vary by location or region. Our research is attempting to address the question of why this is so. After a survey of healthy, hunter-killed deer across the state of Georgia, we determined that there seems to be a “hot spot” of Trueperella pyogenes (the bacteria that causes these abscesses) in the western Piedmont and Upper Coastal Plain. There is a high prevalence of the bacteria in this “hot spot,” which just happens to coincide with a high prevalence of abscesses in the state. This suggests that areas with a high prevalence of the bacteria may also likely have a higher rate of IA. Additionally, there is speculation that areas with intensely managed deer herds or herds with high densities are more likely to witness this disease. Most likely, there are multiple factors that play into an individual deer’s risk of developing IA. Hopefully with the increasing awareness and interest in IA, we will be able to delve deeper into the science and understanding of this disease.

With the arrival of spring, I know we’re not the only ones who will soon be out in the woods looking for sheds and other possible remnants from this past deer season. If you find the remains of a dead buck, be sure to examine the skull closely. You may find clues to the cause of the this buck’s demise.