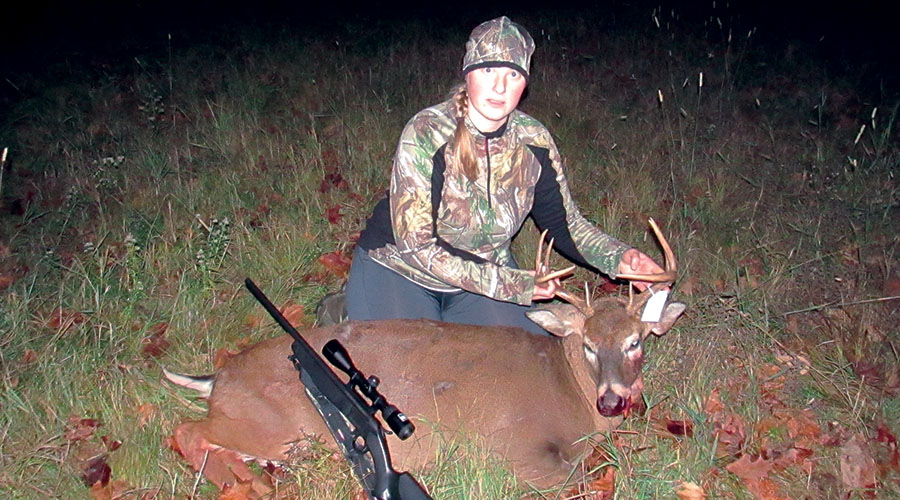 I found myself on a frosty January evening with a bowl of “buck tag soup.” You see, where I live, your hunting skill is judged by your ability to fill your buck tag – or so it seems. Some years no matter how hard you try, it just doesn’t come together. Like many soups, the ingredients may differ, but buck-tag soup always seems to taste the same: bitter and unpleasant. However, sometimes savory morsels of exciting memories and important lessons make the experience a bit more palatable. Join me as I recall the recipe for last year’s batch of soup.

I could have filled my buck tag several times, but I opted to let yearling bucks pass. This was a personal choice. Prior to last season, I talked with other hunters in the area, and most of them were on board with letting young bucks walk. In fact, most of them had been doing it for years, and there were several 2½- and 3½-year-old bucks known to be in the area. Unfortunately, sometimes passing yearling bucks means buck tags go unfilled.

Step 2 – Give your wife your best spot  during “peak chasing”

The result – a thunderous BANG! just before dark. My excited fingers couldn’t text “Was that you?” fast enough. It was her, alright, and the result was better than I had expected! It was her first buck, and it was the biggest one on our trail-cameras. A nice 2½-year-old 9-point! (seen in the photo above.)

I had $200 budgeted for stands last year. I decided to spend it on one good hanging stand that was comfortable, light, and mobile rather than buying several cheaper stands. It seemed like a good idea at the time, but when I started hunting I realized moving my stand around was too much disturbance for the area I was hunting. When I did want to put a stand in a new area, I found myself using my trusty climbing stand. Some hikes were just plain daunting, and although I love my climbing stand, it is not as stealthy as I would like it to be. Lesson learned. This year I’ll buy several less-expensive stands and invest in a good cushion, because those stands never seem to have good cushions.

Of the three stands I hung last year, none of them turned out to be as good as I had hoped. One was on an oak ridge. I thought it was going to be a dynamite spot during the archery season because it was in one of the few oak stands that had acorns this year. Unfortunately, it was located close to a trail that was frequently used by our neighbor for dirt biking. Of course, as luck would have it, their dirt-bike ride always seemed to occur during the last hour of daylight. They’re good neighbors who let us hunt their property and do some habitat work, so I won’t be filing a formal complaint, but I will be moving that stand.

The second stand was way too close to a bedding area. I busted deer nearly every time I tried to hunt it. On a positive note, the location was excellent for pre-season buck inventory with my trail-camera, so not all was lost. In fact, it was one of the spots where I photographed Amanda’s buck.

The final stand was located along a good summertime travel corridor with fair evening activity. However, as soon as hunters on neighboring properties started pressuring their feeding area, travel through that corridor was exclusively after dark. Total fail!

Step 5 – I forgot about the “Uncle Factor”

Hunting with family and friends can often present challenges for those who take deer hunting very seriously, especially when acreage is limited. My uncles don’t pay as much attention to the wind, or their entry and exit routes, and they sometimes hunt areas that I try to avoid until the right weather conditions prevail. At times, I think I might as well be hunting public land! That said, I love hunting with my uncles. They, along with my father, introduced me to deer hunting. Spending time with them in the deer woods is time I deeply cherish. Buck-tag soup isn’t nearly as bitter if one of the ingredients is hunting with family and friends.

Despite failing to fill my buck tag, I had a very rewarding deer season – perhaps one of the most enjoyable seasons to date. I helped my wife fill her first buck tag, and I hunted with my uncles for the first time in more than a decade! On top of that, I learned some valuable lessons. The freezer is not empty, though my wife will not let me forget who put the meat in there! Such are the woes of making buck tag soup. Bon appétit!