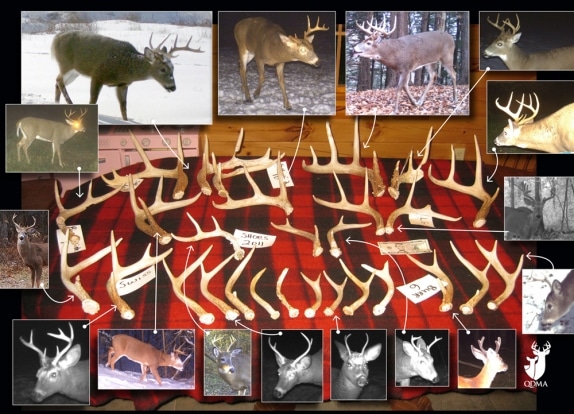 As your shed antler collection grows each spring, do this: Go back and try to match each shed you find to trail-camera photos in your collection from the previous fall. Do it for every antler, large or small. You’ll end up with a useful portrait of the local buck population like the one shown above, which can tell you a lot about your QDM progress.

The collection of sheds shown above was picked up from March to May 2014 on a 1,700-acre QDM Cooperative in New York that includes five hunting properties.

“It’s awesome to compare sheds to trail-camera pictures to identify individual deer,” one of the hunters told me. “It builds the storyline. You put your hands on him and know that he’s still out there, and now you have a history if you end up killing one of these deer.”

You have a lot more than that. You also gain these things:

A guide to your most huntable bucks. If you captured him on camera in fall and found his shed antler in spring, it’s likely this buck’s home range overlaps your hunting property to some extent. He wasn’t just passing through on a rare excursion or out on the fringes of his range when you photographed him or when he dropped the antler (The more photos you have of him in different locations, the more likely your hunting land includes his core area). These are the bucks you can follow, pattern and hunt throughout their lives, as long as you don’t educate them to the pursuit.

A picture of your buck age structure, from bottom to top. If you make age estimates based on the photos and use them to sort the shed antlers, you’ll reveal the layers of buck age. Usually, it’s a pyramid. Yearling bucks will be most common, 2½-year-olds a little less common, and so on. If you began protecting young bucks only recently, it may take a while before there are any 3½-, 4½- or 5½-year-old bucks in your pyramid. Even if you don’t kill them, the oldest bucks will always be less numerous than younger deer because there are plenty of other causes of death besides your arrows and bullets, but that won’t stop you from increasing the numbers of bucks in each level of your pyramid over time.

A sense of antler quality by age class. Once you sort by age based on evaluating trail-camera photos of these bucks, pay attention to tine length, beam length, and beam circumference. You may be able to determine average statistics for bucks by age, which will sharpen your field aging abilities. There can be a lot of overlap between age classes in a single measurement like beam circumference, and body characteristics are always best for estimating age, but studying a combination of mass, beam length and tine length can give you a better understanding of what local bucks can produce at different ages.

A look at individual buck survival. Who made it through hunting season? While you might whoop and holler upon finding the shed of that huge mature buck you’ve been hunting, confirming that he survived hunting season, it’s more important to look at survival of yearling bucks. If most of them made it, your efforts to build buck age structure are paying off, and you will notice it through increasing numbers of rubs and scrapes, intensified rut activity, more exciting days in the fall woods – and more of those mature bucks for you to see and hunt.

Confirmation of QDM progress. If anyone in your hunting group or Cooperative has their doubts, a pyramid like the one above provides reassurance that some bucks are making it through to older ages. The shed antler makes it clear he’s still in the area, and the location where it fell may even provide additional clues to his home range.

A dose of reality. Bucks in photos often appear larger than they really are (just as they sometimes do in rifle scopes!) Holding the actual antler in your hand while reviewing your trail-camera photos of the buck can help you dial-in your eye for antler and body size on local bucks. You can also double-check your score estimates based on the photo by measuring the actual bone.

And, of course, fun! As you match sheds to photos, you build your connection to the story of each buck, and you build a picture of the larger story of QDM success. It’s a fun process that enhances your year-round connection to deer hunting. Tracking the histories of specific bucks can be almost as much fun as watching them approach your stand during hunting season. Almost.

Some thought should also be given to the misfits: the photographed bucks whose sheds are never located, or the sheds you find from bucks you never photographed. These deer likely have ranges that barely overlap your hunting land or overlap it only during certain seasons. A misfit shed may even give you clues to a new camera location you should try, just to see who is hanging out back there.

Pile the sheds you find this spring then go back and play “match game” with your photo collection. You’ll gain new insights into your QDM progress and buck age structure while dialing your focus down to the bucks you have the best chance of seeing from a stand this fall.

Want to sharpen your skills at aging bucks in trail-cam photos? In every issue of Quality Whitetails, “Age This!” features three bucks submitted by QDMA members and aged by a panel of five experts, including their commentary on how they arrived at their estimates. To start receiving Quality Whitetails, join QDMA today!