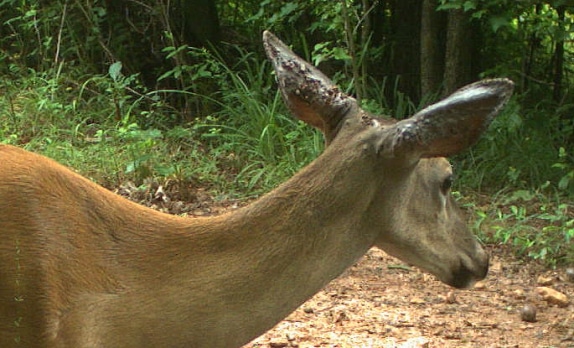 I start itching as soon as I begin reviewing trail-camera images taken this summer at QDMA Headquarters. Deer at this suburban Georgia site are seething with ticks. Look at the ears of the poor doe in the photo above. Bucks are covered too, and many of them have ticks latched onto their growing antlers.

I’ve been wondering what I can do to reduce tick abundance before they have a chance to latch onto me or the deer. Like any red-blooded American boy who is considering what to do with a problematic insect, my first thought was: FIRE. Wouldn’t prescribed fire greatly reduce tick abundance by literally incinerating larval and adult ticks in the leaf litter and understory vegetation? Fire has great benefits for deer and other wildlife; wouldn’t it be great to know you are barbecuing a lot of disease-carrying parasites at the same time?

QDMA Headquarters is located on the outskirts of Athens, Ga., in a mixed commercial and residential area. Prescribed fire vanished from the remaining woodlands in this area a long time ago. Knowing fire has not visited this landscape in a long time, I wondered if that might partially explain the high tick populations. High deer density is the other explanation, as deer are an important host in the life-cycles of most tick species, including the one that transmits Lyme Disease, the blacklegged tick.

I started digging to see what kind of research I could find on this question. Here’s what I learned:

A five-year study on Oconee WMA in Georgia, not far from QDMA Headquarters, compared Lone Star tick abundance in regularly burned areas with those in unburned woodlands. They found annual fire reduced abundance of various stages of the tick life-cycle (larvae, nymph and adult) from 70 (adults) to 80 percent (larvae). Test sites burned every other year reduced abundance from 48 (larvae) to 73 percent (nymphs). However, on these biennially burned sites, tick abundance completely rebounded in the year without fire, sometimes even exceeding tick abundance on “control” sites that were never burned. The researchers didn’t offer an explanation for why, but we’ll come back to that. (Researchers included William R. Davidson, Debra A. Siefken and Lynn H. Creedmore of the University of Georgia).

Researchers studied blacklegged tick abundance following fires on two separate tracts of Cockaponset State Forest in Connecticut (the blacklegged tick is the vector of Lyme Disease). An April fire was rated a “light to moderate” burn, and tick abundance was reduced at that site by 75 percent. A May fire was rated “moderate to severe,” and tick abundance was reduced by 97 percent! However, the researchers said this: “Judging by the comparative abundance of adult [ticks] in the fall at the burned and unburned woodlands, the effect of the burns was temporary.” (Researchers included Kirby C. Stafford III, Jeffrey S. Ward, and Louis A. Magnarelli of the Connecticut Agricultural Experiment Station).

Other studies I found mirrored these results: Fire reduced tick abundance, but not for long.

Then I found this…

Brian F. Allan of Washington University in St. Louis, Missouri, studied the effect of fire on abundance of the Lone Star tick in the Missouri Ozarks. He concurrently studied the effect of the same fires on deer density. He found tick abundance dropped immediately following a fire but then rebounded rapidly. In fact, he found tick populations became higher in the burned areas two years post-burn than in areas that were not burned at all – more than six times higher! His explanation came from his deer-density data. Deer density swelled in the burned areas as deer moved in to take advantage of food and cover enhanced by fire. The highest deer densities he recorded occurred in burned areas during the first year post-burn. As deer moved back into these newly burned areas, they brought hitch-hiking adult ticks that later dropped off and laid their eggs. With high numbers of deer attracted by forage and browse, ticks rapidly repopulated and even saturated the newly burned areas, to the point that tick populations exceeded the outer regions.

Ticks are rare on this land. I now believe that’s a result of regular and widespread use of fire, habitat improvements, and maintaining the right deer density for our region – all part of our QDM program.

So, fire can certainly reduce tick abundance, but it seems the parasites will quickly rebound…

…deer density across the region is high, allowing more rapid repopulation of ticks through easily available hosts and increased deer traffic from unburned into burned regions.

…habitat quality on unburned neighboring land is low, because this will enhance the attractiveness of the burned areas to deer, increasing movements into the newly burned areas.

I’m now afraid any effort to reduce tick populations at QDMA Headquarters would be futile. The 23-acre site is surrounded by hundreds of acres of woodlands that will likely never again be lit on fire intentionally. Also, deer density in this suburban area is very high.

However, I’m more encouraged for my family’s hunting land in another region of Georgia. We’ve used fire regularly on nearly 200 acres for many years, our deer density is moderate to light, and habitat quality is high across the landscape, even on the areas we don’t burn. Ticks are rare on this land, and we seldom find them on us or on the deer. I now believe that’s a result of regular and widespread use of fire, habitat improvements, and maintaining the right deer density for our region – all part of our QDM program.

I can sum it all up now – Quality Deer Management is bad for ticks!