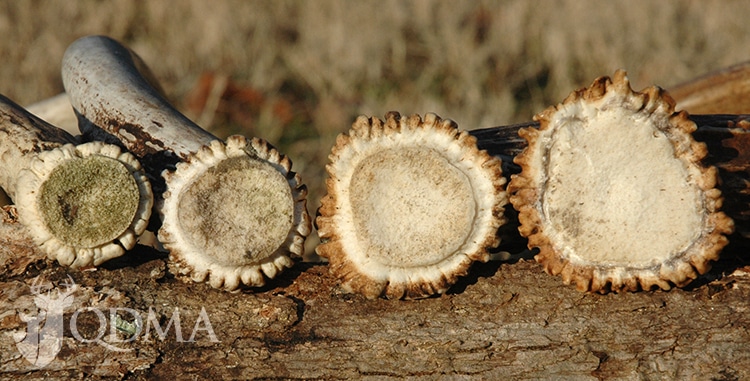 Don’t you love that little thrill, that tiny psychological jolt you get when you first spot a shed antler? Especially a big one – but a very small one is exciting, too, simply because you are so much less likely to see it. Large or small, as the thrill subsides and I look at the shed in my hand, my mind starts working. Why was this buck in this place when he dropped this antler? Where is he now? And, of course, how old is he?

Can you reliably estimate the age of the buck that dropped that shed antler you’re holding?

This is something I’ve often wondered, so I went looking for an answer. I knew I’d need to find a large, high-quality data set of antler measurements combined with estimated ages of the bucks that grew them. Dan Bergeron, deer project leader with the New Hampshire Fish & Game Department (NHFGD), shared one with me. It included antler beam diameters measured near the base for more than 5,000 bucks collected from 2007 through 2016 by NHFGD biologists at check stations. I converted diameter to circumference so the numbers would equate to something hunters are familiar with: Boone & Crockett “mass” measured at the base, also known as the “H-1” measurement in B&C talk.

Here is the average base circumference by age class for the New Hampshire bucks in the data set: 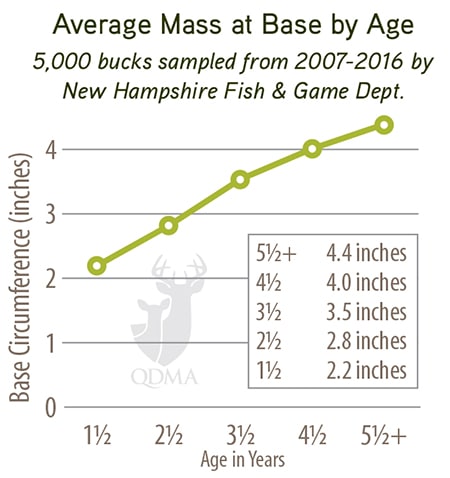 So, in New Hampshire at least, can you assume that a shed antler with 2.2-inch mass at the base is a yearling?

First, a word about “overlap.” Antler scores by age class form a bell-shaped curve on a graph. That means that for any age class, there’s a common average, but there are also uncommon bucks with below- and above-average antlers for their age. Overlap is when above-average bucks in a younger age class have the same antler size as below-average bucks in older age classes. Overlap is what makes it tough to estimate age using only antlers. And when it comes to antler mass among New Hampshire bucks, there is some serious overlap!

For example, if you pick up a shed antler in New Hampshire that has a 3-inch base, it could potentially be any age you can name! NHFGD found some above-average yearlings with 3-inch bases, and it found some below-average 5½-plus bucks with 3-inch bases. The entire range of mass measurements for yearlings went from 1 to 3.7 inches. The entire range for bucks of 5½-plus went from 2.6 to 5.7 inches. You can’t even say that the most massive shed in a New Hampshire collection is 5½-plus, because the maximum range of 5.7 inches was shared by bucks that were estimated to be 3½ and 4½ as well.

Overlap is why QDMA emphasizes the danger of trying to age bucks by looking at their antler size, especially when you are evaluating those antlers through a rifle scope or peep sight.

Well, what can you say about the mass of a New Hampshire shed antler? Based on Dan’s data, you can make these concrete statements:

Anything smaller than 2.3 inches at the base is either a yearling or a 2½-year-old. Anything 3.7 inches or larger is 2½-plus.

That’s not a lot of help. Overlap kills you here. But remember that a mass measurement is one of the smallest measurements you can take on an antler. Is overlap just as bad on something much bigger, like a beam measurement?

To find out, I contacted Dr. Dave Hewitt, Director of the Caesar Kleberg Wildlife Research Institute at Texas A&M-Kingsville. This institute has collected some of the largest sets of data on known-age bucks and their antler size anywhere in North America. Dave sent me the average antler measurements by age calculated from more than 1,000 bucks collected by the East Foundation across four sites in South Texas.

Here is the average beam length by age class for South Texas bucks: 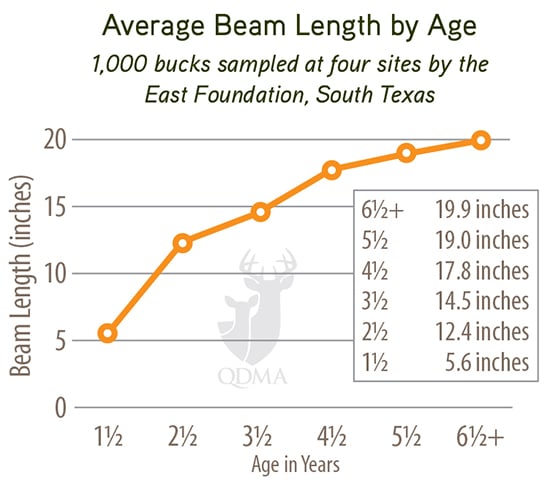 Now this looks like something we can work with. Right? At least the differences in the averages are much wider, with the average beam length of a yearling being over 6 inches shorter than a 2½-year-old. But again, as you can see in the chart, the differences quickly get smaller as a buck gets older.

Dave’s data didn’t include every individual and I couldn’t see the actual overlap, so I just asked him: Considering overlap, can you reliably estimate the age of a South Texas shed antler based on beam length?

“Although antler size is related strongly to age, after about 3½, variation within an age class swamps any changes in antler characteristics from one age to the next,” said Dave. “So, I do not think it is possible to make a reliable age estimate from shed antlers. You could assign each animal to a ‘probable’ age, but the accuracy of such assignments would be low for deer 3½ years old and older.”

Dave went on to explain that there’s even some overlap from 1½ to 2½ in beam length, so while you might have greater success sorting these two ages apart, you wouldn’t achieve 100 percent accuracy.

But wait, there’s still a great lesson here. Overlap is why QDMA emphasizes the danger of trying to age bucks by looking at their antler size, especially when you are evaluating those antlers through a rifle scope or peep sight. As we teach, body characteristics are the most reliable clues to age. So, this is what I recommend you do with shed antlers:

First, if you don’t already recognize this antler from a buck that is familiar to you, go ahead and attempt to use it to estimate age. Then, set that shed antler close by while you scroll back through your trail-camera images and see if you can find a full-body, broadside photo of the buck that once carried it. If you can, combine the more reliable body characteristics with the dimensions of the shed and produce a more reliable estimate of this buck’s age.

Despite overlap, it’s still a good idea to collect antler measurements like mass and beam length from every buck you kill, and match those numbers with the buck’s estimated age based on tooth wear and replacement. Knowing the average antler dimensions by age of bucks where you hunt will help you track improvements in those averages as your herd and habitat management efforts move them higher. It’s also a helpful strategy to match shed antlers to bucks in your trail-camera photos.

Before you go, here’s a trivia question based on the data I examined. You know that bucks in different regions of the country have varying antler potential. In which location do you think the average mass measurement of a buck is bigger – New Hampshire or South Texas?

Take a guess, then look at this chart and see if you were right: 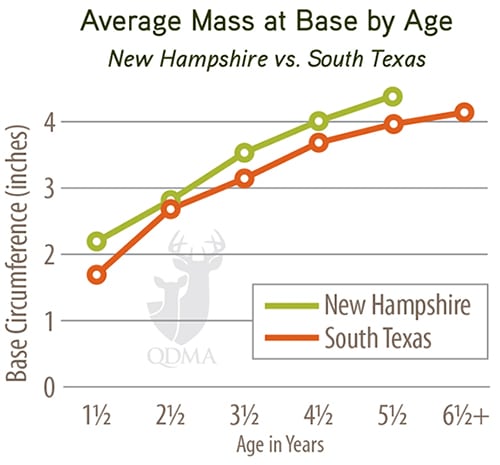