How to Detect and Report EHD in DeerEHD is already striking. Are you keeping an eye out for deer hit by the virus? Our video explains how to look for an outbreak where you hunt and what to do if you find sick or dead deer.

Posted by The Quality Deer Management Association on Tuesday, August 22, 2017

Hemorrhagic disease (HD) hit whitetails extremely hard in 2012, the latest in a recent string of notable years for outbreaks. The disease (mostly strains of a virus known as epizootic hemorrhagic disease or EHD, but which also includes the closely related bluetongue virus) is striking areas that were previously unaffected, or rarely affected. In these areas it is having its worst impact, because whitetails have less history with the disease and therefore less acquired resistance to the viruses.

Wherever the virus strikes, the losses have hunters asking: What can we do to prevent EHD? I talked to an expert about a factor that is probably more well known than any other: the insect that spreads the virus. What I learned could help deer hunters reduce the risk or severity of EHD and bluetongue outbreaks. 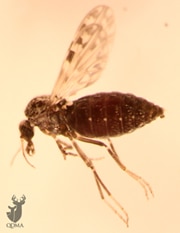 EHD and bluetongue are spread in cattle, deer and other ruminants by several species of a tiny flying insect in the genus Culicoides. Call it a gnat, a midge, a no-see-um, or any other local name, this is the tiny fly with the big bite. Three species are the primary vectors, or transmitters, of HD viruses, but one of them is considered the most significant vector and the one we know the most about: Culicoides sonorensis.

Now retired, Ed Schmidtmann spent most of his career as a researcher with the Arthropod-Borne Animal Diseases Research Unit, part of the USDA Agricultural Research Service. Ed studied insects and ticks that transmit diseases, and sonorensis was one of his special interests. If there is a way to reduce midge numbers and thus reduce the spread of HD, it relates to their breeding habitat: the shallow margins of ponds.

The worm-like larvae of all Culicoides species are tiny – about 2 to 4mm long (the height of a capital letter in the text you are reading right now). After hatching from eggs, the larvae live in submerged mud at the very edge of shallow standing waters. They are found in water less than 2 inches deep. The ideal water is warm, sunlit, high in organic matter, high in nutrients and low in oxygen (“eutrophic” is the scientific term for this low-quality water). Disturbed mud is also ideal. Thus, perfect conditions for midge reproduction are created in the typical cattle pond, where cattle disturb and disrupt the shallow margin of the water and prevent plant growth while also defecating and urinating in the water, increasing eutrophication.

“If I wanted to find the larvae of this insect, I’d look in a cattle pond,” said Ed. “Captive deer create the same kind of situation, it isn’t just cattle.”

Because larvae live in sediments at the water’s edge, and are not open-water creatures like mosquito larvae, they have few aquatic predators.

“One thing that makes this insect very adaptable is its tolerance of salts,” said Ed, “and that seems to be a key feature of the habitat because it allows the insect to live in a pure culture without other insect competitors.”

Salt levels are often high in cattle ponds due to salts fed to the cattle or leached into the standing water from feedlot runoff. These salts kill off other insect populations, reducing the midge’s competitors and giving the midge abundant breeding space.

Once larvae mature, they leave the water and morph into winged adults. Only the females feed on blood. The females are crepuscular – most active at dawn and dusk – just like deer.

Females convert the protein in their blood meals into egg production. When they feed on deer, the viruses they are carrying can be transmitted to deer, or from the deer to the midge. Females lay their eggs in the soil at the edge of a suitable body of water, the eggs hatch into larvae, and the cycle continues.

Why do outbreaks of HD tend to be worse in abnormally hot, dry summers? As water holes dry up during drought, organic material, other contaminants and salts become even more concentrated in the remaining water, which is also likely warmer and shallower. Thus, conditions for midge reproduction are further enhanced.

Heat and drought also increase water consumption in cattle and deer (and feral hogs if you have those), so they are drawn more often to a dwindling supply of water holes to quench their thirst and cool off, increasing edge disturbance and the amount of animal waste and urine excreted directly into the water – again enhancing midge breeding conditions. Deer are usually able to get most of the water they need from succulent forage, but forage quantity and moisture content shrinks during summer droughts. As thirsty deer concentrate around limited water sources, where midge reproduction is in high output, contact between feeding midges and deer is even more frequent.

Extended periods of peak summer heat also mean extended breeding seasons for the midge. Female midges are not limited to one egg-laying cycle and can continue producing and laying eggs (in cycles every three to five days, according to Ed) until they die or are killed by the onset of cold weather. Meanwhile their offspring from earlier egg-laying cycles are joining the adult population. Thus, midge abundance builds exponentially as warm weather endures in late summer.

Wait, there’s more. According to Ed, warm weather also increases the rate of virus growth inside the body of an infected female midge. As warm weather is prolonged, and the female midge enjoys a longer lifespan than they would in cooler summers, the virus count builds, increasing the likelihood the virus will be transmitted each time the midge bites a deer.

Many deer managers have constructed small water holes for deer as part of an effort to create complete wildlife habitat that helps attract and hold deer. If you are one of them, you may be thinking about that water hole right now and wondering: Is it actually a danger to deer?

What You Can Do?

If you’ve already constructed a deer watering hole and it sounds like the ideal midge breeding grounds I’ve described here – shallow, murky, warm, exposed to direct sunlight, with a muddy or silty bank that is regularly disturbed in summer by cattle, deer or feral hogs – consider ways you may be able to alter the water source, or the ways animals use it, to avoid enhancing midge reproduction.

According to Ed, midge reproduction is minimal in clean, clear, deep bodies of water, or where banks are vegetated or rocky (rather than muddy) or where the bank is steep. If you create water holes, try to construct them to produce healthy, vegetated wetlands rather than shallow mud holes, or shape them in a way that reduces midge breeding habitat during dry conditions. Locate them in shade to keep water temperatures cooler in summer.

“Create a stable ecology in this wetland habitat,” said Ed. “Encourage vegetation to grow, and design steeper margins for the pond.”

View a photo gallery of tips for creating small, healthy wetlands for whitetails.

If you provide salt or mineral supplements for deer, do not place them in a location that allows them to leach into nearby standing water.

Unfortunately, many of the factors in play will be out of your control. If cattle operations and ponds are abundant nearby, and you don’t have control over management of the ponds or the cattle, you may be fighting an uphill battle. If you own the cattle, try to find an alternative water supply and fence them out of small farm ponds during summer.

Streams are another factor that may be out of your control. During dry spells, small streams may recede into strings of shallow pools that offer breeding grounds for midges.

Nevertheless, Ed said that taking steps to improve the quality and health of small bodies of water on your hunting land may help.

“Even if you’re only managing 100 acres, if you decrease the availability of breeding habitat through management, it might have an effect on virus transmission,” said Ed.

Dr. Dave Stallknecht, a researcher at the Southeastern Cooperative Wildlife Disease Study (SCWDS) at the University of Georgia, agrees with Ed that deer managers may be able to lower their HD risks by manipulating water supplies on their land.

“If it was a gamble, I’d take it,” said Dave. “It’s like everything else with managing deer: If your neighbors aren’t doing the same things, you may have limited success. But there’s no sense in making trouble for yourself by offering the kinds of places these insects use to reproduce.”

Study the quality of standing water sources where you hunt. It may be that maintaining healthy, abundant deer populations despite HD requires us to offer not just any hole that holds water, but healthy wetlands that are good for more wildlife than just thirsty deer.

Did You Know? QDMA and its volunteer Branches have focused educational efforts in EHD and CWD (chronic wasting disease) outbreak areas, QDMA has advocated for wise disease-management policy at the state and federal level, and QDMA has directed funding toward research into diseases that threaten deer herds. Support QDMA in these and many other efforts to protect deer hunting by joining today!