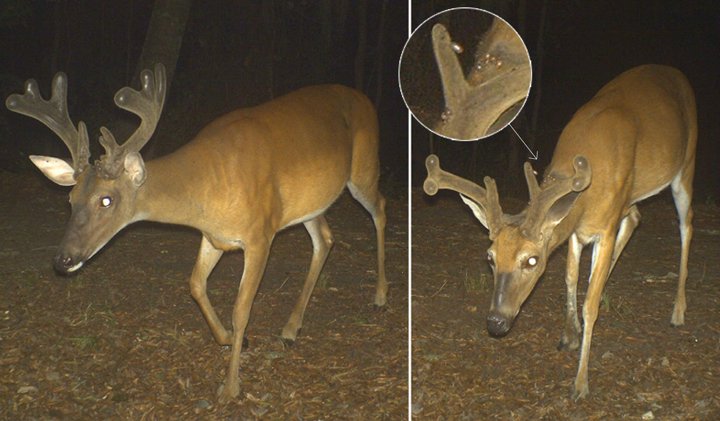 Recently someone asked me if ticks had been known to affect antler development, and then I captured the pair of photos above on my trail-camera. That prompted me to give this question more thought.

The relative number of parasites on a deer is referred to as a “burden” by scientists. In at least one scientific study, high “burdens” of ticks were associated with fawn mortality, so no doubt there is a relationship between parasite burdens and deer health. While we don’t know for sure if ticks can directly affect antler development, a high tick burden could result from or cause poor health, which certainly affects antler development.

Look closely at the buck on the right and the number of engorged ticks attached to the antlers. Also, see the cluster of ticks in the buck’s neck/shoulder region. Obviously this buck is not completely healthy, and I think there is some kind of issue with his right front leg/foot, which could be the cause. Now study the larger buck on the left, photographed at this same location at around the same time. He has perfectly clean antlers – no ticks visible. When two animals from the same habitat exhibit different external parasite burdens, you can bet that one is healthy and the other is not.

Parasite burdens in free-roaming deer are rarely a concern for deer managers, as long as most of the deer you see or photograph appear healthy – like the buck on the left.