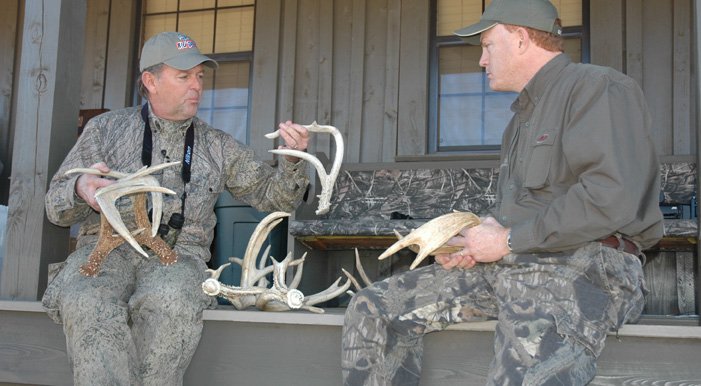 The power of selectively controlled breeding is incredible. With it, we transformed a wolf into a chihuahua over the course of 15,000 years – mere milliseconds in the echoing depths of geologic time. We transformed a seedy grass named maize into a crop that contributes to almost everything you eat. There are many other examples, but in every case the key word is “control.” No amount of selective killing of free-roaming wolves could ever produce a chihuahua, a Labrador retriever, or a border collie. But take the plant or animal and remove it from the wild, control who breeds who for a few generations, and change can be rapid.

Hunters of free-ranging whitetails cannot manage genetics through selective harvest and produce measurable genetic change. Period. Since we can’t control breeding in free-ranging deer, we can’t shape genetics. But put the deer in a pen and explicitly control who breeds who for several generations and, yes, results will be measurable, and they can be quite amazing. Because of this fact, many hunters assume the same can be done in the wild.

Hunters are hard-headed (I know because I’m a hunter). But I am bound and determined to be there when the last deer hunter gives up on the idea that a trigger-pull can change the gene pool. To help speed that day, here are eight sound reasons why we can’t manage genetics in free-ranging whitetails.

You Can’t See Genetics to Start With

Many hunters think various forms of antlers represent genetic traits, but most of the abnormalities we see are injury-related, especially abnormalities that only appear on one side of the rack. As far as antler dimensions such as tine length and mass, the factors of age and nutrition are also on display. I’ve heard hunters claim a buck had “inferior genetics” when in fact it was just a yearling with average antlers for its age. I’ve seen hunters want to “cull” small-antlered bucks in populations where nutrition is low, deer density is high, and the sex ratio is out of balance. In these populations, some bucks are born late (because of the skewed sex ratio) and they survive on below-average nutrition for the rest of their lives, a recipe for underperformance. The last thing you want to do in a population like this is take more bucks out.

Since we can’t accurately identify genetic traits with a brief glance in the wild or by looking at a trail-camera photo, we can’t reliably select for them with a trigger-pull. But even if there was such a thing as “inferior genetics” and you could see it by just looking at a deer, you could not affect its prevalence in the population, not even by killing deer that are carriers. All of the following facts explain why.

Most Yearling Bucks Disperse From Their Birth Range

They do this usually just before their second fall. They have been known to travel over 40 miles in this one-time dispersal movement (with an average of 1 to 5 miles), after which they almost always set up a permanent home range.

Think about the beauty of this behavior. Research suggests doe fawns tend to be home-bodies and live pretty much in the range where they were born. If buck fawns did this too, over time the same genetics would pile up in one area, leading to inbreeding. Yearling-buck dispersal is one mechanism that ensures the genetic river never becomes a stagnant pond but is constantly churning and flowing. Any effort by hunters to direct the flow at the property level will be easily overwhelmed by a constant stream of outside genetics.

Adult Bucks Leave Their Home Range During the Rut

They make what are known to researchers as rut-related “excursions.” They have been known to travel several miles to a particular spot, spend a few hours, and return home. It would appear the point of the excursion is to rendezvous with an estrus doe. If that is true, then this is one more mechanism that contributes to genetic mixing across properties and even larger areas. Like yearling-buck dispersal, rut-related buck movements drill holes in a hunter’s imagined ability to control genetics.

Does Carry Genes Too

It’s a fallacy that any deer or deer population has an “antler-gene problem” that we should worry about, but if it did, some does would carry it too, and a hunter would have no way of sorting them out and removing them. Interestingly, like bucks, does also make rut-related excursions, which further diminishes any hope of controlling genetics.

Most of the hunters who claim to be improving genetics through harvest choices are doing so to presumably increase the prevalence of high-scoring antlers. They’re looking at a middle-aged deer and deciding he doesn’t have much potential, so they hammer him so he “won’t breed.” Too late. Research shows he probably started breeding as a yearling, shortly after his arrival in the area via dispersal.

Though there is a “rut peak” when the bulk of the breeding takes place, conception dates always form a bell curve on a graph… meaning that a few does come into estrus and are bred well before and well after the peak. Most modern firearms seasons don’t open until close to the peak of the rut, and by that time a fair number of does are already bred. Many times breeding even starts before early archery seasons. The hunter who plans to control breeding with a trigger-pull can’t even begin doing so legally until after (sometimes well after) breeding has begun each fall.

You Don’t Have Time

If you’re going to shape deer genetics in the wild, part of maintaining control over the genetics is ensuring that every individual buck out there passes through your selective screening process, whatever your criteria might be. I’ve already shown that a lot of breeding takes place before bucks are old enough for you to accurately judge their antler potential, and before you can even legally shoot them each season. Once the season comes in, even if you have help from hunting partners, plenty of bucks that are breeding won’t be seen by you during legal hunting hours and seasons. After all, you have to make an appearance at work and stop by to visit your family every now and then.

It would be impossible for you to achieve the intensity of selective harvest necessary to make measurable changes in genetics across a large region, and even if you could, you would have to keep it up forever. Once breeding control ends, highly selected breeds quickly fall back to a default position. When a hog farmer’s Chester Whites escape into the woods, they revert to black, long-haired, long-nosed, long-toothed feral hogs in a relatively short time. If humans stopped controlling the breeding of pedigreed dogs and let them run loose in the streets, they would unravel back into street mutts in a few generations. If you took the most prized breeder buck from his comfortable pen and turned him out among free-ranging whitetails, he would have no measurable impact on antler size in the region, even if he survived to successfully breed. The expression of that genetic potential could only go as far as local resources allowed (soil quality, habitat quality, herd demographics, hunter management choices). Eventually, his genes would be diluted and swamped by local gene flow.

What Can You Do?

The fact is, deer don’t have “antler-gene problems” to start with, so it’s kind of silly to explain all the reasons why we can’t manage something that doesn’t exist.

But bucks do have real problems of other kinds that affect antler growth. They often don’t get adequate nutrition in every season. They often are born late because of skewed sex ratios, so they get a delayed start on physical development from the very beginning. They often fall to hunters as yearlings. These are factors we can usually control, with great results. We can:

You can’t see or manage genetics, and it’s not a problem anyway, so don’t waste another minute worrying about it. Instead, invest your time in methods that are proven to get measurable results.