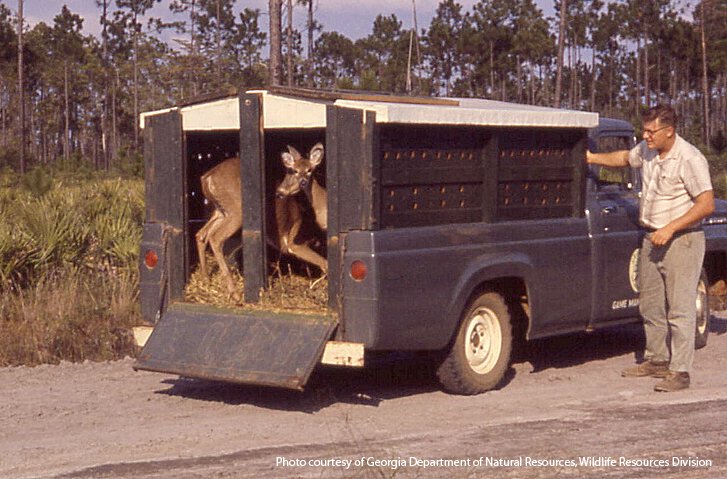 “We’ve got big whitetails because this area was restocked with deer from Wisconsin.”

I wish I had a dollar for every time I’ve heard a statement like this one, and if you hunt in the South like I do, you’ve heard it too. There’s probably no genetic connection whatsoever between Wisconsin stockers and present-day deer, but facts rarely get in the way of a good story.

That’s right, I said there’s probably little or no genetic connection between Wisconsin deer stocked decades ago in the South and the deer that exist at those sites today. That statement will shock some people, so let me introduce you to the DNA research that supports my argument.

In the mid 1900s, whitetails were restored to much of their former American range through restocking efforts. According to restocking records, most of the deer did not cross state lines: The majority were captured and moved from one area to another within a single state. However, out-of-state transfers occurred as well, and Wisconsin was the leading donor, especially in the South. For example, Wisconsin donated 309 deer to Arkansas, 616 to Florida, 439 to Georgia, 300 to Kentucky, 363 to Louisiana, 358 to Mississippi, 167 to North Carolina, 662 to Tennessee, 369 to Virginia, and 447 to West Virginia. These deer weren’t dumped in one location in each state but scattered out in small stockings in several locations over time (the counties of the stockings, and numbers of deer, are listed for each state in A History of White-Tailed Deer Restocking in the U.S.).

Restocking was huge news among hunters in these states at the time, and many older hunters still fondly recall the first deer track they saw in their area as deer populations recovered. Word spread among hunters about local stockings, especially if the deer came from Wisconsin, and those stories passed into legend. Decades later, hunters still refer to those old stocking events with reverence and as a way of explaining big whitetails killed today.

To believe there is a genetic connection spanning 50 years or more, you first have to assume the Wisconsin deer survived and thrived. Then you have to assume they dominated reproduction in the local area despite competition from other genetic strains of deer. Most hunters don’t realize there was a lot of competition.

Records clearly reveal that the majority of stocked deer came from in-state sites where deer had managed to hold on in sustainable numbers. For example, Tennessee got 662 deer from Wisconsin but trapped and transferred 7,679 deer within its own borders. Georgia got 439 from Wisconsin but moved 2,204 within the state. Kentucky: 300 vs. 8,710. Arkansas: 309 vs. 2,702. North Carolina: 167 vs. 3,319. And so on. Every single southern state accomplished restocking by relying far more on deer from within its own boundaries than on deer from out of state. In most cases, deer from both in-state and out-of-state sources were released in the same counties.

To find out if those Wisconsin deer survived, thrived, competed, produced offspring, and left genetic traces still visible in today’s deer, you’d need to study whitetail DNA. Researchers did that.

Collaborators from Mississippi State and Texas A&M Universities, as well as the Samuel Roberts Noble Foundation in Oklahoma, studied the DNA of hundreds of deer harvested by hunters at 16 different locations scattered all over the state of Mississippi (which historically, by the way, received 358 deer from Wisconsin and moved 2,491 deer within its own borders).

They found that the 16 deer populations could be separated into two distinct genetic groups.

One of these groups was genetically similar to deer from the Leaf River Refuge in southeast Mississippi – which had been one source of live deer restocked throughout the state. Leaf River itself had previously been restocked with whitetails from Mexico before it served as a source of deer for additional restocking efforts in other areas of the state.

The other distinct group was genetically similar to deer at sites in Mississippi where whitetails had never been wiped out – in other words, native Mississippi deer.

The researchers did not find a single population that was genetically similar to the Wisconsin stocking source, despite the fact that more than 350 deer were brought from Wisconsin during the restocking era and released at sites in Mississippi.

Why did Wisconsin genetics fade out while deer from Leaf River Refuge (with Mexican whitetail genetics) and from other sites within Mississippi dominated? Dr. Randy DeYoung, a doctoral candidate at Mississippi State University when he conducted the study and now a professor at Texas A&M-Kingsville, offered these thoughts in a 2004 Quality Whitetails article:

“One reason may be that northern deer are known to be more highly susceptible than southern deer to some diseases, such as hemorrhagic disease. The Wisconsin deer and their offspring may have died out before they could influence the genetic makeup of local populations. Or it may be that big-bodied Yankee deer wearing heavy fur coats just didn’t fare as well as their smaller southern cousins in steamy Mississippi.

“Whatever the reason,” Randy said, “time seems to have erased any contribution the Wisconsin deer may have made.”

While this study only looked at Mississippi, I believe it’s likely such studies would find the same thing in other southern states. Throughout the South, the recipe was the same: a handful of Wisconsin whitetails sprinkled in with much larger numbers of deer that were native to the state or at least to the South. These “local” deer were much better equipped and adapted to survive and thrive after the move.

Hunters who believe they see Wisconsin deer today in the beds of Southern pickup trucks are making the assumption that any deer shipped in from an exotic location and turned loose will not only survive but reproduce, and that over time those genes will thrive and compete with genes from locally adapted deer. Considering the Mississippi study, this is a leap we just can’t make.

So, how do we explain those outstanding bucks in pickup beds? They are as much or more a product of quality year-round nutrition and age. Wherever your local deer genetics came from, you can’t change them. But you can change nutrition and age through Quality Deer Management: increase numbers of mature bucks by protecting young ones, balance the sex ratio, and provide quality nutrition year-round through sound habitat management techniques. Then you can say:

“We’ve got big whitetails in this area because we produce them on our own through Quality Deer Management.”