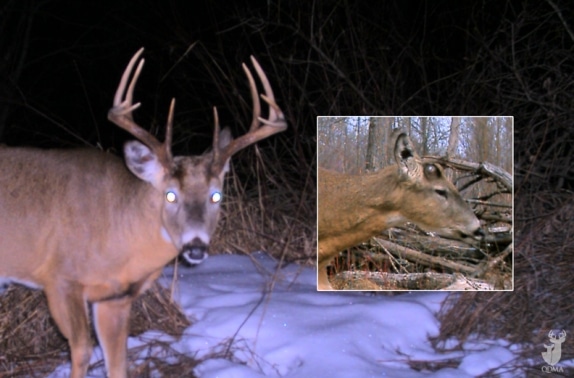 Every year starting in December, QDMA begins to receive sporadic reports of bucks dropping their antlers earlier than normal. These reports seem to be more common in some years, or more concentrated in specific regions, and sometimes hunting season is still open when these reports occur. It’s unpleasant to think you might mistake an early shedding buck for a doe and shoot him while trying to meet your target doe harvest; this is another great reason to fill your doe quota early in the season.

What are the causes of early antler shedding? Before we look at potential factors, it helps to be familiar with the normal antler cycle.

Antler growth, mineralization, and casting (dropping antlers) is largely controlled by hormones and regulated by photoperiod (the amount of light per day). Much has been written on this subject, and you can find detailed accounts of the complex interactions between the pineal and pituitary glands, testes, and the hormone cocktails involved in the process. In brief, antlers generally grow during spring and summer and mineralize in August and September in response to increasing testosterone levels. Testosterone levels begin increasing in July, peak in late October to early November, drop through late December, and remain at reduced levels through the following July. The testosterone cycle is largely governed by photoperiod, so just as decreasing daylight and increasing testosterone causes antlers to mineralize and shed their velvet, increasing daylight and decreasing testosterone causes antlers to fall off. According to acclaimed antler expert Dr. George Bubenik of the University of Guelph in Ontario, the testosterone levels causing antler casting appear to be very close to the levels responsible for velvet shedding.

How Do Antlers Fall Off?

Antlers grow from an attachment point on the skull referred to as the pedicle. This secure connection obviously withstands the impact from fighting, and most hunters have dragged at least one buck by the antlers. Dr. Bubenik explains that maintenance of the connection between the dead tissues of the antler and the living tissues of the pedicle is possible only during the period of high testosterone levels. So, when testosterone levels decline, a special type of bone cell called an osteoclast removes the bone tissue by reabsorbing calcium between the antler and pedicle, and the antler falls off. Bucks occasionally shed both antlers within minutes but more commonly carry one for a few more hours or days.

Again, photoperiod has a major influence on testosterone levels and thus the timing of antler casting, but other factors can impact them too. Nutrition is important, as bucks in good physical condition generally retain their antlers longer than those who are nutritionally stressed. Widespread early antler casting may signify a nutritionally stressed herd resulting from too many deer for what the habitat can support. This can be an annual event caused by harvesting too few antlerless deer, or a single event caused by a mast crop failure, prolonged flooding, extreme or prolonged cold, or some other environmental variable.

Depending on the severity of the injury, they may cast them earlier than they normally would have. Noted author Charlie Alsheimer reported in 2009 that one of his captive bucks cast his antlers during the first week in March for seven of eight years while the buck was 3½ to 10½ years old. The single exception came after the buck was injured while fighting. He cast his antlers on Christmas day that year, more than two months earlier than typical for him.

Dominance status can also impact testosterone. In northern regions, dominant bucks often shed their antlers earlier than younger, smaller deer. This may be related to nutritional status as many but not all older bucks partake heavily in the breeding season. It may also be related to younger bucks experiencing less dramatic decreases in testosterone levels. Bucks skip many meals during the breeding season, and those that rut hard may be in poor post-rut condition. This can occur even when abundant forage is available for deer. These bucks are choice candidates for early antler casting, as long as another overriding factor isn’t present.

That overriding factor is the presence of estrus does, as they can influence testosterone levels. Dr. Bubenik said an unbred doe’s pheromones can keep bucks’ testosterone levels elevated. This factor doesn’t relate to early antler casting, but it can explain late casting in some herds, especially those with highly skewed sex ratios during the rut, those with peak breeding seasons in late December and January, or those with high rates of sexual maturity in doe fawns. Most northern hunting seasons correspond closely to, or immediately follow the rut, and research in Pennsylvania suggests the majority of does are bred during their first estrous cycle, even in the absence of mature bucks. Conversely, many southern seasons begin well before the rut, and thus have the opportunity to dramatically skew the adult sex ratio prior to the breeding season. In these situations it’s not uncommon for does to go unbred during their first estrous cycle. Also, peak rut in some southern herds occurs from Christmas through late January, so the majority of does are in estrus much later than their northern counterparts. Finally, the productive Midwest experiences higher doe fawn breeding rates than the Northeast or Southeast. Highly skewed sex ratios, late ruts, and fawns reaching sexual maturity in December and January are three reasons that may explain why southern and Midwestern bucks tend to carry their antlers longer than bucks in the North.

In isolated incidents of early antler shedding, the bucks involved were probably injured during fall and cast their antlers early as a result. In situations where numerous bucks are involved or where bucks across several square miles cast their antlers early, nutritional stress, physical exhaustion from the rut, or a combination of the two are likely responsible. Nutritional stress can easily be confirmed or ruled out by assessing body weights, lactation status and/or kidney fat percentages from the does you harvested. This is one more reason to collect harvest data from every deer taken on the property you hunt and/or manage.

About the only bright side to early antler casting is it allows you to find sheds a little sooner!

What to learn even more about whitetail management and deer hunting? Meet the author, Kip Adams, in person each year – along with many other QDM experts and QDMA staff members – at the annual QDMA National Convention. Join us at the next Convention!