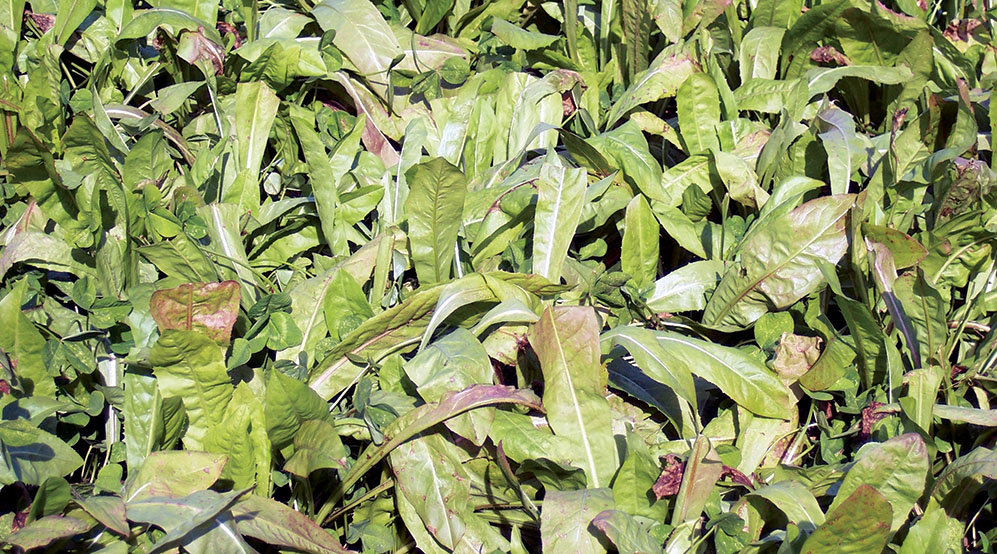 Chicory (Cichorium intybus) is a plant that is native to Europe but now exists all over the world. For centuries the leaves have been used as food and the roots used as a coffee substitute and additive. It also has several medicinal uses for both humans and livestock. Thanks in part to research conducted in New Zealand in recent years, chicory emerged on the food plot scene and has since made a big splash as a quality deer forage.

Chicory is considered a cool-season perennial forb (not a legume), which has the ability to persist for several years when managed properly. It is widely adapted to different soils across North America. Chicory leaves form a rosette at ground level and look very similar to dandelion or plantain. The leaves can be either smooth or serrated or have a combination of both depending on plant maturity. The leaves are typically 6 to 10 inches long but can grow longer depending on the variety, grazing pressure, and time of year. During summer it produces a purple or bright blue flower, and the flowering stem can reach up to 5 feet tall.

Chicory has many qualities that make it an excellent choice to include in food plots managed for deer. Perhaps one of the greatest benefits of chicory is it produces a long tap root, which helps it reach deep moisture during dry periods. This is especially true for sandy soils or in drier regions. Chicory also tolerates relatively acidic soils, however the pH should be maintained above 6.0 for best production and nutritional quality.

Because it is a perennial plant, chicory is relatively slow to establish compared to cereal grains or other annual forages. However, once established, chicory is highly preferred by deer and has excellent resistance to grazing pressure. In fact, Dr. Craig Harper at The University of Tennessee reported that nearly 60 percent of chicory was consumed by deer on low deer-density sites (which is the best situation for determining forage preference). In this category chicory ranked second only to soybeans among 20 of the most popular deer forages that included various clovers, cereal grains, brassicas, and cowpeas. Crude protein is also respectable at 20 to 25 percent, and it is also highly digestible with acid detergent fiber values (a measure to quantify digestibility) typically below 20 percent.

Overall forage production from chicory is good, with reported yields in the 4 to 5 tons/acre range (dry weight). Production typically is slightly lower than some of the perennial white clovers, alfalfa, or summer forage legumes, such as soybeans, cowpeas, or lablab. Nonetheless, chicory can perform well where perennial clovers cannot due to its ability to tolerate dry conditions in summer.

As with any planting, soil testing should be conducted to ensure you apply the appropriate amounts of lime and fertilizer to make sure nutrient levels are high and readily available by maintaining a neutral pH in the 6.0 to 7.0 range.

In the Deep South where hot, dry summers often prevent perennial clovers from persisting from year to year, chicory is an excellent substitute as it is much more capable of enduring these harsh conditions.

Chicory has high fertility requirements for optimal growth and production, thus it is important to apply the amounts recommended from the soil test to ensure nutrient levels are in the high range. Applying additional nitrogen after establishment is also recommended, but planting chicory with perennial clover can supply additional nitrogen to the plot to reduce fertilizer needs (discussed below in more detail). Maintenance fertilizer applications of phosphorus and potassium should be applied in spring/summer according to a soil sample.

Chicory can be broadcast into a prepared seedbed or no-till drilled, according to the planting equipment you have at your disposal. If broadcasting seed, plant 8 to 10 lbs./acre when planting alone, or drill at 5 to 6 lbs./acre. Because chicory and other perennials have a slow initial growth rate as they devote much of their energy into root development, I try to plant them as early as possible in the fall. This will allow more time for them to produce forage during hunting season. Thus, fall plantings in the South should occur in early-mid September, while planting should occur in August in the North. Chicory also can be successfully planted in the spring in the North if desired (April to May).

If broadcasting seed, be sure the seedbed is smooth and firm to ensure optimal germination and seedling establishment. Chicory seeds are very small, so it is important that the field does not have deep furrows from disking or large clods and debris to prevent seeds being covered too deeply. Cultipacking prior to sowing the seed will assist with achieving the ideal seedbed and enhance germination. Loose soil will reduce germination rates.

When covering the seed, be sure it isn’t buried more than 1/4-inch deep. If rain is in the forecast, you can simply allow rainfall to work the seed into the soil. If a dependable rain is not in the forecast, cultipack the field after planting to press seed firmly into the soil for good contact. If no-till planting, be sure to kill the existing vegetation with glyphosate two to three weeks prior to planting to eliminate weed competition prior to establishment. 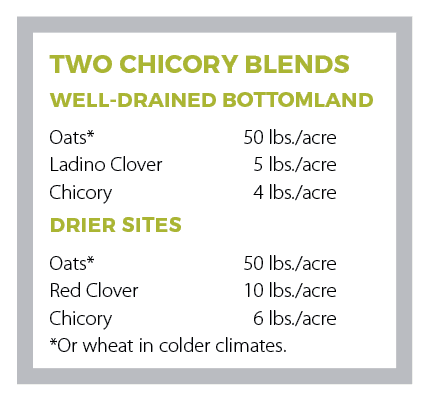 As previously mentioned, it is best to plant chicory in a mixture with other perennial crops. On well-drained bottomland sites that will maintain soil moisture through the summer, I like to plant the top mixture shown in the sidebar on this page. The oats (or wheat) provide the early attraction as the chicory and clover develop. As the ladino often fades out in late summer (in the South), chicory emerges as it is very drought tolerant. For drier sites, a good perennial mixture is listed in the bottom of the sidebar.

You can expect heavy use of these mixtures for several years if maintained properly. In late summer, mow the plot to clean it up and encourage new growth for the fall. This is also the time to top dress the plot with fertilizer and lime (determined from a soil test).

Chicory is a versatile forage and can be used in many ways. In the Deep South where hot, dry summers often prevent perennial clovers from persisting from year to year, chicory is an excellent substitute as it is much more capable of enduring these harsh conditions.