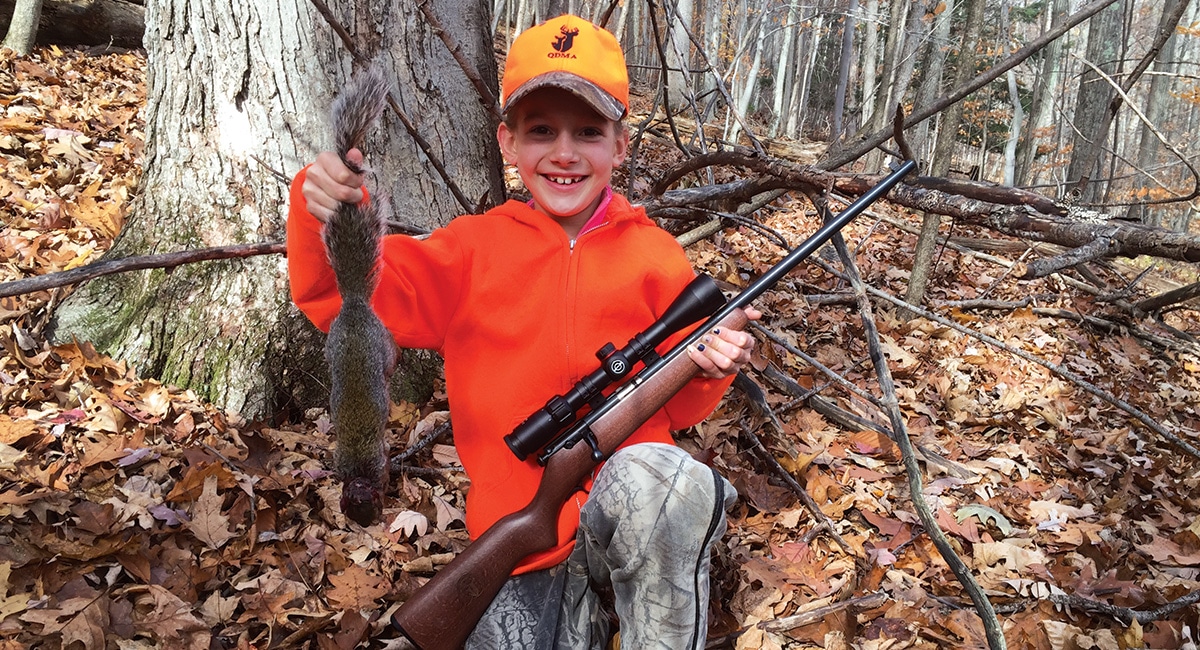 Deer hunting is extremely popular. Approximately 80 percent of hunters in the United States pursue deer, and 60 percent of all days spent afield involve deer hunting. However, when it comes to mentoring new hunters – youths and adults alike – I’ll argue their first hunts should not be for deer. Rather, they should be for small game, and the perfect species to start with are squirrels.

Gray and/or fox squirrels inhabit most areas east of the Rocky Mountains and can be hunted by the majority of deer hunters pretty close to home. Many to most deer hunters who are over 40 started with small game, and unfortunately that is a trend largely lost for today’s younger hunters. In addition to being fun, there are tremendous values gained while hunting squirrels.

No squirrels where you live? No worries. You can easily substitute rabbits, pheasants, quail or doves for this bushytailed quarry.

I grew up hunting small game at every opportunity. My buddies and I all bowhunted, but early fall was mainly a time to hunt squirrels, grouse, woodcock and turkeys. As young teenagers, we weren’t too concerned about deer hunting until rifle season started after Thanksgiving. Small-game season reopened the day after Christmas, and we were at it again. We knew we were having a lot of fun, and we brought home many meals of high-quality fare, but at the time we didn’t realize how we were honing our hunting and woodsmanship skills, or how those days spent chasing squirrels would pay dividends for deer later on.

The daily limit in Pennsylvania is six squirrels, and she only missed it by a half dozen. Bark flew oh so close to a few, and even though she never touched a squirrel, we had an absolute blast as evidenced in the photo I took as we headed home. The smile was big, our memories were big, and the lessons she learned were even bigger.

My daughter Katie accompanied me on her first hunt at age 2 when she helped put on a bear drive while secured in a chest pack. Since then, she’s been my partner on numerous deer, bear and turkey hunts, and has had her picture in this magazine for a couple of them. She is 9 years old now, and about three years ago I realized it was time for me to get back into small game hunting so she could learn how to hunt the way her grandfather had taught me. It also helped that Brian Murphy, QDMA’s CEO, made both of his daughters shoot squirrels before he’d let them shoot a deer. I always respected that requirement and thought it was a great rite of passage to becoming a deer hunter. Heck, QDMA’s Mentored Hunting Program involves eight steps, and deer hunting doesn’t occur until step seven. Our program is heavy on small-game hunting and woodsmanship skills.

Katie has grown up shooting a bow, BB gun, and .22, and in her mind shooting a deer would be easy. I think a lot of new hunters share this feeling. I mean it’s easy to hit the target, and deer are pretty big animals.

Katie got her first taste of success last spring during turkey season. She successfully debated her way into an opportunity to hunt turkeys, because even though she knew she had to shoot some squirrels before she could shoot a deer, she argued, “A turkey isn’t a deer, and there’s no squirrel season before spring gobbler season.” I’m guessing that isn’t the last debate we will have or the last one she’ll win. Those of you reading this who have daughters know exactly what I mean.

Katie shot her first turkey with her Great Grandma Adams’ single shot .410. That was the same gun I shot my first squirrel with and the same gun her Uncle Chris first took to the woods. She’s watched me shoot enough critters that she fully understood it’s different than target shooting, but she learned a lot that morning, and that gobbler didn’t make it easy for her. Needless to say, I was extremely proud of her hunting skills – and her shooting skills.

Fast forward to last fall. Youth squirrel season opened on a gorgeous Saturday morning. Gorgeous for archery hunting, and daylight found me in a treestand. Ninety minutes later I was climbing down, not because I shot a deer, but because Katie was chomping at the bit to go squirrel hunting, and I’ll do everything possible to feed that fire. A short while later, she was wearing that beautiful combination of camouflage and fluorescent orange. She chose to take a single-shot .22 rather than her .410. Both are great for squirrels, and both have open sights. Her shooting skills were about to be put to the test. It was a perfect day for squirrel hunting, and it was almost nonstop action for two hours. The woods were crawling with squirrels. At one point, Katie shot at two different squirrels, in two different trees, in two different directions from the same spot. When the smoke settled, she had shot 19 times at 15 squirrels.

The daily limit in Pennsylvania is six squirrels, and she only missed it by a half dozen. Bark flew oh so close to a few, and even though she never touched a squirrel, we had an absolute blast as evidenced in the photo I took as we headed home. The smile was big, our memories were big, and the lessons she learned were even bigger.

Let me explain. She shot 19 times at 15 squirrels, but there were many other “almost” shots at additional bushytails. Every one of those provided a great mentoring opportunity. Katie learned to seek out where they’d be feeding and how to keep the sun at her back so she could see into the trees effectively. She searched for food, she searched for cover, and she watched squirrels and learned how they were moving between each. The first few quickly evaded us, but she learned to anticipate where and when they’d move and was able to get in position for some shots. She was a fast learner, and even though she wasn’t hitting squirrels, she was getting to the right spot for a shot. Her hunting-shooting skills, versus her target-shooting skills, will develop quickly with this type of practice.

Katie shot 19 times, so we likely had the previous conversations dozens of times, as many squirrels never provided a shot. The point is she got more practice in those two hours than most new hunters would get in five to 10 years of deer hunting

We also had numerous opportunities to practice safe and ethical shots. Our conversations sounded like this:

“Don’t shoot, you can’t see what’s behind that brush pile.”
“Wait until it turns so you can clearly see its vitals.”
“Okay. When you’re comfortable, go ahead and shoot.”
“Put the safety on.”

Katie shot 19 times, so we likely had the previous conversations dozens of times, as many squirrels never provided a shot. The point is she got more practice in those two hours than most new hunters would get in five to 10 years of deer hunting. Think about that for a second. I promise you that even though she’s never attempted to shoot a deer, she’s far more ready and capable of doing so than many or most young deer hunters who have never hunted small game. That’s why she has the squirrel-harvest requirement. That’s why I quit bowhunting after only an hour and a half that morning, and that’s why small-game hunting will remain a regular fall pastime for us.

The next Saturday opportunity for us found Katie chomping at the bit again. Since she had a good taste of hunting with open sights, it was time for a lesson in hunting with a scope. We put a 3×9 power scope on her .22, sighted it in, and hit the woods. Katie learned to have the scope on 3-power while sneaking (I carried the gun, as Pennsylvania’s mentored hunting laws require the mentor to do so until in a stationary position). She practiced adjusting the scope to higher power when the distance necessitated it and a solid rest allowed it. Most importantly, the woodsmanship skills she learned on our previous hunt were on full display, and she swiftly got herself into good shooting positions, always had her gun pointed in a safe direction, and quickly put the safety back on when a shot opportunity passed. Unlike our previous outing, we didn’t see nearly as many squirrels, and Katie didn’t shoot 19 times. However, she did fire nine shots, and two of them found their marks. We exchanged huge smiles and hugs, the kind not reserved just for fathers and daughters but the kind exchanged between every mentor and new hunter following early success.

Never experienced that? Do yourself a favor and mentor a new hunter this year. Sure, my archery hours suffered a little, but as deer hunters we owe it to our proud heritage to give back to the next generation. Create a deer hunter by sharing your hunting knowledge with a new hunter on a squirrel or small-game hunt this year. You’ll be glad you did, and our ranks will be stronger for it. Here’s to squirrels, .22s, and wide-smiling youngsters!