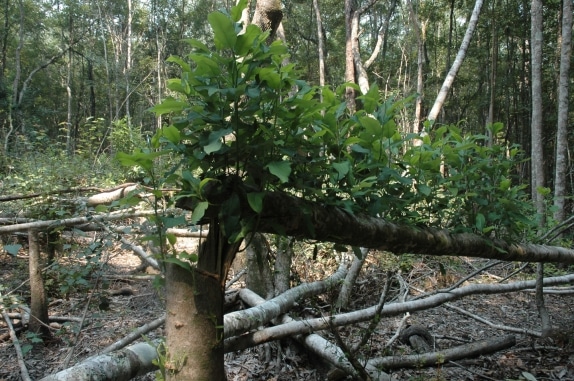 Timber stand improvement (TSI) involves removing unwanted trees that are competing with desirable trees. What is the best thing to do with the unwanted trees? Cutting them off at the ground line is a standard timber management practice. Once the trees are cut, deer can feed on the resulting stump-sprouts. If deer management is a priority for you, here is a much better idea.

This plan creates living cover for wildlife at the same time as providing abundant browse. My technique for this job is half-cutting, also known as “hinge-cutting.” Trees are cut only halfway through. They fall and create instant cover but do not die, so they continue to produce leaves and vertical shoots. If they are desirable browse species, a new food source is created.

Half-cutting is a well-known habitat management technique in the shrublands of the American Southwest. People take a clump of mesquite, select a stem, give it a hack with a machete, then bend the stem to the ground. They might do this in an area about the size of a basketball court. This makes a sprawling mat of living vegetation under which quail can take refuge from hawks.

In forest country you can do the same thing. Imagine a stand of young, vigorous hardwoods. There they are, about the diameter of baseball bats or perhaps as big around as your arm, crowding each other, one per square yard. The ground below is layered with fallen leaves, but sunlight reaching the ground layer is too scarce for much plant growth. You can see a rabbit at 30 yards. From a timber management perspective, this stand needs thinning. Leave the best to grow into timber and cut the rest. Such strict timber management will, as time goes by, create a closed canopy of quality timber and a clean forest floor. Half-cutting will allow you to add valuable living thicket cover to the scene and still thin the stand.

Half-cutting is, in many situations, an improvement of the TSI technique. Normally with TSI, the idea is to cut all the competing saplings to allow selected stems to grow, at ideal spacing, into nice straight trees. Half-cutting is a good way to provide food for browsing animals such as deer, provide thicket cover for quail or grouse, nesting cover for turkeys, and release your best saplings for timber, all at the same time.

Half-cut trees may live for years while they continue to provide browse and cover. If you have a large area of park-like oaks without cover, deer will often bed elsewhere and then come to feed after dark. If you maintain patches of half-cut cover, they are more likely to bed within the stand and be more available for hunting. Near a wildlife food patch or forest opening is a good place for such a manmade thicket. I have also used half-cutting as a forest edge management technique. It provides thicket cover at the edge of a field while releasing the best edge trees from competition for sunlight. I have used it to favor open-grown, broadly spreading mast-bearing trees. I have a magnificent water oak with a DBH of three feet. Young and vigorous sweetgums had grown to such a height that they were about ready to shade the horizontal oak branches. I used the half-cutting technique to put the competing sweetgums down and create a living thicket below.

Here is how to make the cuts. For small-diameter stems, the simplest way is to hold the sapling in one hand, bend, and whack the bend with a machete. Two or three shallow cuts side by side will allow a better bend than one deep cut. A hand saw or a chainsaw is easier for larger stems. After the cuts, force the sapling down until it is parallel to the ground. How high to make the cut? It is your decision. I usually do this at waist level because it’s easier.

For larger trees that tend to break rather than bend, I may make a T-cut. The T-cut is my own invention. First I make a vertical plunge cut with a chainsaw slightly closer to the side of the tree that is in the direction of the anticipated fall (Note: always be cautious about kickback, but especially when starting plunge cuts, since contacting wood with the nose of a chainsaw guide bar is how most kickback occurs). I start at waist height and force the cut down. How far? Try various lengths, but make the cut at least as long as the diameter of the tree. Some tree species tend to break and therefore need a longer cut. Next I drive a wedge into the saw kerf just below the halfway point of the vertical cut. Then I make a cut at right angles to form the T. If the tree doesn’t go down after connecting the two cuts, I give the tree a push or I drive the wedge. I don’t let the tree fall toward the cut side because it is more likely to break. Bark and wood withstand compression better than stretching. Sometimes I go through a stand making the cuts without pushing the trees down. I make the cuts all on the same side. Then I abandon the job. When the wind comes from the right direction the trees go down. It saves time. I don’t do this with big trees. It’s dangerous to leave them upright!

As the years go by your manmade thicket cover will fade as the intact trees develop their crowns. Shade will spread over the struggling horizontal trunks. Some of the horizontal trees will develop hollows that will serve as refuges for various wildlife. Some will develop new upright sprout stems that need to be half-cut again. But in the meantime, you will have had value from browse and cover from the half-cut trees.