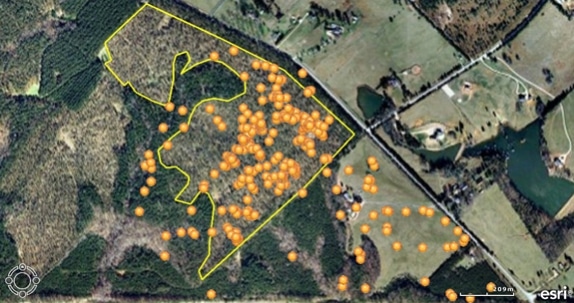 As part of a research project funded by the Georgia Department of Transportation and the Federal Highway Administration, Jim Stickles, a graduate student at the University of Georgia Deer Lab, and undergraduates Swanny Evans and Chad Jenkins, captured nine adult bucks, five yearling bucks, nine adult does and two yearling does from properties in Morgan County, Georgia. Each deer was fitted with a GPS tracking collar to monitor highway crossings by deer before and after installation of a highway barrier fence. It will be a couple of years before the study will be completed. However, we thought you might enjoy getting a sneak peek at some of the deer movement data as testimony to the value of GPS technology in wildlife research.

How many times have you asked yourself, “If I were a buck, where would I be?” In the following series of maps, you may be surprised how little a buck might travel when he has adequate food and escape cover. This 3.5-year-old buck (about 105 B&C) was collared in June 2012 at the edge of a large four-year-old clearcut. His GPS collar recorded his location every hour until October 15, when the collar unfortunately malfunctioned. (QDMA members can look for an article on what we learned from the movements of other deer in the study in a future issue of QDMA’s Quality Whitetails magazine).

As avid deer hunters ourselves, we at the UGA Deer Lab have an appreciation for just how difficult it can be to harvest a particular buck. As we all know, not all bucks select similar habitats or behave in similar ways. However, you might share this story the next time a hunting buddy asks, “Where have all the bucks gone?” The buck might have moved his core area off the property, or he might be right under your nose. So let us take a month-by-month look into the life of a whitetail and see what we can learn.

June: The buck was captured at the location indicated by the green pin in the map below. Inside the yellow line represents about 100 acres of densely vegetated clearcut. This buck spent almost ALL of his time within this area where he had easy access to an abundance of food and cover. Each of the points outside the clearcut occurred at night. Although the buck had recently been darted, handled, and collared, he often returned to the location of his capture. He likely did so to feed from the corn pile that we maintained for purposes of attracting other deer to be darted. 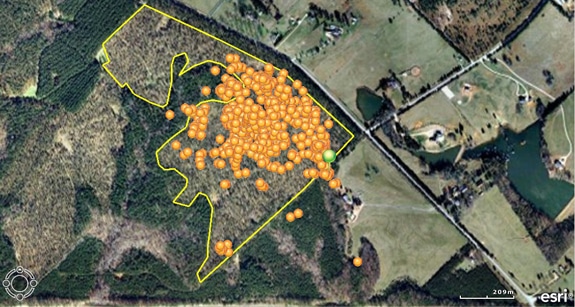 July: Again, a majority of the buck’s locations are within the clearcut. However, on several occasions during July 8-12, he visited a small clump of trees and shrubby vegetation located about 140 yards away in a nearby field, possibly because of a seasonal food source. Each of these excursions occurred from midnight to 3 a.m. The only record of him leaving the clearcut during daylight hours occurred when he used the adjacent drainage to likely access another more distant part of the clearcut. 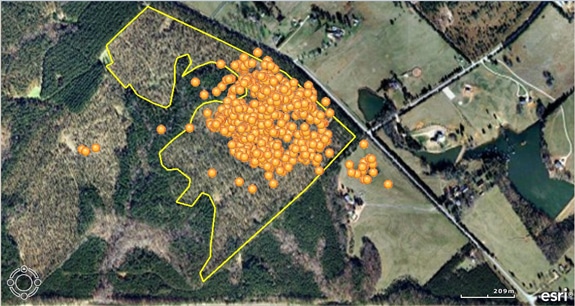 August: The buck rarely left the clear-cut. However, he made a few mid-afternoon excursions to nearby closed-canopy pine plantations and an early morning visit to the adjacent open field. 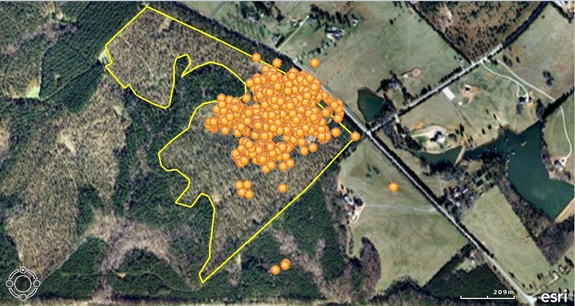 September: The buck rarely ventured far from the edge of the clear-cut. He did so only before sunrise and after sun-set. An early season bowhunter would have had little chance of shooting this buck unless they paid close attention to wind direction, sneaking close to his core area without making him aware of their presence. 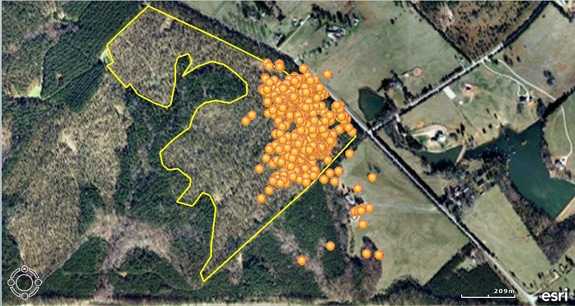 October: Cooler weather, changes in food availability, increasingly competitive behaviors among bucks, and the proximity of the breeding season all likely influenced the buck’s changing movements, as he clearly began using more of the area around the clearcut. This agrees with previous research showing bucks using the greatest percentage of their home range during fall and the rut. Even so, the buck only left the seclusion of the clearcut during daylight on five occasions, all in late afternoon. If a lucky hunter was positioned outside the boundaries of the clearcut at the right time, the buck was vulnerable to being seen only once in the closed-canopy planted pines and four times in the drainage. 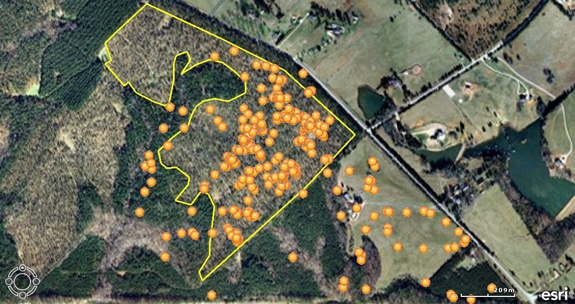 This example emphasizes the importance of providing adequate cover and food for whitetails in all seasons, to help encourage use of your hunting land by deer. When a deer has what it needs in one location, it travels less of the surrounding landscape. However, this also requires you to hunt wisely if you want to see the deer yourself. There’s a lot to the saying, “It’s better to be lucky than good.” Successful deer hunting often requires both.

About the Authors: Jim Stickles and David Osborn contributed to this story. Jim Stickles is a Masters student working under Drs. Karl V. Miller and Robert J. Warren at the University of Georgia’s Deer Lab. Jim is a member of The Wildlife Society where he is a certified Associate Wildlife Biologist. He is also a member of QDMA. David Osborn is the Deer Research Coordinator at the University of Georgia’s Deer Lab and a QDMA member. David is a regular contributor to Quality Whitetails magazine.

Did you know? QDMA works annually to secure funding for whitetail research projects that have the potential to help deer hunters hunt more effectively, create better deer habitat, or ensure the future of our hunting heritage. Your QDMA membership dollars do many good things for whitetails and the future of hunting, and supporting quality deer research is one of them. Join QDMA today!