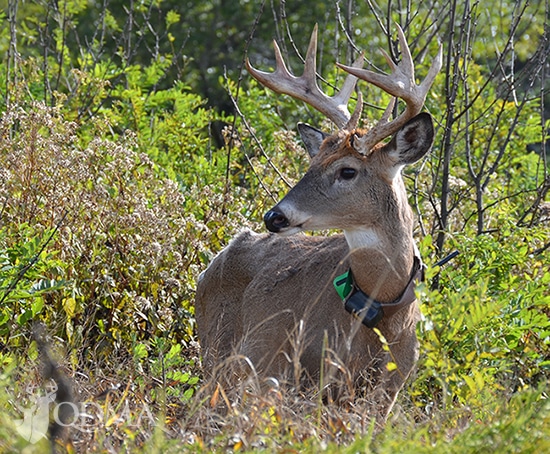 If you hunt whitetails, you’ve probably already heard of chronic wasting disease (CWD). This neurodegenerative disease is caused by an odd sort of protein called a prion that develops in the brains of infected animals and causes abnormal behavior, loss of body condition and eventual death. Animals usually die from a variety of indirect causes resulting from their CWD infection, which is why most hunters will never see a deer showing classic CWD symptoms. These CWD prions can be passed from one deer to another either by direct contact or through environmental reservoirs.

Wildlife biologists around the country are studying CWD to better understand it and help stop its spread. One area of interest to researchers like us is the genetic basis of the disease. Our work at the University of Wisconsin, as well as other studies, shows that some deer are less susceptible to CWD than others due to genetic differences. However, this genetic variability does not necessarily mean that deer are evolving resistance to CWD. The disease is still 100 percent fatal to all whitetails that contract it.

Rather, the genetic variability, or genotype, that makes deer more or less susceptible to CWD affects how the errant proteins that cause the disease, or “prions,” work in their bodies. All mammals produce prions, which are typically used for specific bodily tasks that are not currently understood. After a relatively short time the older prions are destroyed and new prions are produced to replace them. These “normal” prions cause disease when they become misfolded and can no longer be properly broken down, similar to Alzheimer’s disease in humans.

Deer with the SS or GS genotypes are not immune to CWD, but they are more likely to live about eight months longer before dying of the disease, and therefore they have the potential to spread the disease to more deer.

All deer can develop CWD, but their particular genetic makeup determines how likely it is they will become infected and how long they survive before succumbing to CWD. There are three genotypes that scientists understand relatively well based on studies of white-tailed deer, called GG, SS and GS. These genotypes refer to changes in the prion protein that leads to disease. Similar genetic variations occur in elk and mule deer, but the specific susceptible and resistant genotypes differ for each of the deer species.

White-tailed deer with the GG genotype are four times more likely to become sick with CWD compared to the GS and SS genotypes (see the chart below). Deer with the SS or GS genotypes are not immune to CWD, but they are more likely to live about eight months longer before dying of the disease, and therefore they have the potential to produce more offspring. Because they tend to live longer, they also have the potential to spread the disease to more deer.

The ability to pass genes from one generation to the next is the basis for natural selection, which, over long periods of time, leads to evolution. Animals that are more “fit” – that is, that can better survive and reproduce – contribute more offspring and thus more of their genetic material to the future population. Over long periods of time, genes that are more helpful for survival and reproduction become more common in the population.

But, if you think of natural selection as a game in which the winner rules the gene pool, it’s not exactly a winner-take-all jackpot. It’s more like a long game of chess progressing slowly over many tiny moves. This is because fitness advantages may be quite small and require many generations to accumulate changes in the gene pool.

On top of this, because CWD progresses slowly in individual deer – giving deer of all genotypes the opportunity to reproduce – as a result there is less “pressure” to select for one genotype over another. So, the less susceptible genotypes aren’t necessarily rapidly “favored.”

Over time, the deer population could contain more individuals with SS or GS genotypes, but we find that this might take more than 100 years in the Midwest, depending on the rate of CWD infection.

Our work shows that because SS and GS genotype deer are infected less and live longer once infected, they have the opportunity to produce more offspring over their lifetimes compared to GG deer. Over time, the deer population could contain more individuals with SS or GS genotypes, but we find that this might take more than 100 years in the Midwest, depending on the rate of CWD infection. Higher rates of infection lead to higher selection pressure and more rapid changes in population genetics, but higher infection also means higher disease mortality and can substantially reduce deer populations.

In places where CWD has been present longer, like the western United States,  or where CWD prevalence is high, like infected game farms, these changes could happen more quickly, but these changes remain difficult to predict.

For deer managers, these kinds of genetic changes happen too slowly, and in some areas it is necessary to substantially reduce deer harvests to prevent collapse of highly infected populations. Since adult bucks have been found in some areas to have the highest rates of infection and higher mortality from the disease than does, some areas will inevitably see a more rapid decline in mature bucks.

These genetic changes also do not occur in a vacuum. The same genotypes that make deer less susceptible to CWD could also make them less fit in ways we do not yet know. For reasons we do not currently understand, SS genotypes are generally rare in many white-tailed deer populations, being present in about 5 percent or fewer deer. In captivity some of these SS deer have been reported to have abnormal behaviors. This suggests they may have less overall evolutionary fitness – either lower survival or reproduction – than other genotypes. Mother Nature tends to weed these individuals out of the gene pool, as they are less fit in the wild. Given this, being less susceptible to CWD may not matter if you are less able to survive in the wild.

Hunting also probably doesn’t favor one genotype over another, further blurring the evolutionary future. Additionally, we don’t know how the CWD prion proteins might change over time to influence both the infection and mortality of different genotypes and deer populations.

There are still many unknowns that make clear predictions about the longer-term evolution of CWD resistance difficult. The old saying “Be careful what you wish for” may be very applicable here. If we wish for natural selection to take the place of deer management, we are likely to encounter some unexpected consequences.

Dr. Stacie Robinson is a research ecologist for the National Oceanic & Atmoshperic Administration in Hawaii. She obtained her Ph.D. researching CWD in white-tailed deer at the University of Wisconsin–Madison.

Dr. Michael Samuel is emeritus professor at the University of Wisconsin–Madison. He has studied diseases in wildlife for 30 years and conducted research on CWD for the past 15 years.

QDMA Takes Action
Our ambitious new five-year goals include contributing $1 million to deer research and technical assistance. We contributed $865,000 to such efforts since 2006, but going forward more of these research dollars need to be directed toward concerns like CWD. One of the most important research needs is the development of a practical and reliable live-animal test for CWD. Given that a major route of disease transmission is movement of live deer, such a test would be a tremendous help in the fight. QDMA will meet this challenge through an increased financial commitment from the National Office and seeking contributions from past partners, new sources, and grants, which we have already begun applying for. Your QDMA membership, new-member recruitment and donations are funding this important work. Thank you!