In the 1980s, I read an article praising the resiliency of the white-tailed deer. No doubt, whitetails possess an uncanny ability to ward off, or at least endure, many diseases and parasites. They also have a well-deserved reputation for rebounding from seemingly life-threatening injuries.

The author of that article fancied himself somewhat of an expert on deer. I was soaking in the new information on my favorite quarry until the author cited an incident that had occurred on a hunting property in his neighborhood. Supposedly, a local hunter shot a deer that had overcome a traumatic injury in which a sliver of bone had become imbedded in the heart. Since the bone was surrounded by cartilage or “gristle,” the author thought it was the deer’s long-term response to an out-of-place bone fragment.

He was right about one thing – that bone had been there for quite a while. Would you believe for the life of the deer?

The article harkened me back to graduate school at The University of Georgia. I remembered having to learn more than I thought was necessary about the mammalian skeleton in a mammalogy course. I was already familiar with many of the bones, but it was the heterotopic bones, those in unusual places, that intrigued me. One, the rostral bone, occurs in the upper rim of a pig’s snout. Another, also thought to provide strength or rigidity without connecting to another bone, is called the os cordis. It is found in the hearts of ruminants including goats, sheep, cattle, and all species of the deer family. Yes, the white-tailed deer has a bone in its heart.

To locate the os cordis bone in a deer’s heart, insert your forefinger and thumb into the two largest openings in the heart and pinch the divider, as seen below. You’ll feel a rigid, enlarged section in the divider, and that’s where the heart bone is located. 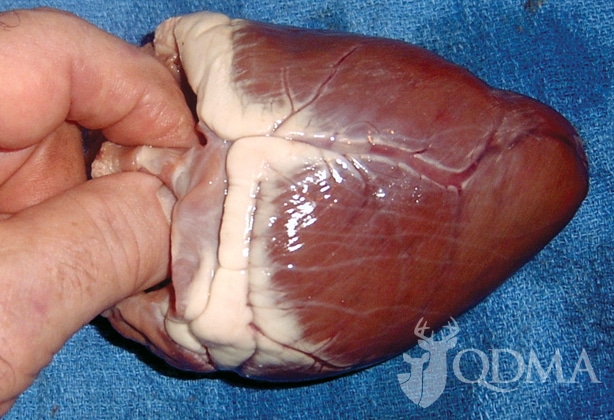 As a young field biologist, I encountered hundreds of hunter-harvested deer each year and also performed necropsies on scores of deer to determine the cause of death. With such a large sample size, I decided to conduct a study of os cordis bones in whitetails. My guess was that these bones would increase in size as an animal grew older. I also thought, or at least hoped, there would be a difference in the size and/or shape of these bones in males and females. Throughout one deer season, I collected the heart bones from both sexes and all ages of deer. Before I got too deeply involved in this project, I could already see tremendous overlap in the size of the os cordis bones from fawns and mature deer. In fact, some bones from fawns were larger than those collected from adult animals. Also, there was absolutely no correlation in bone size or shape with the sex of the animal. Oh well, it was an honest attempt to learn more about the noble whitetail.

Here’s one for you to ponder. If you find a deer skeleton in the woods and the skull is missing, can you determine the sex of the animal? The answer is yes, but which bone will yield the answer? Ask a QDMA member. They learned the answer in a recent issue of our magazine, Quality Whitetails.