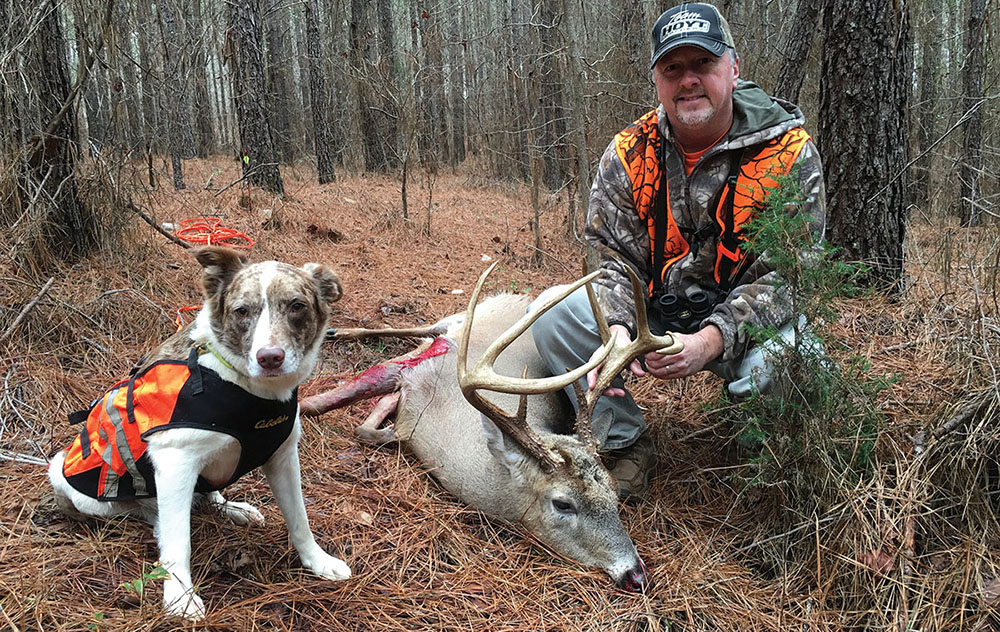 There’s no worse feeling in deer hunting than losing a deer you’ve shot despite your best efforts for a recovery. Unfortunately, if you hunt long enough, it’s a feeling you are likely to experience at some point. For most of my years as a deer hunter, those efforts included following a blood trail as closely as possible, often getting down on hands and knees if the trail got sparse. If the blood stopped altogether, I would gather as much help as I could to perform a grid search of the area until I felt like I had exhausted all possibilities of recovery. Fortunately most of today’s hunters have another option – the use of a tracking dog.

While using a dog to find a dead or wounded deer is not a new concept, it is one that has increased greatly in popularity and acceptance over the last 20 years. In NDA’s 2011 Deer Report, 27 states allowed the use of tracking dogs to locate dead or wounded deer. In 2019, that number had climbed to 35 states, and today 43 states allow the use of tracking dogs. The only seven states to still prohibit their use are Arizona, Connecticut, Massachusetts, Nevada, Oregon, Rhode Island and Washington.

As long as you aren’t hunting in one of those seven states, I would encourage you to be open to the idea of using a tracking dog, if needed, to locate a deer you otherwise may not find. But it’s important not to wait until you actually need one to figure out what to do, but to prepare yourself now for that possibility.

Preparing for Using a Tracking Dog

Before you head out for your first hunt of the season — or your next hunt if deer season has already opened in your state — I would encourage you to find a few trackers in your area that you could call on should the need arise. This will eliminate having to scramble to find someone late in the evening or at night when you’re trying to find a deer and the blood trail has gone cold. It can also help you vet potential tracking dog handlers and prepare yourself for any expenses that may be involved in the track (more on that later).

Probably the best way to locate such a person, if you don’t already know one personally, is to check with a national organization like the United Blood Trackers. They have a list of deer tracking dog handlers on their website, organized by state. There may be similar organizations within your state, like the Georgia Blood Trailing Network here where I live, that can provide a more comprehensive list of local trackers. Another source could simply be to ask around at local hunting supply stores or in local Facebook hunting groups.

Once you’ve located some trackers in your area, don’t hesitate to reach out to them to ask about their dogs, their experience, and fees. The cost associated with using a tracking dog ranges widely from free, to covering travel expenses, up to a few hundred dollars. It’s always best to know what you’re getting into before you’re out in the woods looking for a deer and have to make that call.

Another important factor to figure out before needing a tracking dog is who owns the properties bordering the one you are hunting. This is critical because many states require landowner permission to track a dead/wounded deer onto someone else’s property, and even if your state doesn’t require it, it’s common courtesy to let a landowner know you need to access their property to recover a deer. A reputable tracker will not cross those property lines without permission, and the last thing you want to have to do in the middle of the night while trailing a deer is track down a landowner and call them or go knock on their door. Find those landowners now, track down their phone numbers and, if possible, go introduce yourself and let them know who you are and that you hunt on a neighboring property. I’d go as far as to ask permission to recover a deer ahead of time. That would eliminate any need to call them in the middle of the night if you have to cross the property line to track a deer.

I believe knowing how to find and follow a blood trail is an important skill that every hunter should know and hone. However, I also think we should make every possible effort to recover any deer we’ve shot, and there are times when a tracking dog may be necessary to fulfill that obligation.

When to Use a Tracking Dog

Now I’m not suggesting calling a tracking dog every time you shoot a deer. I believe knowing how to find and follow a blood trail is an important skill that every hunter should know and hone. However, I also think we should make every possible effort to recover any deer we’ve shot, and there are times when a tracking dog may be necessary to fulfill that obligation.

So, how do you know when to make that call?

If the shot looked like a solid double-lung hit and you have good, bright red blood at the point of impact with a good blood-trail to follow, then there’s probably no sense in getting a dog involved. Give the deer ample time and go recover it. However, if you know the shot was less-than-ideal, or if you take up a blood trail and soon run out of any sign of blood, it’s probably best to get a dog involved. Also, if in the process of blood trailing a deer, you jump the deer from a bed, then it’s probably a good time to back out and call in a tracking dog as well.

Getting the Best Results From a Tracking Dog

There are some important steps you can take after the shot to get the best results from a tracking dog, and most of these are great practices for any deer you shoot, regardless of whether a dog is needed. First, it is extremely important to make a mental note of where the deer was standing at the point of impact, how it reacted to the shot, which way it headed, and where you last saw it. Those memories can quickly get lost in the excitement of shooting a deer, so try to make yourself stop for a second and take mental notes of that information. Better yet, pull our your phone and take photos of those locations, either pointing to them in the photo or taking the photo and then drawing in arrows to the spots in your phone’s photo editor. Things can look much different down on the ground than they did in the deer stand, so having that photo can really help you pinpoint those important locations. All that information is going to be critical to the tracker to help them determine where to start the search and how to best proceed.

When you do start the blood trailing process, there are a few DOs and DON’Ts that will increase your odds of finding the deer should you need to call in a tracking dog. Those include:

As deer hunters, we put a ton of time and effort into getting a shot opportunity at a deer. This season, let’s make sure we are putting just as much effort into locating that deer once a shot has been made. Use your blood trailing skills to do as much as you can, but if those skills aren’t enough to recover your deer, don’t hesitate to call in a tracking dog, where legal.