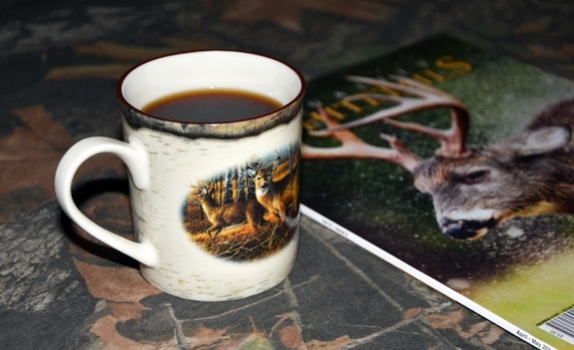 Coffee equals wisdom. It must. The sheer amount being consumed by contractors, farmers, retired civil servants and general purveyors of anything and everything is proof. In a recent conversation with some community elders, I made some discoveries about time-honored traditions and ideas about managing property for deer hunting. I was the youngest person by 15 or 20 years at this daily round-table gathering, but between the refills of coffee and complaints about the cost of breakfast, I was surprised at some statements made concerning Quality Deer Management (QDM).

First, let me make perfectly clear that I believe if our legislative process was much less informal and this country’s decisions were made at small-town coffee shops, this would be a different country. There would be no filibusters, no lobbyists, just frequent bathroom breaks and lots of groaning and moaning when getting up from their chairs. I won’t commit to saying things would be better or worse, but I suspect that swift and deliberate action on pressing issues wouldn’t be a problem.

So, after the initial discussion of the weather and someone getting chastised for letting the grass grow too high in their yard, I slipped in a comment concerning the upcoming deer season and hopes of cooler weather. Again, there is no direct route to any subject without talking about the weather in a small-town coffee shop, so there were predictions and discussions about what type of winter they all expected. I mentioned that I had seen a nice deer crossing the road on a neighbor’s property, and soon the conversation was headed in the right direction.

Among the group, there were several coffee-infused retirees who owned a considerable amount of land. Some of these landowners hunted, some did not, but all had opinions on the way hunting has changed over the years. Let me remind you, these are the type of folks most hunters will talk to in order to gain permission on private hunting lands. I had grown up in this small town, and I knew which of these landowners just were not “open” to the idea of letting people onto their property for any reason.

I did learn that old adage of the “sacred doe” has finally been overcome by hunters and wildlife managers. I also heard comments about people with no respect, trespassing woes, and the idea that deer will take care of themselves. Well, I cannot tell a landowner how to handle trespassing concerns. Nor can I address kids on ATVs with no regard to personal property or fences. I did see an opportunity to interject on the idea that deer can simply take care of themselves. I felt I might have a chance to plant an idea among these men much wiser than I. As one of the gentlemen pointed out, he wasn’t old or wise, he was experienced, and experienced is the new “sexy.”

Between the rounds of runny eggs and country ham, I was able to explain that managing deer isn’t simply about growing those big bucks with antlers that aren’t edible. I confronted other comments regarding the fact that this isn’t Texas and these deer don’t live long enough to reach “Muy Grande” stature. I pitched the idea that improving habitat for deer was the goal, and that while micro-managing for a specific class of deer wasn’t the goal of most QDM, it could be an added benefit. The benefits would encompass the entire population of deer in their area. I also involved other landowners by adding that if all bordering/adjacent landowners were on board with QDM, they could look after property borders and cut down on damages and trespassing.

“Well, it’s easy for you to talk about managing land for deer when you don’t have any,” was an argument posed to me.

I live in the city limits and do not have but a few acres, so I took that argument and challenged that landowner to give me an opportunity to show him I could improve the habitat on his property. I was then told that he was only interested in his grandchildren hunting his property, and I’d kill all the deer out before they got an opportunity to hunt. I assured him I wouldn’t, but that they would reap the benefits of more browse being available and food plots keeping deer from wandering away from his property. I’m still waiting on an answer from that landowner, but maybe I gave him a little motivation to manage his property for the grandkids.

Just like the cemented idea among our older generation of sacred does, QDM will not be accepted overnight. The idea of QDM and the basis of total herd management must be preached and discussed in order to catch on. Old dogs can learn new tricks; heck some of those guys actually have a Facebook account! Hunters must simply wear another hat and be an advocate of QDM. Put your best foot forward; be professional, persistent and informed. Oh, and drink more coffee.

About the Author: Brad Duffie of Guntown, Mississippi, is a husband and father to four kids. He is a former volunteer hunter safety instructor who has been chasing white-tailed deer for over 26 years with no signs up letting up anytime soon. Brad has also been planting food plots and managing deer for over 15 years, and he enjoys that as much as hunting. Brad graduated from Ole Miss in 2000 with a bachelor’s degree in Print Journalism.