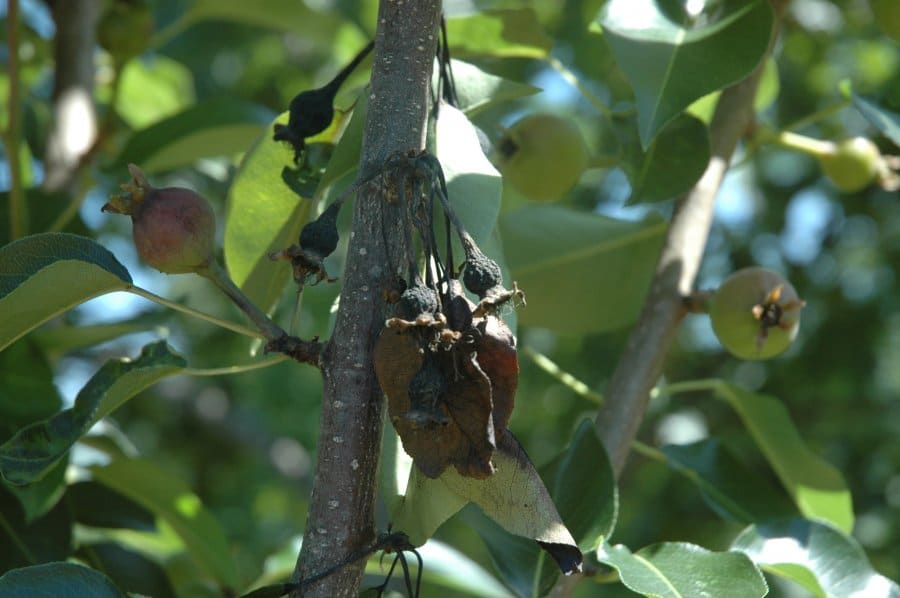 A southern crabapple planted at QDMA Headquarters in Georgia was one of those uncommon trees that blows past all of its sister seedlings planted the same year – rocketing upwards in height, spreading a beautiful crown of limbs, and throwing an incredibly dense spray of flowers and fruit at only three years of age. So I nearly shed tears when I had to take my shears in hand and hack away nearly half of the tree’s perfectly shaped crown, including piles of immature fruit.

Fireblight was the cause.

In spring 2010, the contagious bacterial disease hit pear and crabapple trees at QDMA Headquarters particularly hard. Fireblight hits trees in the Rosaceae family – pears, apples, crabapples, hawthorns, and others – and it seems to be worse in certain years, under certain weather conditions, especially in unusually warm, wet springs. Branches, leaves, flowers and fruit that are affected literally appear to have been blow-torched, thus the name “fireblight.” (Compare the unaffected immature pears to the blighted pears in the photo above and in the Gallery photos below). If the bacteria reaches the roots, or infects the trunk, it will eventually kill the entire tree.

The bacteria-rich ooze that seeps from wounded limbs is terribly contagious. Perching birds can spread it from tree to tree on their feet. Pollinators like honeybees can spread it to flowers. Even wind and rain can transport the bacteria throughout a tree, or to other nearby trees. That’s why it’s important to take action quickly and remove affected parts as soon as you notice them. Spring is the time of year to be especially vigilant, as the bacteria seems to establish itself best in new growth and flowers. If you’ve planted pears, apples, crabapples, quince, or hawthorn in your deer habitat – or if they occur naturally – watch your trees closely.

There are some antibiotic attacks you might consider, but this is likely to be more expensive and labor intensive than most habitat managers have time for. And, as with any antibiotic, misuse of this option is creating antibiotic-resistant strains of fireblight. Check with your county extension agent if you want to consider that level of prevention. However, being vigilant and removing infected limbs as soon as they appear is effective for preventing spread and saving individual trees.

To do this, you’ll need pruning shears, a spray bottle filled with rubbing alcohol, and a large lawn-and-leaf bag. Keep in mind that you are dealing with a highly contagious bacterium. If you aren’t careful, you can spread the disease even as you are trying to control it, on your hands and pruning shears. Make it a rule to touch only the infected parts as you remove diseased structures, then carefully place the blighted plant material in the leaf bag. Remove the clippings from the area and burn or bury them to ensure the destruction of the bacteria.

As you clip off diseased parts, make your cuts several inches down from each visibly damaged area to be sure you get all of the contaminated area on that limb. After every cut, mist your pruning shears with the rubbing alcohol to kill any bacteria. If you don’t do this, you can spread bacteria to healthy parts of the tree, or to another tree, when you make the next cut.

This is what I did to that beautiful crabapple tree, and to other crabapples and pears that were also affected. That big crabapple was left looking like I’d hit it with a Bush Hog, but I am happy to report it rebounded quickly the next year, putting on new growth and tons of flowers. In spring 2012, the tree is even bigger and loaded with flowers. So far – knock on wood – I don’t see signs that this spring will be as bad for fireblight here, but it’s definitely out there. I found some on a pear tree today. I’m watching closely, and my shears are at the ready.

Fireblight is a problem throughout North America, so wherever you live, keep an eye on your trees. Don’t hesitate if you see scorched leaves, flowers or limbs. Though it’s tough to take a blade to trees you planted, you can minimize the damage if you act quickly.