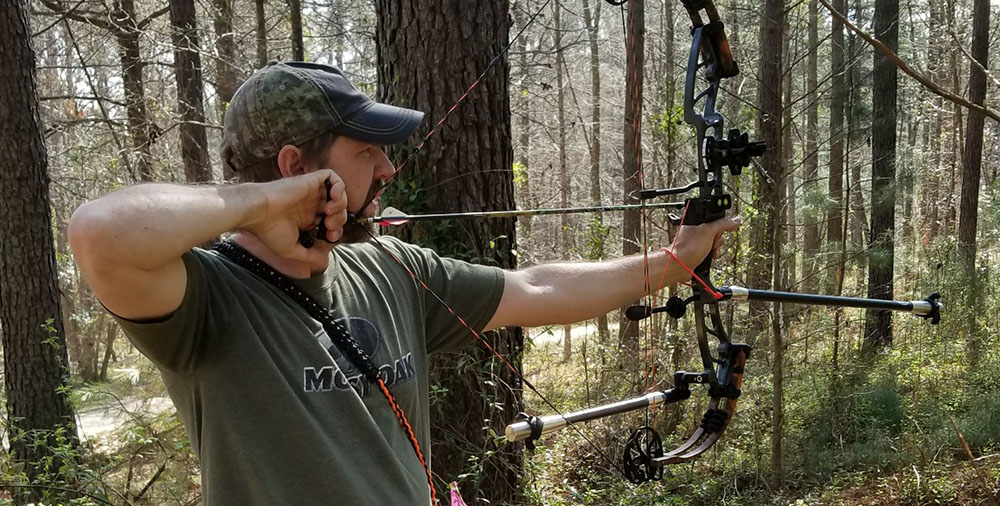 For years I shot 3D archery — typically a few shoots each summer as a way to prepare for the upcoming deer season. And while I always enjoyed the chance to shoot my bow, as well as the camaraderie of competitive archery, for whatever reason I never got serious about it. It wasn’t until my daughter started shooting competitively for the local 4-H program that I decided archery would be a great way for her and me to spend time together doing something we both enjoyed. And since she already enjoyed deer hunting, I also thought it would be an excellent opportunity for her to build her strength and hone her archery skills so she could eventually deer hunt with a bow.

So with this new common interest, I began seeking out local shoots we could attend, and I was amazed by what I found: There was this whole big world of competitive archery happening all around me, and somehow I had never noticed it. Judging by the participation in many of these shoots, I think a lot of other bowhunters are similarly unaware. It didn’t take long for me to become hooked on all the various forms of competition, with each presenting its own set of challenges. The result is a new passion that has all but eliminated those end-of-deer-season blues.

If you’re a bowhunter and have never given competitive archery a try, make this the year. Besides just having something to do during the off season, engaging in competitive archery will ultimately make you a better bowhunter. And don’t let the term “competitive archery” scare you off. Archers of all ages and skill levels participate in these competitions, and many do so just for the opportunity to shoot their bow and the camaraderie. How serious you take the actual competition is completely up to you. Most shoots have multiple classes based on age, sex, equipment and skill level, so you won’t have to directly compete against professional archers with your hunting rig, unless you just want to.

Archery competitions come in all kinds of formats and at all different levels — local, regional, state, and national — so it would be impossible for me to cover every type of shoot you may encounter. What I can do, however, is educate you on the most common types of shoots, what to expect for each, and how to find and participate in these shoots where you live. From there, you should be able to jump right in to any competition you find.

There are three main forms of competitive archery: target archery, field archery, and 3D archery. In target archery competitors shoot at stationary circular targets at various known distances. Within target archery, there are indoor and outdoor shoots, with the primary differences being the size of the targets and the distances at which you shoot. Indoor target archery is popular during the winter months when weather conditions across much of the country make it tough to shoot outdoors. However, it’s not unusual to find local archery ranges hosting indoor shoots year round. 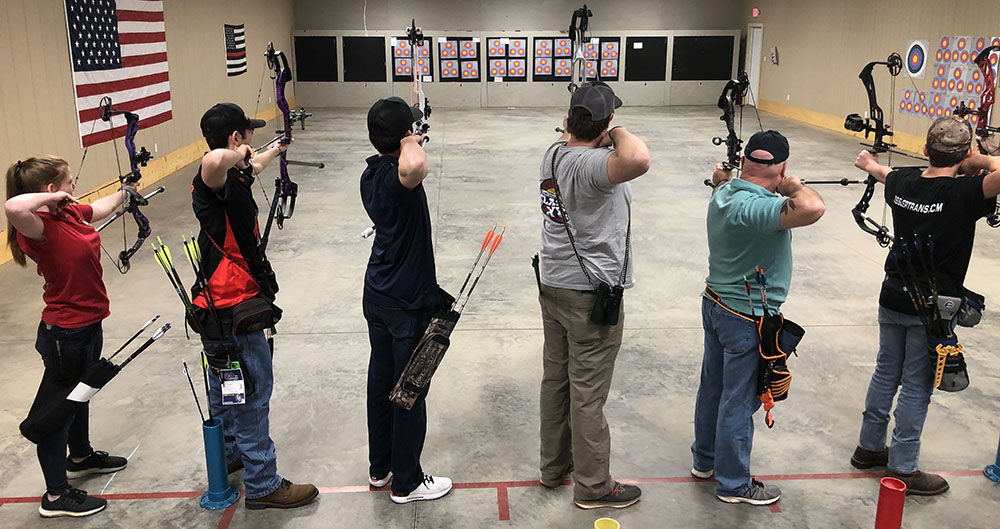 Indoor competitions typically involve shooting at multiple small, round targets on a single target face at a distance of 18 meters (20 yards). The two most popular forms of indoor target archery are referred to as 3-spot and 5-spot, depending on the type of target used. As the names imply, a 3-spot target has three small circular targets on one target face while a 5-spot target has five. While the scoring rings are very similar on both targets, they are scored differently, and each involves shooting a different total number of arrows. In a 3-spot shoot, you shoot three arrows per end (one at each target) for a total of ten ends, or 30 arrows. Since the highest scoring ring is a 10, the highest possible score for 3-spot is a 300. With 5-spot, the archer shoots 5 arrows per end for a total of 12 ends, or 60 arrows. The highest scoring ring in 5-spot is worth 5 points, for a total possible score of 300. Both types of targets have an even smaller X-ring inside of the highest scoring ring, which would be considered a “bullseye.” The total number of X’s shot is used as a tie-breaker. So an archer who shoots a perfect 300 with 25 X’s would beat an archer who also shot a 300 but only 20 X’s.

Outdoor target archery typically involves a single “spot” target. The target’s overall size is larger and includes more scoring rings than indoor targets, because participants shoot at longer distances, as far away as 90 meters. The number of arrows shot at an outdoor target competition is generally greater than that of an indoor shoot, with archers typically shooting six arrows per end for a total of 12 ends, or 72 arrows. And since outdoor targets have scoring rings up to 10, a perfect score would equal 720 points.

For those of you not familiar with 3D archery, it goes something like this: you follow a trail through the woods and/or fields, stopping occasionally to shoot at a foam, life-like animal target placed at a variety of distances. You get one shot at each target and receive a score based on where your arrow hits the target. Most shoots have 20 to 40 total targets ranging from bobcats to bears, to deer, elk and everything in between. Some shoots offer “known distance” classes where you can use a rangefinder to determine the target distance, and some shoots or classes are “unknown” — meaning you have to estimate the yardage on your own and shoot accordingly. Scoring varies depending on the shoot’s sanctioning body.

Field archery could be considered a cross between outdoor target and 3D archery, and is probably the least common of the three main types of archery. It involves shooting at both circular and paper animal targets at distances from 20 feet out to 80 yards. Depending on who’s hosting the shoot, the competitors may shoot at anywhere from 14 to 48 targets, which may be set at known or unknown distances.

Like 3D archery, archers follow a trail system through fields and/or woods, moving from target station to target station to shoot. However, instead of shooting just one arrow per target, field archers shoot four arrows when shooting at circular targets or three arrows if shooting at 2-D paper animal targets. Scoring varies depending on the sanctioning body.

The good news for bowhunters interested in shooting competitive archery is you likely already have everything you need to participate. Yes, you will see archers with decked-out tournament bows complete with long front and rear stabilizers, expensive adjustable target sites, and large-diameter competition arrows, but none of that is necessary to get started. Your hunting bow, hunting arrows with field points, and hunting release will work just fine. The one piece of equipment you may want to invest in before your first shoot is some type of hip quiver to hold your arrows, but even that is not necessary.

What amazed me most when I first got involved in competitive archery was how many shoots I was able to find within an hour or two drive of my house, once I knew where to look. Chances are, there are numerous shoots in and around where you live as well.

Good places to start are local archery shops, particularly those with an indoor range. I found that most of these shops host their own shoots on occasion, if not weekly. If your state has its own archery association, that is another great source for locating local archery shoots. A third way to locate these shoots is through the national sanctioning bodies, such as U.S.A. Archery, the National Field Archery Association (NFAA), Scholastic 3D Archery (S3DA), the Archery Shooters Association (ASA), and the International Bowhunters Organization (IBO). These organizations all host national shoots, but they also act as the sanctioning bodies for state and local shoots, and you can locate these sanctioned shoots through the various national websites.

For me, competitive archery gives me something to look forward to outside of the hunting season. It’s a great way to get out of the house, fellowship with other archers and bowhunters, and sharpen my archery skills. And most importantly, it gives my daughter and me an opportunity to spend quality time together doing something we both enjoy. In the end, we are better archers and better bowhunters because of competitive archery.