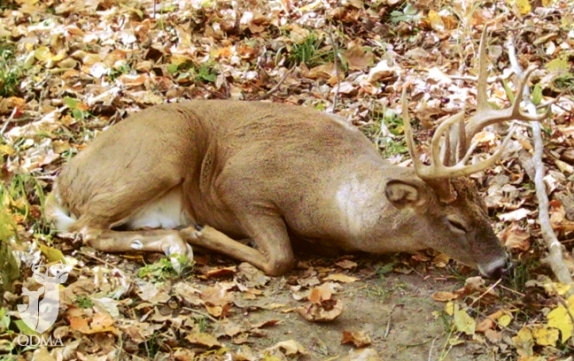 Do whitetails sleep? The quick answer is, “Yes.” In fact, all birds and mammals sleep. Some species such as cattle, horses and sheep may even sleep standing up. The mechanisms of sleep are fairly well established, but the exact reason(s) animals sleep is less clear. Decades of research have only produced clues to the true function of sleep.

Let’s first examine what sleep is and then look at how it applies to whitetails. Sleep is a physiological state of rest that is necessary for survival. Sleep differs from unconsciousness in that sleep includes the capability of arousal, and different species obviously must sleep differently. Predators, for example, can afford longer, deeper periods of sleep. Prey species like deer cannot. For deer, sleep is necessary for health and survival, but so is the ability to be somewhat alert while sleeping. Sleep is a time to rebuild cells and recover from physiological and physical activities that occurred while awake. Finally, sleep can be divided into two general types: REM (rapid eye movement) and NREM (non-REM). For simplicity, NREM accounts for 75 to 80 percent of a human’s sleep time, and REM is the portion where most dreaming occurs.

We now know that all deer sleep and at least have an idea of why they sleep. So, where and how do they sleep? I know deer hunters and biologists with decades of hunting and deer management experience who have never witnessed a sleeping deer. Given a whitetail’s acute senses and sleeping habits, it is not surprising that most hunters and biologists have never found a sleeping deer in the wild.

It is difficult to study the sleeping habits of wild deer, and there is scant scientific literature available on the subject. Therefore, I interviewed two of the foremost authorities on deer behavior, Charles Alsheimer and Dr. Leonard Lee Rue III. They are household names to whitetail hunters throughout North America, and they have collectively spent nearly 100 years working with deer. Each has spent thousands of hours observing both captive and wild deer behavior. Both have seen deer sleep with their heads in a variety of positions and with their eyes opened and closed. Charlie has observed hours of sleeping deer and says they sleep with their eyes open more often than closed, and when their eyes are closed it is generally for periods of less than five minutes.

Deer sleep anywhere they bed and may do so singly or in groups. According to Charlie, they are creatures of habitat and they may bed in the same location day after day and month after month. Dominant bucks have favorite bedding spots, and they’ll even kick subordinate bucks out of a bed. Deer will tuck their nose under their hind legs during cold weather, lay it on their side or over their shoulder during warm weather, lay with their head up, and even lay their chin on the ground in front of them (just like the Indiana buck pictured above that was captured on a trail-camera by QDMA member Tom James. The buck spent 17 minutes snoozing in the middle of a scrape). Their head position changes many times during a sleeping bout, and they even “bob” their head as they relax and their head slips toward the ground. Deer may lay with their front and back legs tucked under them, their back legs tucked and front leg(s) extended and even on their side with all of their legs extended.

This article is an excerpt from QDMA’s Quality Whitetails magazine. Join QDMA today and start getting the entire magazine in your mailbox!

A typical sleeping bout includes 30 seconds to a few minutes of dozing, followed by a brief alert period, and then more dozing followed by an alert period. This cycle often lasts for about 30 minutes. Generally, once per 30 minutes deer will stand and stretch and they may urinate or defecate before laying back down. They may even stand, urinate in their bed and lay back down in it. This 30-minute cycle of rest and standing has also been reported in the literature for axis deer.

Deer spend the majority of their time bedded. The exact amount varies seasonally as deer spend less time bedded during the rut and more time bedded during winter, at least in northern environments. While bedded they “chew their cud” to regurgitate, rechew and digest their food. They also groom themselves and doze or sleep. They may chew their cud with their eyes closed, and grooming consists of licking and cleaning themselves, including their interdigital glands (between the hooves). Dr. Rue has observed bucks curling their lips while sleeping. He also has video of eyes fluttering and contends this is REM sleep and that it suggests deer can dream.

Whether dozing or sleeping with eyes open or closed, deer are continually monitoring what is going on around them. Their ears are never lowered, and they can wake up instantly. Dr. Rue feels their ears may even be more important than their nose while they are sleeping. Charlie says bedded deer are very cognizant of what goes on around them with regard to squirrels and turkeys. Their senses are so incredibly keen that they can distinguish between squirrel activity and a snapping branch.

Is it easy to sneak up on a sleeping deer? Charlie would laugh at a hunter who claims he or she can approach to within close range of a sleeping deer. Charlie says a hunter may shoot a deer in its bed but contends the deer knew the hunter was there. The deer may have felt it was hidden or the hunter wasn’t a threat (I’m pretty sure I hunt with some guys who aren’t perceived as serious threats by deer).

Dr. Peter Pekins from the University of New Hampshire has conducted research on captive and wild deer for nearly 30 years. He agrees with Charlie’s claim under most circumstances. The one exception is the rare occasion when weather, terrain, ground cover, wind direction and deer bed location all align perfectly for a hunter. Dr. Pekins said he wouldn’t believe you could approach a sleeping deer in the wild if he hadn’t personally done so. He walked to within 25 yards of a doe lying prone with her eyes closed and her head stretched out on the ground in front of her. She had all four legs stretched out to her side and appeared to be dead. Dr. Pekins approached the doe which was upwind and down a slope from him by sneaking along a trail covered with wet debris and leaves. It was hunting season and he had a doe tag but thought the doe was dead because of the way she was lying and because she didn’t move. At 25 yards Dr. Pekins stopped sneaking and took a normal step. The doe jerked to attention and took off before he could shoulder his rifle. Dr. Pekins said it was a one in a million chance that he approached the doe to such a close distance, and added he was only able to do so because of the perfect terrain, weather, wind and sneaking conditions and the poor bed selection by the doe.

So, can you expect to catch a wild deer sleeping? It’s unlikely you’ll do so by sneaking up on one, but it is entirely possible to do so from a distance. Your best chance is to do so while on stand by having deer move into view and bed down. Since they can sleep with their eyes open, you may even have witnessed it in the past without realizing it.