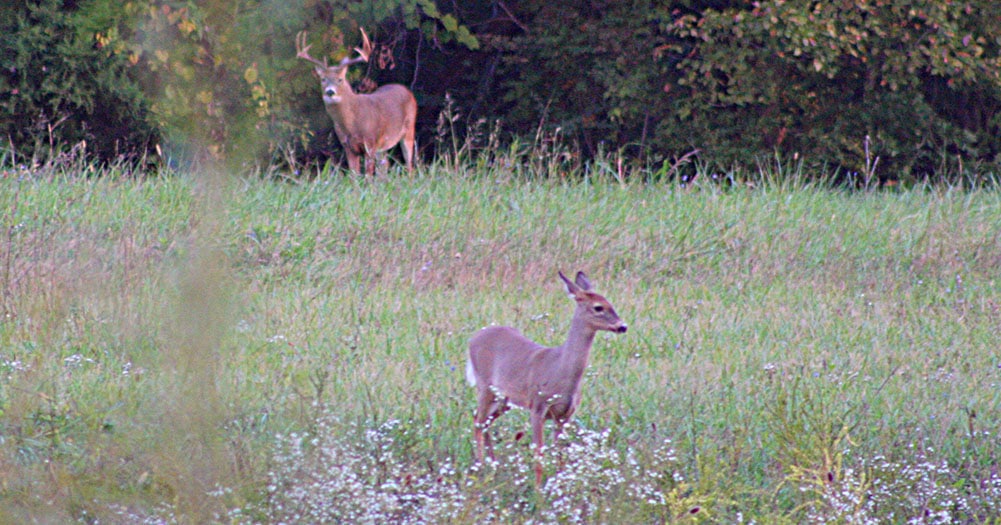 Every year about this time, questions and concerns about the rut start popping up on social media.

“Will the rut be early this year?”

“Think this cold snap will get the deer rutting?”

“I hope this warm spell doesn’t shut the rut down.”

“Are we going to have another trickle rut this year?”

It’s understandable why us hunters get so excited at the prospect of the rut. The thought of big mature bucks dropping their guard to chase does, possibly right past our stand, is enough to get even the most casual of deer hunters fired up. To me, there is no better time to be in the woods! But there is no need for that excitement to turn to worry or concern. The rut WILL happen, and you don’t need any special calendars, algorithms or apps to figure out when!

What triggers the rut?

Decades of data collection by state wildlife agencies, as well as plenty of university research, has revealed that for any given area, the peak of breeding occurs at approximately the same time every year. It is not influenced by moon phase, weather changes or planetary alignments. Photoperiod (length of daylight) is what triggers does to come into estrus, and the does are what dictates rutting activity. 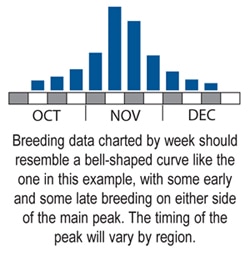 So while we know the peak of breeding occurs at approximately the same time every year, that is not to say ALL breeding occurs during that brief window of time. Some does will come into estrus early, and some will be late. Does that are not bred during their first estrus cycle will come back into estrus approximately 28 days later, and some fawns can come into estrus if they reach a certain weight, which typically occurs later in the year. If you were to plot doe estrus times for any given area on a graph, it would create a nice bell shaped curve like the one seen here. As you can see in this example, the vast majority of breeding takes place the second and third week of November, but starts as early as the second week of October and continues well into December. Of course, the specific dates will vary depending on your location. While the dates on this graph apply to many northern and midwestern states, the timing of the rut varies greatly in the South. 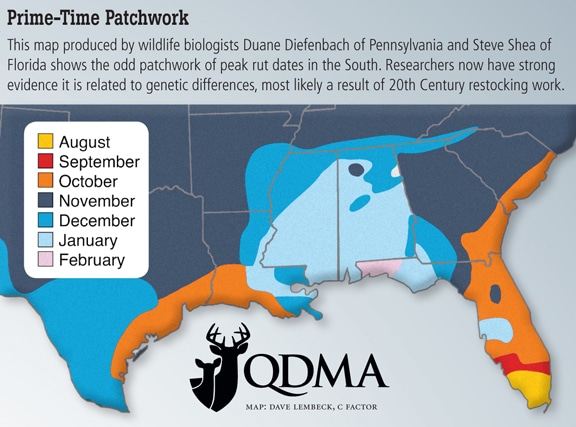 Why the disparity among hunters?

This bell-shaped curve is a great example of how hunters within the same county or even on adjacent properties can each have completely different perceptions of when and how good the rut was any given year. For example, if I happen to be hunting in the right place at the right time when one or more of the does comes into estrus a week or two prior to the traditional peak breeding dates, I might see see a flurry of early chasing or rut activity. That may lead me to conclude the rut was “early” this year. However, if my neighbor didn’t happen to witness this early activity but only saw rut behaviors at the traditional time or even a little late, he’ll likely be left with a completely different take on things.

Hunters may also perceive the rut differently depending on how much rut activity takes place at night versus during the day, or how much takes place outside the view of your deer stand. Just because you aren’t seeing rut activity doesn’t mean it’s not occurring. You also have to take into account that a doe is only in estrus for 24 to 48 hours, so if you are only hunting weekends, you may have missed a flurry of rutting activity that occurred during the week. All these factors combined can make each hunter’s perception of the rut highly variable. It is really dependent on being in the right place at the right time.

How to hunt the rut

So, what is the best course of action for a hunter wanting to ensure they get a crack at a big, mature, rut-crazed buck? The first step is to check with your state wildlife agency to identify when peak breeding occurs in your area. They may give you a specific date or it may be a range of days. Keep in mind this is an average across the state, region or county, depending on how it was calculated. Since peak breeding dates can vary locally, you may want to factor in some data of your own. For instance, you should consider when you have traditionally seen the most rut activity from the deer stand. If you have trail-cameras available, you could conduct a passive survey to help determine peak breeding dates, though you will have to monitor the cameras closely or by the time you detect peak breeding, it will be too late to take advantage of your intel.

With this knowledge in mind, the best way to tip the odds of killing a mature buck during the rut is to be in the woods as much as possible during a two to three week period surrounding those peak breeding dates, with your main focus being on the week leading up to those dates. And even if you haven’t been seeing mature bucks from the stand or on camera, don’t give up! Research has documented that many bucks make excursions this time of year, sometimes traveling several miles. So you never know when a new buck may make an appearance where you hunt, but you have to be in the stand to take advantage of the situation!

On a broad scale, the rut will occur this year the same time it did last year and the twenty years prior. The weather won’t affect that, and neither will the moon phase. Locally, however, you could see some variation. Don’t assume what you’re seeing applies to others in your area or vice versa. Just get in the woods as much as you can in the days and weeks surrounding the peak of breeding, and hopefully you’ll get to wrap your tag around the antlers of a rut-crazed buck!