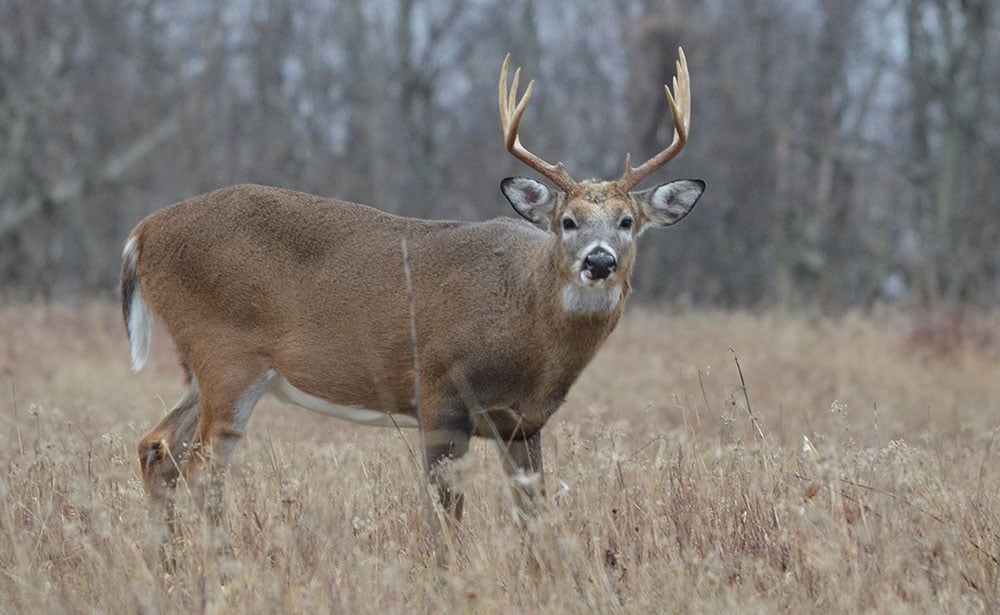 If you follow the QDMA on social media or keep up with the content we share on our website and in our magazine, you know that we are putting a lot of emphasis on the seriousness of chronic wasting disease (CWD). We want hunters to understand the disease and the implications it could have on the future of deer hunting. We’ve also been trying hard to give hunters actionable items we can all do to help fight CWD. Inevitably, though, when we share CWD-related content on social media, people question why they aren’t seeing mass die-offs of deer from CWD like sometimes occurs with hemorrhagic disease (EHD), or they’ll go as far as saying EHD is a more serious disease. That simply is not true. While EHD is serious, there is no greater threat to the future of white-tailed deer than CWD. Deer herds recover from EHD’s sudden strikes, but CWD is slow and takes years to erode a herd’s ability to sustain hunter harvest without declining. Let’s take a deeper look at the differences between these two diseases.

EHD is a virus spread by a small midge (small gnat-like insect) and strikes during a fairly narrow season of time — typically during summer and early fall when the midges are most prevalent. Deer across much of the whitetail’s range are impacted by EHD to some extent every year, with occasional large-scale, severe outbreaks like we saw in 2007 and 2012. Unlike CWD, EHD cannot be spread from deer to deer. Deer that contract EHD can die quickly, struggle for weeks before dying, or fully recover. It is not always fatal. Those that survive develop resistance to the strain of virus they contracted, and resistant does can pass temporary resistance to their fawns. When the first hard frost occurs, the midges die off and the outbreak ends. At this point, it could be a decade or more before that area experiences another significant outbreak.

Some years EHD can have a major impact on localized deer populations, and that is when hunters experience finding numerous dead deer along creeks and around lakes, ponds and other water sources. It can be devastating, but deer numbers eventually rebound.

By contrast, CWD is a slow killer. It doesn’t strike quick and leave deer piled up in a short period of time like an EHD outbreak. In fact, it typically takes two or more years for a deer with CWD to die from the disease. In most cases, infected deer won’t show any clinical signs for well over a year, so once a deer contracts CWD, it may spend the next year or more appearing healthy, but shedding prions, potentially spreading the disease. Because of this extended incubation period, you cannot look at a deer and tell if it has CWD.

While EHD is serious, there is no greater threat to the future of white-tailed deer than CWD.

Due to its slow nature, many deer with CWD die of other causes before actually succumbing to the disease, whether by natural occurrence or due to their diminished capacity. Think of it this way: If a person suffering from dementia wanders away from home and freezes to death, did they die from dementia? Technically, no. But dementia was certainly the primary contributing factor. The same is often true with CWD-positive deer that ultimately die from predation, hunting, vehicle collisions, or other illnesses such as pneumonia, as was the case with this deer. That doesn’t make the disease any less serious. If these deer hadn’t died in one of these “natural” manners, CWD would have certainly taken its toll. It’s important to realize research shows deer with CWD die at two to three times the rate of deer without the disease annually, and anything that doubles or triples the annual mortality rate means the herd cannot sustain as much mortality from other causes – like hunting – without declining.

Even if a deer does live long enough to actually die from the disease, the likelihood of someone finding it and having it tested before it’s been scavenged or rots, is slim. Make no mistake, though. CWD is 100 percent fatal, and it’s killing deer both directly and indirectly. I’m not aware of any credible biologists or wildlife disease pathologists who would argue that point.

Fortunately, in areas with a low prevalence rate of CWD, much of the loss from the disease is masked by the “natural” mortality factors mentioned above. In other words, in any given population, you are going to lose a percentage of the deer every year to hunters, vehicle collisions, predators and disease. And since many of the CWD-positive deer will actually fall into one of these “natural death” categories, you don’t see a lot of additive mortality from the disease. However, as CWD prevalence rates increase, eventually populations will not be able to sustain the same level of hunter harvest without population decline. In fact, a 2016 Wyoming study of white-tailed deer showed that at a prevalence rate of over 27 percent, the population will start to decline if hunting pressure isn’t reduced. When we start to see those levels breached, state wildlife agencies will have no choice but to reduce bag limits and/or shorten deer seasons to compensate for CWD loss.

We are quickly approaching those levels in states like Wisconsin, where CWD has been confirmed for approximately 17 years and the prevalence rate of CWD in the western monitoring area has grown from 8-10 percent to 35 percent in adult bucks and from 3-4 percent to over 15 percent in adult does. In certain areas, CWD prevalence rates in adult bucks have topped 50 percent. Wrap your head around that. Over half of the adult bucks in those areas are walking around with a 100 percent fatal disease.

We should note that prevalence rates are not climbing this rapidly in every outbreak zone. Some states, such as Illinois which has had CWD almost as long as Wisconsin, have been successful at maintaining prevalence rates in the low single digits for many years. This means deer herds in those Illinois zones will continue to be able to support hunter harvest much longer.

So, how many deer have actually died from CWD? Yeah, we hear that question a lot. The truth is, we have no idea. The same way we have no idea how many deer have died from EHD, brain abscesses, vehicle collisions or poaching. But make no mistake, deer are dying from CWD, both directly and indirectly. Are there still a lot of unanswered questions? Absolutely! Are our current methods of slowing its spread going to help? Only time will tell. But we have to do something. We can’t just sit idly by and watch it spread across the entire whitetail range. That’s why QDMA is promoting simple, common sense steps to slow the spread:

And it’s also why QDMA has committed $1 million over the next five years for research, on-the-ground management and technical guidance for white-tailed deer. Research is critical in finding a cure for CWD.

Yes, EHD is serious, and scientists are continuing to monitor and study the disease. But there is little we as hunters can do to help. It is largely dependent on weather factors and midge populations, which are beyond our control. We can, however, do some things to slow the spread of CWD while researchers work toward a cure. Now is the time for us to band together as hunters and stewards of our wildlife resources and fight the most serious threat white-tailed deer have ever faced. Will you do your part?