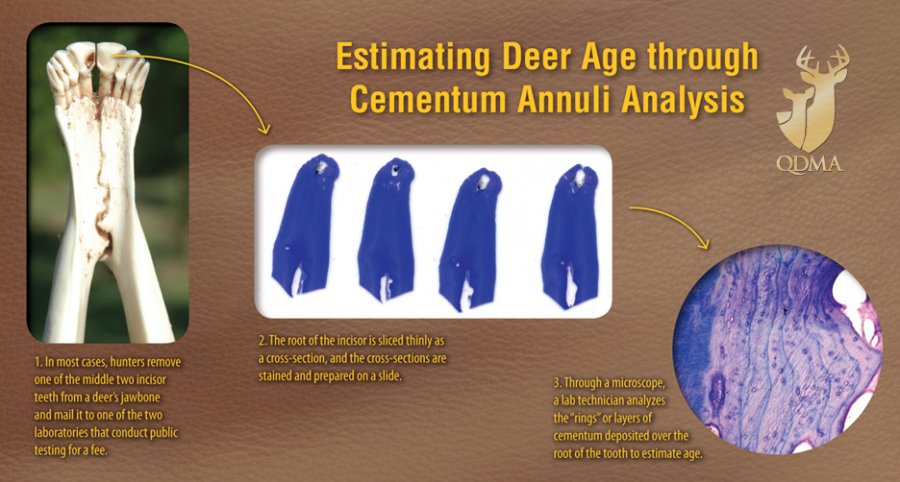 The cementum annuli (CA) aging technique is based on the annual addition of cementum, a specialized calcified substance deposited on the roots of teeth in many mammals. Layers of cementum produce “rings” similar to those in trees. A darkly stained ring, or “annulus,” is formed during winter stress, whereas lightly stained rings are formed during spring and summer. Because winters are milder in the southern U.S., the dark winter annuli often are less distinct, which can affect accuracy.

Previous research has revealed that the accuracy of the CA technique far exceeds that of the tooth replacement and wear (TRW) technique after age 3½. However, through age 2½, TRW is more accurate than CA. Be sure to download our free guide to the TRW technique. Both techniques are roughly equal in accuracy at age 3½.

The high degree of accuracy obtained from the TRW technique in young deer can be attributed to the tooth replacement portion of the technique. From birth until about 20 months of age, whitetails gain new teeth and replace temporary or “milk” teeth with permanent ones in an established order. This allows trained observers to assign deer to three age groups – fawns, 1½, and 2½-plus – with great accuracy.

The reasons why CA is more accurate than TRW after age 3½ also are clear. First, there are relatively few people trained in this technique, thus reducing potential observer bias. Second, tooth wear in deer, like humans, is highly variable, and this variation increases with age. Finally, the CA technique is not influenced by habitat quality as can occur with the TRW technique.

Despite the advantages of CA, especially with older deer, there are a few drawbacks. Unlike the TRW technique which can be done at the hunting camp, the CA technique requires samples to be submitted to a lab, with results often taking several weeks or months. Additionally, with sufficient numbers of samples, the costs can add up.

Matson’s Laboratory charges a minimum fee of $60, which includes aging up to five deer. With six or more samples, the cost is $10.50 per sample, or less, based on quantity.

Wildlife Analytical Labs, the only other lab open to the public, charges $25 per sample up to four or $18 each up to 50.

Determining which aging technique is right for you depends on many factors. In most situations, the TRW technique, if applied correctly and consistently, is adequate for most management situations. This is because most deer harvested are typically 4½ years of age or younger, ages in which the accuracy of the TRW technique is satisfactory. However, if you are in a program where bucks commonly reach 5½ to 7½ years of age, the CA technique may be a better choice than TRW.