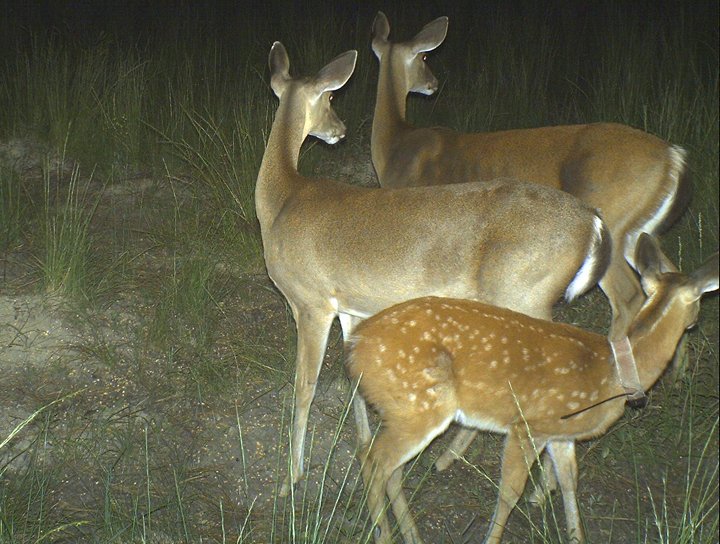 We’re about to reach a busy time period in our fawn-survival research at Ichauway, and before I begin reporting on the actual field work, I thought I would give you a look at the planning and care that must go into capturing and handling wild fawns.

When wild animals are captured for research, there are many considerations that must be taken into account before the animal can be released. These considerations help ensure that the animal’s subsequent behavior is not influenced by the unavoidable stress from capture. In the case of newborn fawn capture, not only do we as researchers need to take the well-being of the fawn into consideration, we must also consider the status of the doe.

When a newborn fawn is first discovered by a researcher such as myself (for example after a VIT is recovered at a birth site), it is both exciting and nerve wracking. We try our best to keep our scent off the fawn, so we put on surgical gloves before any work begins. When picking up the fawn, we are careful to keep it away from our bodies. We determine the fawn’s gender then place it in a bag to be weighed. Once it is weighed and sexed, we slip a tracking collar over its nose to rest comfortably around its neck. These tracking collars are designed to expand as the fawns grow, and the collars eventually fall off (You can see one of the collars on the fawn in the trail-camera photo that accompanies this article. This photo was taken last October at Ichauway and shows a fawn captured last summer).

This entire sequence should take no more than five to 10 minutes, with care being taken to minimize talking (and bright lights if we’re working at night). These actions may seem trivial to some, but when it comes to defending scientific research, this level of care will allow me to confidently say that we did everything possible to minimize influencing the fawn’s behavior.

More importantly, there has been speculation and varying opinions over the last few years pertaining to what researchers call “capture-induced abandonment.” Because we are capturing fawns that are literally hours old, there is speculation that some does may not have completely “bonded” yet with their fawns, and the capture event may freak them out (for lack of a better phrase) to the point that they abandon the fawn.

Just about a week ago, I had a very in-depth conversation about this topic with a fellow graduate student named Colter Chitwood, who is studying to get his Ph.D. at North Carolina State University. He and I are working on similar research projects, and we took the opportunity to discuss our experiences finding fawns that had, by all definitions, died of starvation. Although it is never a positive experience to find a fawn that has died this way, it forces you to think about the cause. This of course brings me back to the topic of “capture-induced abandonment.” Colter shared with me that he had several sets of twins in his study this year where one fawn died of starvation and the other continued to live. In such cases, it seems unlikely that the effects of capture could have impacted only one fawn from the set of twins. Thus, Colter and I agree that researchers cannot say with certainty that a capture event was the cause of a fawn’s abandonment, particularly when the nutritional status (or health) of the doe is not known.

It is a well-known fact in most wildlife species that feeding and protecting young imposes a huge strain on the health of the mother. The energy demands on a whitetail doe are much higher due to lactation and protecting her fawns, and to compensate she must increase her foraging. Mother-young behavior in white-tailed deer has been a highly studied topic over the past few years, but there still are a lot of questions to be answered. Some of these questions include: why are some mothers more successful at raising fawns than others? Why would a doe abandon one fawn and stay with the other? Unfortunately, in my particular study I will not be able to fully answer these questions, but it’s important to think about them since the doe is such an important part of the equation in fawn-survival research.

Stay tuned to QDMA.com for more reports from the field as our fawn-survival study moves forward!