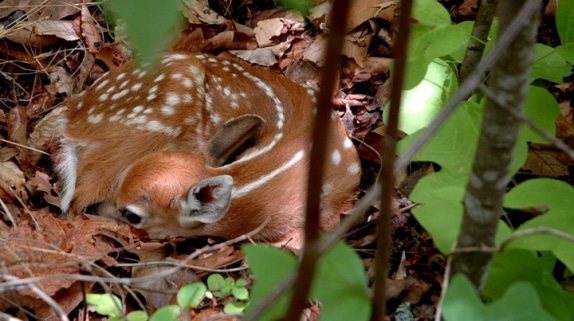 White-tailed deer are one of the most researched animals in the United States because of their high value as a game species as well as the impact they can have on an ecosystem, and yet there seems to be a never-ending supply of new questions to answer about deer. Currently, hunters and many deer researchers are very interested in this question: How do coyotes affect whitetail fawn survival? As a master’s student who is a member of the UGA Deer Lab at the University of Georgia, I’m hoping to help answer that question. QDMA has offered me a unique opportunity to  share my research activities as they occur, which will also give you the opportunity to see what goes into a whitetail research project. Why do deer researchers decide to record certain pieces of information? What are some things that can happen while researchers are out in the field collecting data? In coming weeks on QDMA.com, I’ll be giving you an inside look at deer research.

Before I tell you more about my research project, it may be helpful to know where I came from and how I became a deer researcher.

I grew up in a small town in Vermont, and like many other animal lovers I thought I wanted to become a veterinarian. I attended the University of Vermont as a Pre-vet major, and although I loved learning about things like animal physiology and nutrition, something was missing. I began taking elective courses in wildlife sciences, and during my final year of my undergraduate degree a friend urged me to take a course with her called “Suburban Deer Management.” At this point in my life I only knew two things about deer: They have the same digestive tract as cows, and people hunt them. Although I did not grow up hunting, I was excited about the course and went into it with an open mind. The course was taught by a state deer biologist and was conducted weekly on a plot of land near campus with a deer population problem. We conducted browse surveys and spotlight counts and had very in-depth discussions about deer behavior and methods of population control. I even got the opportunity to volunteer at a state-run check station during deer season. After the course concluded, I knew I was hooked.

I had found my calling in life, but following any dream never comes easy. Following graduation with a bachelor’s degree in Animal Science and Biology, I knew I had to get as much experience with wildlife and deer as possible to make up for my lack of course work. For the next three years I took various jobs around the country working with animals ranging from shorebirds to sage-grouse and white-tailed deer. I worked in New York on an immuno-contraceptive darting program, as well as in South Carolina on a fawn mortality study lead by Dr. John Kilgo. In January 2011, I took a technician position at the Joseph W. Jones Ecological Research Center at Ichauway in southwest Georgia. Upon arriving at the center I met a UGA graduate student, Mike Cherry, who was researching deer-coyote interactions. I began volunteering with him as much as possible in my free time while working full time in Dr. Mike Conner’s Wildlife Lab. As my time at the Jones Center progressed, and Mike’s project began to grow and change (as with most masters research), he realized that this growing project would need more funding.

Upon obtaining the proper funding from the Georgia DNR Wildlife Resources Division, it was decided that I would begin as a graduate student.  Mike and I agreed to collaborate and continue with the work he started, all while expanding upon both of our separate research interests. I cannot express how good it felt to me to be able to take the lead on my own research project.

My masters thesis consists of researching the effects of coyotes on white-tailed deer fawn survival. Additionally, I will look at fawn behavior within the first few weeks of life, specifically investigating differences in behavior between male and female fawns, how their movements change as they age, and most importantly bed site selection. Whitetail fawns are quite helpless when they are first born and rely almost solely on hiding in thick vegetation to escape the detection of predators.  I believe that if I can find a connection between certain characteristics of vegetation at fawn bed sites and their survival, it will surely help with deer habitat and population management in the future.

This past winter we collared 18 mature does and fitted them with vaginal implant transmitters (See the photo in the Gallery below). These transmitters will allow us to capture fawns literally hours after they are born. So far, we have caught and fitted tracking collars on four fawns. At the Jones Center, there is a later rut and fawning season in comparison to other regions. Overall, things are starting to get busy down here, so stay tuned to QDMA.com for updates as our field season progresses!

(By the way, I went deer hunting for the first time in fall 2011. I didn’t get my first deer, but I’m determined to next season!)

Part Two: How to Capture a Fawn