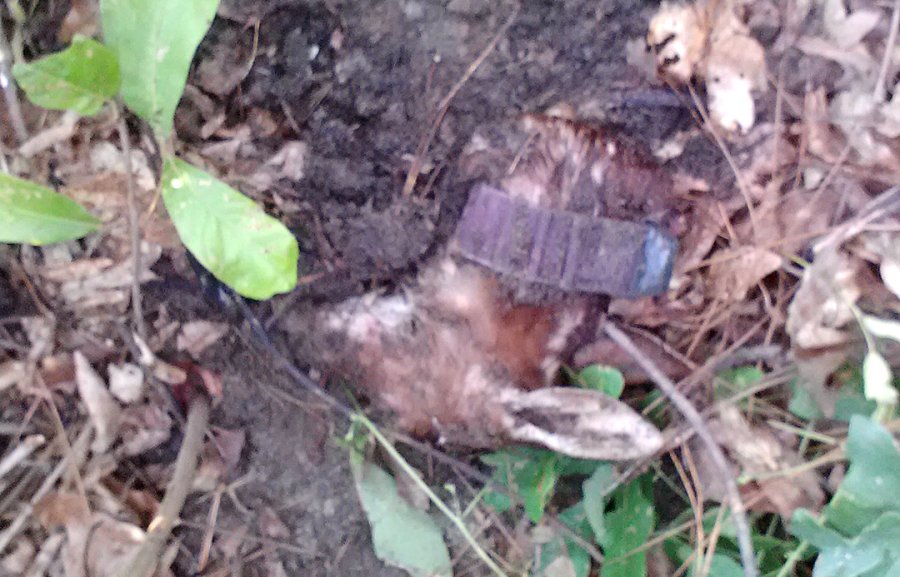 There is a critical window early in the lives of fawns when they are highly vulnerable to being killed by predators. After they reach a certain age they can outrun most anything, but until then we as deer researchers must monitor them closely, because death in the form of a predator could appear at any moment. The fawns I have captured this season are being monitored diligently by our technicians, which has allowed me to report to you that we have had our first few “mortality events.”

How do we detect that a fawn has died? As I mentioned in a previous posting, when we capture fawns we fit them with radio tracking collars. These collars are equipped with a motion-activated mortality sensor. If a fawn has been motionless for a set period of time (in a fawn’s case it is four hours), the collar will go into mortality mode and tell us the animal is dead. In my research I am trying to identify the cause of death, so it is very important to detect these mortalities as soon as possible. This gives us the best chance of using the evidence at the scene to determine how the fawn died. You can call it “Fawn CSI.”

When following up the signal of a dead fawn’s collar, all of the technicians on our project are instructed to note any and all animal sign or evidence at the scene which may aid us in identifying the cause of death or predator responsible. They look for things like fresh scat, claw marks on downed logs or branches, and fresh digging. If there are any fawn remains, we look for the presence of blood, puncture wounds from bites, and most importantly hemorrhaging in the bite wounds (Hemorrhaging or bruising around a bite wound means the fawn’s heart was still beating when it was bitten. If there is no hemorrhaging or bruising, the predator was likely scavenging a fawn that died of other causes).

Unfortunately, sometimes when we walk in on a mortality site we find only a collar sitting on top of vegetation, or rain may have washed away some or all of the evidence. In these cases we look for potential bite marks on the collar and other disturbances in the area to help us determine if a predator was involved, and if so, what kind of predator.

Now, it’s your turn. I’m going to give you details about one of our recent mortality events. Consider the evidence and let me know your theories about what happened.

While our team was doing routine monitoring of neck collars and vaginal implant transmitters (VITs), we discovered that one of our does had expelled her VIT and given birth. After going in and successfully capturing and collaring two littermates, a buck and a doe, we began diligently monitoring them along with our other fawns to track their movements. Approximately one week after we had captured the two littermates, at around 5 p.m. in the evening, one of their neck collars began emitting the “mortality signal.” Technician Rob Dukes had confirmed both fawns were alive that morning, so it had only been a few hours since this fawn had stopped moving.

Rob followed the collar’s signal. At the point where the signal was loudest, he noticed the soil was freshly disturbed. After digging a few inches in the dirt (which was not difficult because the soil was quite loose) he discovered the severed head of the fawn he was looking for, buried with its tracking collar still around its neck. Unfortunately this was the only evidence found at the site, indicating the culprit had more than likely killed the fawn elsewhere and moved the head to this new location.

Back at the lab we found puncture wounds on the top of the skull. Hemorrhaging was evident.

We chalked this mortality up to a probable culprit. I’ll reveal the identity of our predator suspect in my next article, but until then I want to hear your analysis of the crime scene. What killed this fawn? Share your thoughts by commenting below.