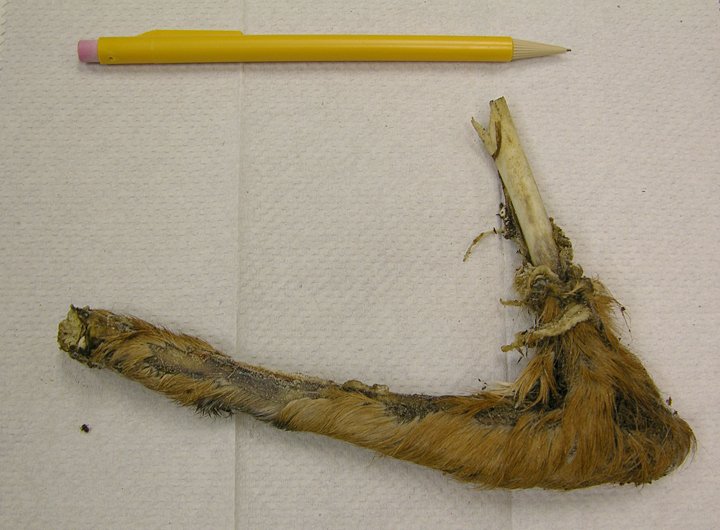 As predicted, things have really picked up in our fawn-survival research, and we have reached what I perceive to be peak fawning season at the Jones Center in Georgia. Our technicians have been working tirelessly to monitor our radio-collared fawns, catch more fawns, and monitor the vaginal implant transmitters (VITs) still deployed in our remaining pregnant does.

This past Sunday morning around 9 a.m., I received a call from one of our technicians, Rob Dukes, who told me one of the remaining VITs was transmitting a signal, indicating one of our does had given birth sometime in the past few hours. I raced out to the site with one of our student workers, Kelsey Turner, and she and I got to work with Rob looking for the fawns (Due to the high-quality habitat and low deer density, most does on the Jones Center give birth to twins, so we always assume we are looking for at least two at each birth site).

After giving birth, a doe will quickly clean the new fawn (or fawns) and then almost immediately move them from the birth site. Whenever we locate a VIT at a birth site, we then trace the signal of the doe’s neck collar and determine her location. We then assume the fawns are located somewhere between the doe and the birth site, and the search begins. We split up and start looking essentially for two needles in a haystack.

At night we can use thermal cameras to aid us in our search, which reveal heat sources, but these cameras are pretty useless during the day when the ground temperature is quite high. So, this past Sunday morning, we put in a good effort to search for the fawns without a thermal camera, and I thought that if the daylight search was unsuccessful we could return at night and take another look when the ground temperatures were cooler.

As the search progressed, we walked separate transect lines, looking under bushes and beside trees. At one point I even stepped up on a fallen log to take a look around. Looking down at the ground, I got excited for a moment when I noticed an area where the vegetation had been freshly matted down as if an animal had been there. Then I noticed a tiny fawn leg and some accompanying bone fragments lying on top of the vegetation. Given how close I was to the birth site and the low rate of decomposition (only a few fire ants had found the leg, and there was still quite a bit of flesh and hair attached), I was reasonably certain that I had found one of the fawns we were looking for. In the South Georgia heat, fawn remains decompose rapidly. This birth event had now become a mortality event.

We decided to end our search for the assumed twin and return that evening. Although we never found a twin from this birth site, the situation led me to think about the critical window for survival in newborn fawns. Previous research has found that fawns are at their most vulnerable to predators in their first few hours and days of life. Each day they survive, their likelihood of surviving longer increases. When we as deer researchers sometimes capture fawns “opportunistically” or randomly that are already a few days old, could our resulting survival estimates be high because we missed that first 24-hour window when fawns are incredibly vulnerable to predators? This is the kind of question that must be taken into consideration when you set out to fill gaps in scientific knowledge with accurate and reliable theories.

Our work continues. Stay tuned for more reports from the field in our ongoing fawn-survival research!