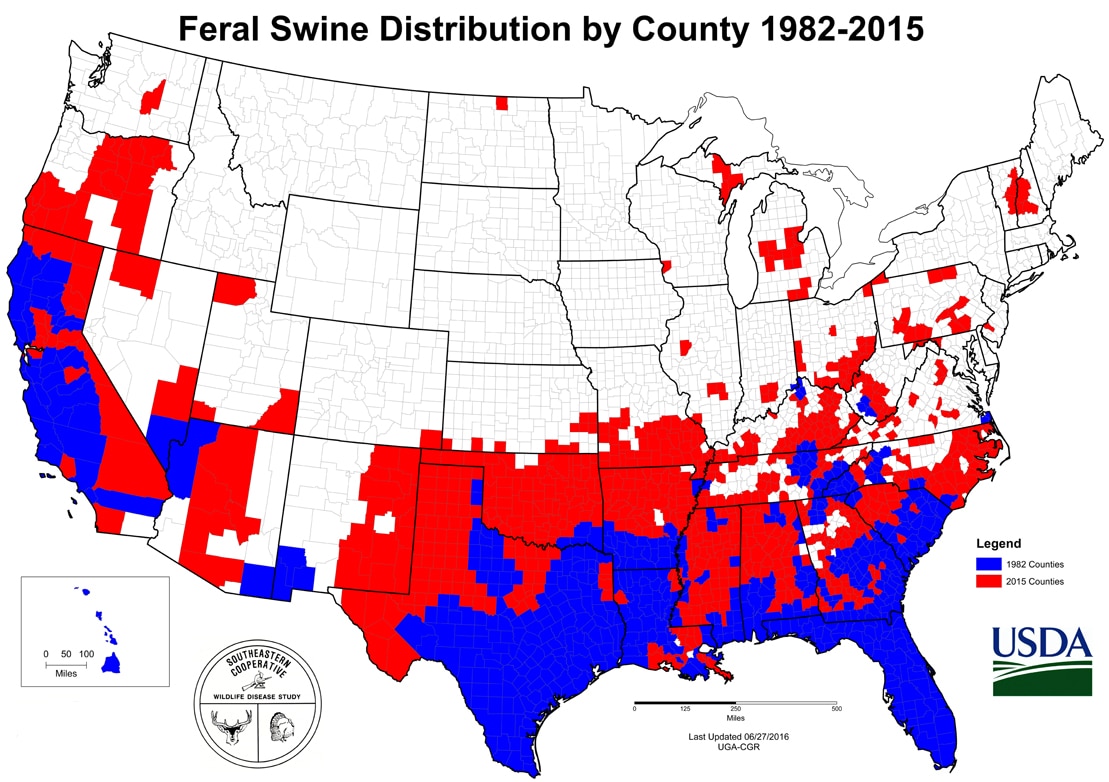 There’s a wildlife disaster walking your way. Or, instead of walking, it may have wheels under it. I’m talking about feral hogs, and if you don’t have them where you hunt, give it time. Hogs are gradually expanding their range, as you can see in the map above released this summer by the Southeast Cooperative Wildlife Disease Study (SCWDS).

The map shows counties with established feral hog populations reported in 1982 (blue) and more recently 2015 (red). Notice how hogs have completely filled in almost all Deep South states in that time, and they’ve made much progress in their steady march northward. Notice also the outlier populations like those in Michigan, Virginia, Pennsylvania and other states. Populations like these were not established through natural hog movements but through transportation and release of feral hogs, most likely deliberate.

“Urge your state wildlife agency and your state legislators to ban transport and release of live feral hogs in your state – if it’s not already illegal.”

Why should you care? If you love to hunt and manage whitetails, you cannot also love feral hogs. They directly compete with deer for food like acorns and soft mast. Research even shows that deer avoid hogs, so it’s not even a competition: Hogs control the best food sources, and deer get the table scraps later. Hogs uproot food plots, sometimes raiding them for the seeds you just planted. They dig craters that are large enough to damage farm equipment. Hogs ruin forest roads, steal bait intended to attract deer to your trail-cameras, raid turkey nests, and generally destroy the deer habitat you’ve worked to build. They even foul the water in small ponds and wetlands, creating the kind of low-quality mudhole that is ideal breeding habitat for the flying gnats that spread the EHD virus among deer.

With the release of this new map, Dr. Joe Corn at SCWDS estimates there are now over 9 million feral hogs in the United States. This means approximately one feral hog for every three whitetails. According to Texas A&M AgriLife Extension, feral sows reach sexual maturity at 6 to 8 months of age and produce 1.5 litters per year on average, with six piglets in each. This high reproductive rate is why experts say you must remove 50 to 70 percent of a local hog population annually – with most of those being sows and juveniles – to bring them under control.

This can be very difficult, as anyone who has tried to control feral hogs will tell you. Therefore, prevention is as important as control. What can you do to prevent this problem arriving in your woods? Stopping the transport and release of live feral hogs is critical. Urge your state wildlife agency and your state legislators to ban live transport and release of feral hogs in your state – if it’s not already illegal. If you pass a trailer loaded with feral hogs on the highway, or learn of someone in your area moving and releasing live feral hogs, call your state’s poaching hotline or other law enforcement immediately.