I settled into my stand with favorable weather conditions and plenty of optimism for an early season September bowhunt in the rolling hills of Eastern Ohio.

As the sun dipped below the horizon, I heard a branch crack to the right and behind me. It was a buck sporting a symmetrical 8-point frame, most likely a 2½- or 3½-year-old. I was in college at the time and still a bowhunting novice, and this would be the largest buck I’d ever taken with a bow. He walked past my setup at 5 yards. I drew and made the rookie mistake of aiming with my arms and not my body. When a deer is that close to your stand and you are at full draw, bend at the waist to keep your anchor point consistent.

I shot high, and the deer bounded 15 yards away, uncertain what had just whizzed right over his spine. His confusion bought me enough time to nock another arrow, draw and shoot. The second shot hit the deer in what looked like the middle of his frame. On impact, his rear legs kicked backward and up like a bronco. He bolted as I sat shaking.

The real work was just about to start.

Every bowhunter strives for perfect shot placement, but every shot can’t hit the mark every time. Sometimes we make a lethal hit but compound less-than-desirable shot placement with mistakes in recovering the animal. A liver hit often leads to such a situation. The liver is tucked between the lungs and the rumen or stomach, so a shot that hits just slightly farther back than you would like will often hit the liver. If you think you may have hit the liver, remember these five steps to make sure you give yourself the best chance at recovery.

Back Off Right Away

My experience was a classic case of a liver hit—because of where I saw the arrow hit on impact, the deer’s reaction, and the dark red blood I found on the ground and arrow. After giving the deer a half hour, I made the mistake of going after it. I kicked him up about 100 yards from where I shot him. It was at that point I decided to depart the woods for the night and come back the next day. If ever in doubt, give the animal time.

I was hunting by myself, so I didn’t have the luxury of having a friend to help me find the deer – or so I thought. My uncle, who lived about an hour from the property, volunteered to come help me track. His help was invaluable because a liver hit typically produces only small, sporadic drops of blood. Several times my uncle located blood when I couldn’t. More eyeballs help. Also, check your local laws and regulations regarding the use of tracking dogs. You can’t underestimate the nose of a well-trained tracking K-9.

Get Rest and Stay Hydrated

Don’t miscalculate your rest and how you feel before and during the track. Bring water and snacks. This was especially true for me since it was September and temperatures still reached well into the 80s. If you become fatigued, your motor skills and senses suffer, and you may give up the trail too soon. Also, you need to maintain high morale, and that starts with feeling rested and nourished.

Develop a system to mark the last spot you saw sign. Whether its tracks, blood or the site where you saw the animal, bring marking tape, glow sticks, toilet paper, or use the GPS application on your phone to track your progress. Don’t waste time and energy having to backtrack or – worse – getting lost. Take your time, and record your path.

A liver hit is a lethal shot, but it may take longer for the deer to expire than with a heart/lung hit. When you find the deer, it could still be alive. Bringing a weapon with you on any tracking job is a good idea but especially for a liver hit. 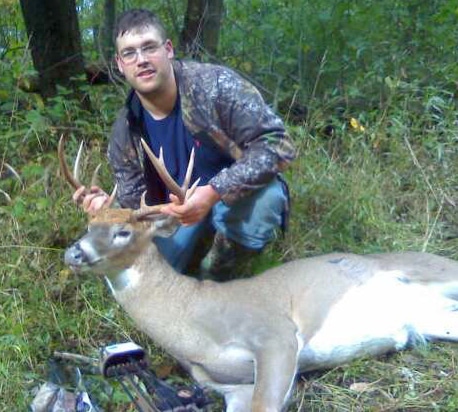 Fortunately, I was able to find my buck the next morning. He was on a trail only 100 yards from camp in the opposite direction from where I started to track. In total, the buck traveled about a mile and showed signs of bedding down on several occasions the night he was hit. There were times when blood was sparse and patience paid dividends. I’m hard-pressed to find a tougher animal than a whitetail, but every deer will succumb to a lethal liver hit. Follow these rules and stick with the trail and you will increase your chances of recovering your deer.

Jeremy Juhasz is a public relations and marketing professional from Atlanta, Georgia. When he’s not in the office, Jeremy is an avid bowhunter who has chased whitetails in Western New York, Pennsylvania, Ohio, West Virginia and Georgia. Follow him on Twitter @JeremyJuhasz for all things PR, hunting and Buffalo, New York sports.